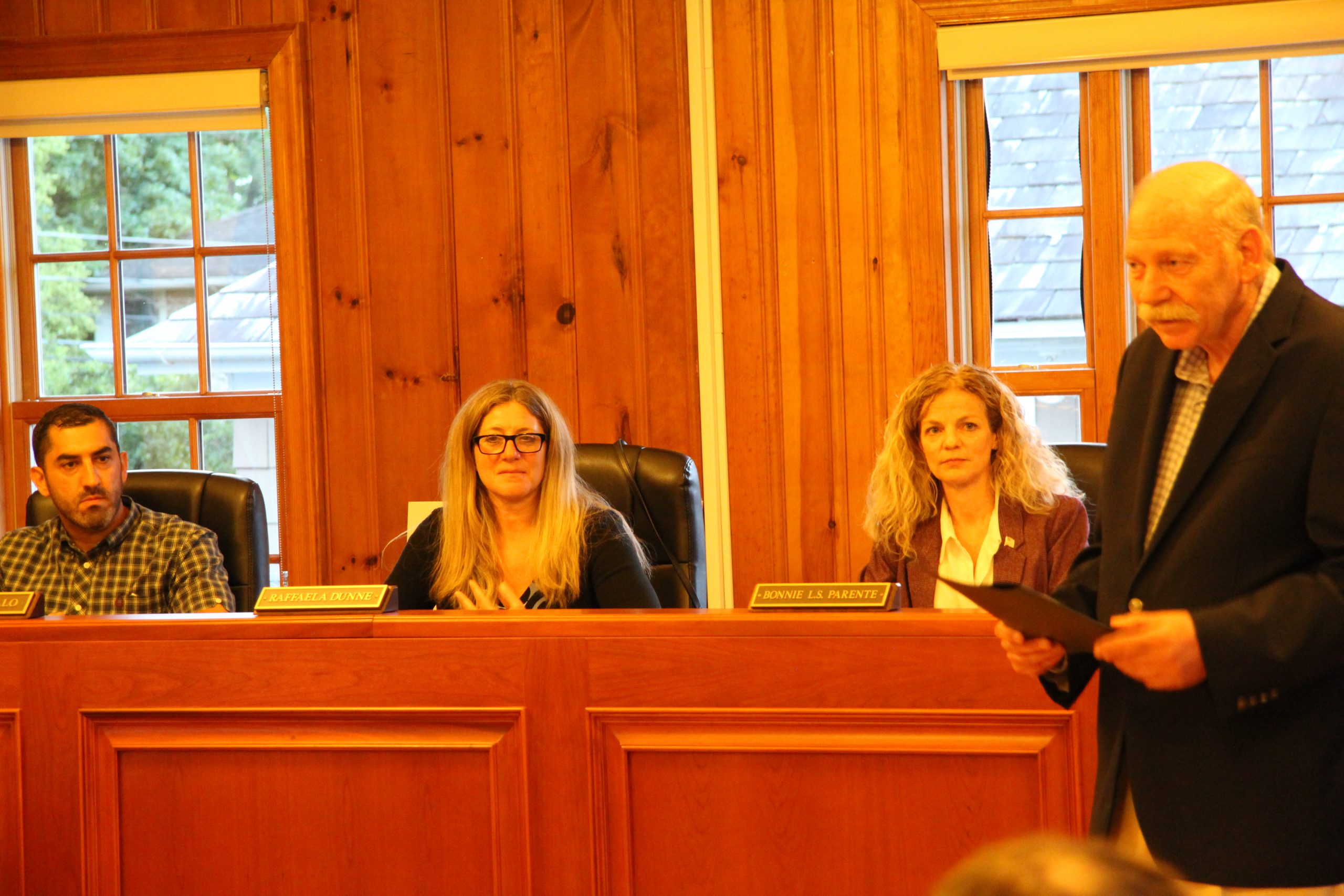 Though a local Boy Scout’s Eagle project and anecdotes of commercial traffic on residential streets were key points on the agenda, the retirement of a 34-year veteran from the East Williston Board of Zoning Appeals stole the show at Monday evening’s board of trustees meeting.

After years of practicing as a registered auditor and professional engineer, Richard Raab announced he would depart from his position with the village of East Williston. A graduate of engineering programs at Manhattan College and New York University, he also holds a juris doctor degree from St. John’s University and a license as a patent agent.

Raab is also a husband, father and grandfather.

Acknowledging the hard work that is done by every board and committee in the village, Mayor Bonnie Parente kicked off the trustees meeting with a statement on Raab’s departure.

Parente recognized how trustees on the Board of Zoning Appeals are “forced to listen to the cries of your neighbors,” seeking to build pools or home extensions, and how sometimes they have to say no.

Support local journalism by subscribing to your Blank Slate Media community newspaper for just $35 a year.

For Raab, serving on the board has been what he called “a very very rewarding experience knowing that it helps people.”

“One thing that I did like is coming here to talk to the neighbors,” Raab said, though he did recount “times where I had to run way down the block when a resident would run after me.”

Still, Raab defined the service the zoning board provides to the village.

“No matter what people say, the zoning board tries to help people,” Raab said. “They try to make sure that everyone gets a fair shake.”

Anthony Casella, who served as mayor of East Williston from 1991 to 1995, was also in attendance Monday evening. He called Raab a “fantastic guy” and noted the tough cases he had to oversee.

“How many people can stay on a board of a village through six mayors?” Casella added. “That’s an accomplishment.”

Though Raab’s retirement from East Williston public service was a celebratory introduction to the public meeting, business quickly moved onto traffic concerns expressed by residents.

Annie Stern has been an East Williston resident for over 30 years. She characterized the vehicle movement on Sagamore Avenue as a “chronic problem.”

“We constantly see these drivers zip through our streets ignoring stop signs,” Stern said. “We have always, always had that problem of having commercial traffic going from streets between commercial all the way to 18-wheelers.”

Parente and James Lark, a trustee on the board, explained to residents why efforts to enforce traffic laws on that street using a Nassau County police officer have been unavailing.

“We’ve had multiple meetings, multiple conversations, constant communication with the Third Precinct to the point where I’m sure they’re sick of taking phone calls from us,” Lark said. “Whenever they can send somebody they do, but like the mayor said, they’ve greatly expanded the precinct and they’ve reduced staff.”

Parente pointed out that East Williston cannot control the fact that Mineola’s section of Sagemore Avenue is designated an industrial street, not residential.

Concluding the village meeting waslocal Boy Scout Ryan Doan of Troop 201, who proposed the installation of recreational games that would satisfy his work towards becoming an Eagle Scout.

Located in the village greens, Doan proposed the construction of two tables and seats with games like chess, checkers and tic-tac-toe. The project would be self-funded through donations of game pieces and financial capital.