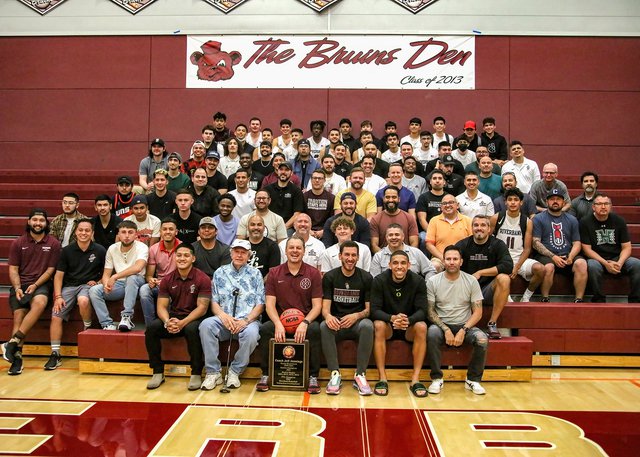 The Bruin boys basketball team kept the packed gym crowd focused on the tense outcome of its game against visiting Hughson last Friday night in the Fauria Gym. The disappointing finish, however, was not enough to dampen the enthusiasm of what was to follow the contest.

The large crowd was there to see basketball, granted, but also, it was there, more importantly, to help Head Coach Jeff Jennings celebrate his departure into retirement from the court.

And much of the crowd was made up of former players from his 20-plus year career on Riverbank’s hardwood. Also in attendance were many friends, family, school board members and staff, including current RUSD Superintendent Christine Facella, as well as former Superintendent Dr. Daryl Camp.

For those in the audience unaware of the pending festivities, the gym announcer told the crowd at halftime to “stay tuned” for the celebration, following the game. Jennings and the team, meanwhile, were in the locker room plotting second half game strategy.

Following the game, most people remained in their seats, including the visiting Huskies of Hughson.

The announcer took to his microphone to recount some of Jennings’ exploits while coaching.

Alluding to the pre-game ceremony that introduced the graduated 2021 seniors on the current team, he noted there was one more to celebrate.

“The final senior tonight is our one and only Jeff Jennings. Jeff attended school here and graduated in 1991,” the announced pointed out. “After college, he came back to Riverbank to teach and coach basketball.”

It was noted that Jennings has coached a total of 28 years here.

“These banners, (on the gym walls), these trophies (in the cases in the lobby), these student athletes, the basketball program’s reputation, are all here because of Jeff Jennings,” he said.

It was pointed out that Jennings “never made this program about accolades, or wins and losses. It’s always been about the student athletes and helping them through life by teaching them about respect, hard work, teamwork, but above all, family.”

As he closed, the announcer said, “As we know, this gym is named the Ray Fauria Gymnasium, who was the first principal here at Riverbank High School. But we also know, this gym, this house, was built by Jeff Jennings, congratulating him on his retirement.”

Jennings was then presented with a large plaque that noted many of his team accomplishments.

At the bottom of the plaque, “Nothing Given, Everything Earned” was inscribed.

After the ceremonies, many of the people observing from the stands, most of them former players, gathered on the court to individually congratulate Jennings.

Following, they adjourned to the bleachers at the far end of the court, where the RHS senior class usually sits during rallies, and posed for group photos. Many individual and small group pictures were taken as well, celebrating the culmination of a successful coaching career.