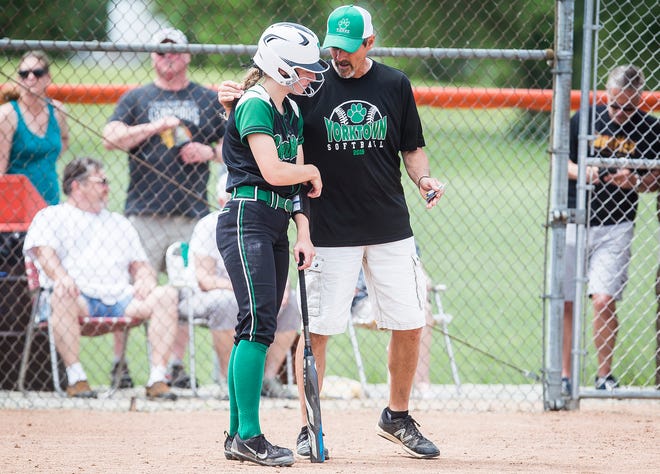 YORKTOWN, Ind. — Jeff Berger had his letter of resignation written up, but he didn’t send it until the last minute.

Berger, Yorktown’s head softball coach, knew he was going to be retiring from his full-time job at CenterPoint Energy next year. He knew he and his wife were going to head down to northeast Tennessee where they have 270 acres of land waiting for them. Berger said he loves the outdoors, so having the choice to spend time in the woods and on the lake with no work-related responsibilities seems like a no-brainer, right?

But for Berger, the decision was harder than that. Since 2007, Berger has spent almost every year coaching softball in some capacity in East Central Indiana. He was the head coach at Cowan (2009-13) before taking over the Yorktown head coaching job in 2015.

►GET ALL YOUR AREA SPORTS COVERAGE ALL YEAR LONG: Subscribe today using the link at the top of this page.

He knew he wouldn’t officially be leaving for Tennessee until next summer and thought about coaching the Tigers for another year, but ultimately decided against it. If he was going to coach, he wanted to be able to put all of his energy into it, which he didn’t think he’d be able to do next year. Berger publicly announced his retirement last week.

“I had my resignation all typed up and I waited until the very last minute because I was still just pondering,” Berger said. “I really hated to leave, I really hated to do it, but I finally just did. … I said ‘I don’t want to stay and regret it and have too many things on my mind with what’s going on with retirement.’ It’s a job and it’s something I’ve got great passion for and I want to put everything I’ve got into it and I wasn’t sure I was going to be able to do that.”

Berger has been one of, if not the most successful softball coach in the area over the past decade or so. He started coaching his kids in Little League and served as an assistant on Cowan’s staff prior to helping the Blackhawks to their first, and only, state finals appearance in his first year as their head coach.

Between his stints at Cowan and Yorktown, Berger took some time off to watch his daughter play in West Virginia. But even a few years away from coaching didn’t slow down his team’s successes. Berger walks away from Indiana high school softball with five sectional titles (three at Cowan, two at Yorktown), three regional titles (two at Cowan, one at Yorktown), one semistate championship (Yorktown) and two state finals appearances (Cowan in 2009, Yorktown in 2019).

There’s been plenty of success and big games that Berger has been a part of. But, in his mind, there’s one game in particular that stands out.

“I would say that, the game that I’ll always remember the most would be our 2019 regional game against Belmont,” Berger said. “In 2018, we played them at Belmont for the regional championship and they beat us 4-2. The following year we had to play them at home and they came in undefeated and we beat them 6-0. It was just an exciting game and the whole team was clicking and I’ll never forget that game.”

Berger could’ve added some more championships this past season, too. Last spring, Yorktown was ranked in Class 3A all season and lost to Guerin Catholic, the eventual Class 3A runner-up, in a 1-0 extra inning game in the sectional championship. The year before, following Yorktown’s 2019 state runner-up finish, the season was cancelled due to COVID-19.

Looking back at it, Berger said he couldn’t have imagined the amount of success his teams have had when he began coaching more than a decade ago.

“No, and that all attributes to the fact that I just had good athletes, I had good players,” Berger said. “You know, they liked to listen and learn and it makes it so much easier when you’ve got good athletes and Yorktown was, you know, they’ve got a good feeder system. A lot of girls play together ever since they’re in kindergarten on up and it just makes my job so much easier and I really enjoyed my time coaching there and I think they’re going to continue having success there.”

Yorktown graduates plenty of talent, including several players who will go on to play collegiately, from last year’s team. Among those coming back includes experienced players in seniors Macie Dowd and Alanah Jones, juniors Lexy Morris and Jenna Sylvester, sophomores Caitlin LaFerney and Ava McNally and more.

Even without him, Berger is confident in their future success and he’ll be keeping track of the Tigers from afar. He might even get back into coaching down in Tennessee, who knows? First, however, he’s going to build a house and a pole barn.

When Berger posted a “Thank you” from the Yorktown softball Twitter account, several of his former players, coaches and administrators thanked him for his impact. As much as he enjoyed coaching, his players and assistants seemed to enjoy working and playing on his teams.

“I’ve enjoyed it every year,” Berger said. “I’ve been blessed with some very good teams.”

Robby General covers Ball State and East Central Indiana high school athletics for The Star Press. Contact him via email at rgeneral@gannett.com, on Twitter @rgeneraljr or phone at 765-283-8864.