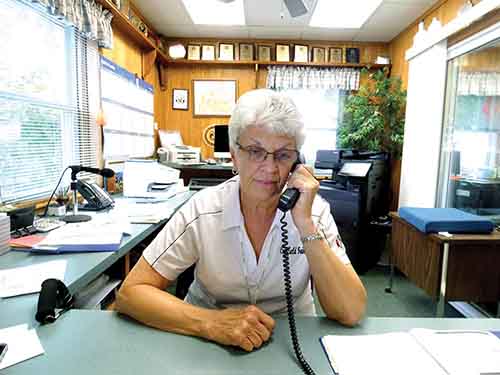 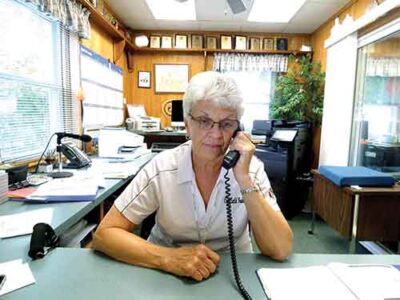 Staff photo / Nathanael Hawthorne
Nellie Drevna, a secretary with the Canfield Fair, answers the phone and any questions patrons of the fair might have. This year marks Drevna’s 40th year working at the fair, and she looks forward to working the fair every year, saying she would work “as long as she can.”

CANFIELD — For the last 40 of the Canfield Fair’s 175 years, Nellie Drevna has been working in the administration building and shows no signs of slowing down.

“I’ve always liked the fair and just working here has been a real treat,” Drevna said.

Drevna started working in 1981 to fill in as a secretary. From there, her involvement with the fair has been on an annual basis.

“I started here originally when my daughter was born and I was not teaching that year,” Drevna said. “The woman that was here at that time, the secretary, asked if I wanted to fill in for her, so I started that.”

Prior to her retirement as a music teacher with Western Reserve Schools, Drevna said she would work for two weeks before the fair started so it wouldn’t conflict with her teaching schedule. When she retired, Drevna said she was able to then work from the middle of July to the end of September.

“I enjoy the fair so much; I just come and help,” she said.

Before she started working at the fair, Drevna said she attended the fair every year since she was a little girl.

“My folks used to show flowers here when I was young, so I started coming to the fair when I was very young,” she said. “I’ve only missed one fair because I broke my back in 1964 so I wasn’t able to come. Every year after, I’ve been here.”

When she was able to dedicate more time to the fair, Drevna said she scheduled personal things, like surgeries, around the start or end of the fair.

“I had back surgery this summer again, too, but I always schedule things so they happen before or after the fair. I kind of work around the fair because I really do like it,” Drevna said.

As one of the secretaries, her day typically begins at 7:30 a.m.

“It’s usually not too busy right then, but when the phones start, it’s question after question,” she said. “A lot of them is if we have scooters or if the fair is open this year.”

As for her involvement in the future, Drevna said she will keep working at the fair as long as she can.

Drevna said there haven’t been any monumental changes, aside from the size of the fair, in her four decades there.

“When I first started, the fair wasn’t as big as it is now. People come year after year,” she said. “After not having a fair last year, this year … people came up buying ticket after ticket and would say how much they missed the fair.”

Even with the cancellation last year, Drevna still worked — on a limited basis.

“I did work last year, but it was so different because they moved the Junior Fair, so there were very few people here at all,” she said. “The first day I came back last year, July 1, was when they called the fair off. That was disappointing.”

Drevna said she didn’t have a doubt about returning.

She said her favorite aspect of the fair simply is working.

After 40 years, Drevna said her favorite story regarding the fair was the “complete surprise” Friday when she was honored with a cake, recognizing her for 40 years of dedication.

“They totally shocked me with the cake — I had no idea,” she said. “They brought me in the board meeting and just talked about me. … I was happy, but really shocked. I’ve thoroughly enjoyed working here. I just really enjoy the fair; I always have and working here is a real plus.”