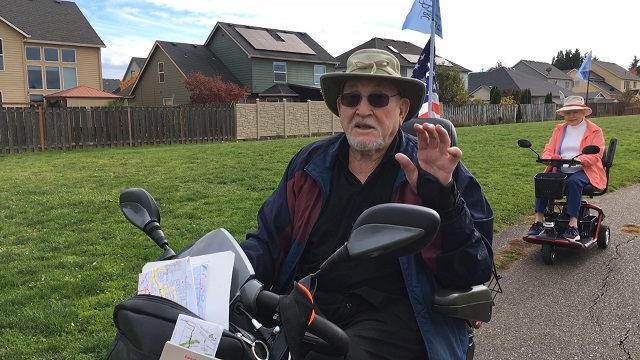 Now between eight and 12 people join Hays for a scooter ride up to five miles each Friday. Hays plans the trips ahead of time, scoping out the local trails on area maps.

It started with his friend Ole Barker, whose husband Bert used a mobility scooter to get around. Bert wanted to take day trips outside, but needed somebody to take him.

Hays also needed a scooter to get around but agreed to go with Bert to help him navigate.

“He had so much fun that I said well, ‘you want to go again here?’ So I took him a second time…and I said, ‘I’m going to start a club’ and that’s how it started.”

His friend Ole even joined the fun. Though she doesn’t need a scooter to get around, she bought one just to go on the weekly outings and be closer to her husband.

“We’ve become really close friends, all of us. And so it’s socializing plus getting out and seeing the fresh air, having all the scenery around here, trees and ducks and birds, all the good things in life,” said Ole Barker, 95.

Ole helps organize the Laurel Parc Scooter Club as its secretary while Hays oversees the logistics of the journeys. It’s a smooth operation for the most part but occasionally a participant will forget to charge their battery the night before, according to Hays.

Each time that happened, he’s brought back the stranded rider by having them ride in his scooter — in his lap — back to home base. He coordinates the dead scooter to be picked up by an SUV and brought back.

Hays has experience leading a fleet on an adventure and returning them home safely. He’s a retired lieutenant colonel of the United States Air Force who once survived a plane crash over then-Yugoslavia in Europe during WWII.

“I had to fly it into the ground at 165 miles-per-hour. Otherwise, it wouldn’t fly,” Hays said.

The plane had been disabled by a drop tank that crashed into the windshield and took out part of its tail, he explained.

“I ended up upside down in a grape orchard. And I couldn’t even see out, I was underground,” Hays said. “They finally had to dig a trench alongside the airplane and cut the side of the airplane out with axes.”

Remarkably, he was unscathed.

He recalled another time where a fly leader was misleading the fleet on the route back to home base from Germany. He pleaded with the pilot to follow him — but the pilot disagreed — and Hays veered from the group, making it back safely. Hays survived but the lead pilot ended up leading the group of four into a mountain north of the airbase, where they all died.

Hays further put his strong navigation skills to use when he served in Oregon’s Mounted Posses for 16 years, a volunteer group of horse-mounted search-and-rescuers. He served as president of the statewide organization for two years.

“I was just kind of born to help people,” Hays said.

He added that running the club has been taxing at his age so he’s currently seeking a replacement to take over his duties. The club is only growing in popularity though, with another retirement home nearby expressing interest in starting their own scooter group.

Laurel Parc has been supportive of the club, providing flags for riders in exchange for free advertising.