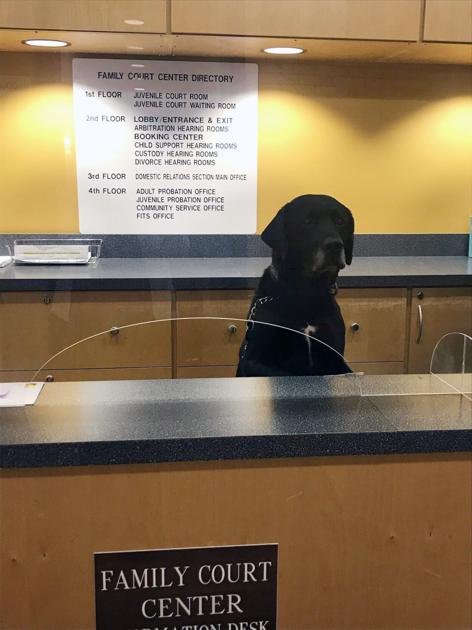 “He’s earned it,” said K-9 deputy Kristie Salzman, who has worked alongside Obie since he joined the department at age 2 in 2016. “I’m excited to celebrate him. He’s had a really fulfilling career.”

Obie served as the department’s first K-9. His successor, Sammi, has big paws to fill.

“He was our first dog. He was everything we needed to begin and proceed with the program,” said Salzman. “He was one of those dogs. He brought comfort just by simply being here. People just loved him.”

In his five years, that’s 35 canine years of service, Officer Obie saw it all, Salzman said. He sniffed out bombs, tracked missing persons and suspects and – perhaps his favorite job – visited students as part of an outreach program.

“To see the way he interacted and the way he looked forward to seeing the kids,” always made Salzman smile, she said.

A typical day on the job consisted of sweeping Washington County Courthouse and Courthouse Square, and responding to calls.

Obie once tracked a homicide suspect; he didn’t catch the alleged murder, but he and another K-9 led officials closer to their target, Salzman said.

Another time, Obie and Salzman were called to a school district outside of Washington County to sweep a school building after the district received a bomb threat.

“We arrived, he jumped out,” recalled Salzman.

When one student in particular saw a bomb dog on scene, “There was a confession prior to us even having to search,” she said.

Salzman said she is going to miss her partner but concedes he’s ready to be a civilian dog.

“Up to this point, he’s had a really strict diet to keep him healthy,” said Salzman, who added aside from the occasional scrambled egg, Obie hasn’t been allowed to indulge in people food. “He’ll get to get spoiled a little bit more and actually play ball, not as a reward for doing a job, but as a reward for being such a great dog.”

She said they are both looking forward to celebrating his retirement surrounded by Obie’s former co-workers and those he – and his wagging, docked tail – served.

“He’s had a very fulfilling career,” said Salzman. “That dog has taken me into locations that, honestly, willingly I wouldn’t have gone on my own. That dog has been through it all. He did the work. He’s worth his weight in gold.”

Tickets for Obie’s retirement party are available at the Washington County Sheriff’s Office. All donations benefit the county’s K-9 program.