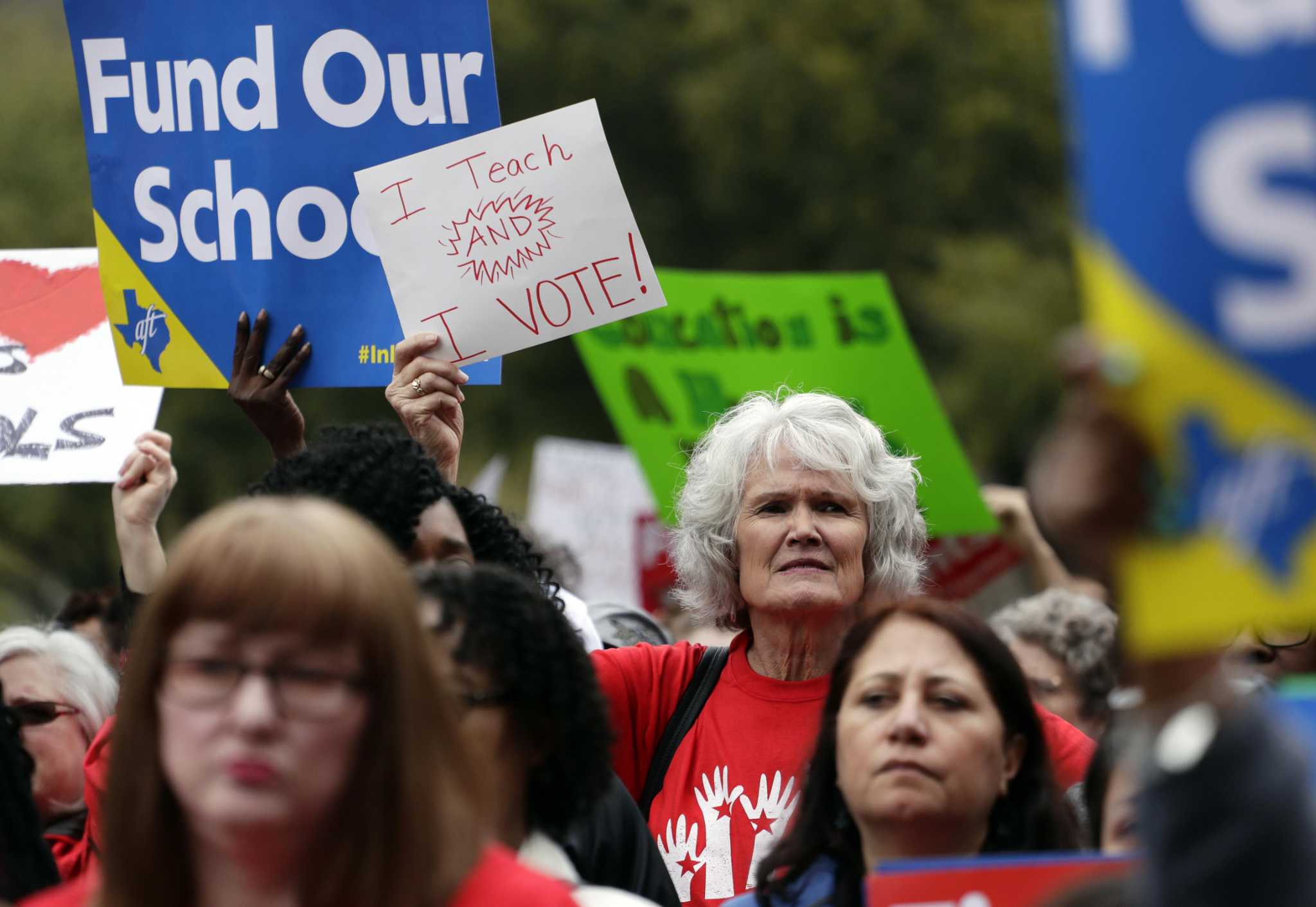 While the vast majority of Democrats in the Texas House continue to camp out in Washington, D.C., Republicans are berating their colleagues for blocking not only the GOP’s priority elections bill, but also a proposal to send retired teachers a one-time pension bonus.

Last week, the Texas Senate passed a bill authorizing the so-called 13th check to the state’s more than 400,000 retired teachers equal to their monthly annuity or $2,400, whichever is less. Republicans have since convened news conferences and meetings with retired teachers at the Capitol in an effort to shame the absent House Democrats for holding up the measure, which would cost the state an estimated $701 million.

House Speaker Dade Phelan, R-Beaumont, last week demanded that Democrats “get back to Texas to pass legislation that would provide a 13th check for retired teachers,” among other items. And one of the speaker’s allies, state Rep. Dustin Burrows of Lubbock, posted a photo of himself with one of his former teachers who visited Austin to discuss the bill.

“I told her if only 18 Democrats would show up for work, we would pass this legislation!” Burrows tweeted.

House Democrats have been quick to point out that nearly their entire caucus signed onto the bonuses in the spring, only to watch the proposal die in a Republican-controlled committee — a committee led by Burrows.

“Texas House Democrats supported both a 13th check and a cost-of-living increase for our retired teachers during the regular session. Yet, Governor (Greg) Abbott and Republican leadership drowned those measures to keep dangerous and partisan bills afloat,” said state Rep. Rafael Anchía, D-Dallas, who chairs the House Pensions, Investments and Financial Services Committee, which advanced both bills.

RELATED: Texas Democrats spurn House speaker’s offer to fly them back from D.C.

All but three of the 67 Democrats in the House signed on as authors of the bill, while 17 Republicans declined to do so — a number of them allies of Phelan, including Burrows, chairman of the House Calendars Committee, which controls which bills reach the House floor and did not advance the measure on the 13th check.

Since April and May, when House members were considering the bill, Comptroller Glenn Hegar has revised his estimate for the amount of revenue Texas will collect in the next two fiscal years, giving lawmakers more money to spend during special sessions and when the Legislature meets again in January 2023.

“The economy has improved following the pandemic and subsequent recession as evidenced by the comptroller’s revised biennial revenue estimate released on July 7,” Phelan spokesman Enrique Marquez said in a statement. “The state has several billion dollars in available general revenue that was not available to use during the regular session, and we want to commit a portion of it to a 13th check for retired teachers when House Democrats finally return to work.”

Texas teachers union officials have sided with Democrats in casting blame on Republicans for the stalled checks.

Zeph Capo, president of the Texas American Federation of Teachers, said union members “share deeply in the disappointment of hardworking retirees who potentially lose this chance at a 13th check,” though he disputed claims by Phelan and other Republicans that the state lacked the funds to approve the bonuses in May.

“Thousands of AFT members wrote letters to their senators demanding a 13th check,” Capo said in a statement. “Retired educators should not be used as pawns in divisive political debates and partisan fights. The governor and the Legislature had five months (not to mention all the preceding years) to support retired teachers and did nothing, but now they want to use political opportunity to cast blame elsewhere.”

Still, the budget approved by lawmakers for the next two fiscal years provides $5 billion for the Teacher Retirement System’s public education and higher education retirement funds, an increase of about 8 percent from the current two-year period.

TEXAS TAKE: Get political headlines from across the state sent directly to your inbox

In April, the Texas Retired Teachers Association said the pension fund value had reached an all-time high of $185 billion, citing the figure in pushing lawmakers to approve a cost-of-living adjustment during the regular session.

During the Legislature’s spring session, Rep. Giovanni Capriglione, R-Southlake, filed a bill that would have provided a 6 percent cost-of-living increase for retired teachers, capped at $100 a month. That bill also had broad bipartisan support but died in the House Calendars Committee.

A similar proposal in the Senate was never taken up either.

After Capriglione’s bill died, the executive director of the retired teachers association, Tim Lee, asked Abbott in a letter to add the cost-of-living adjustment to the agenda for the special session, which began July 8. (The governor alone controls which topics lawmakers can consider during the 30-day session.)

Rep. Greg Bonnen, a Friendswood Republican who chairs the House Appropriations Committee, and Rep. Jim Murphy, R-Houston, had said the retired teachers pension fund would no longer be considered financially stable if it granted a cost-of-living adjustment, or COLA, at that time. But they kept the door open to doing so in the future.

“The COLA money would come directly out of the TRS retirement fund itself, and it doesn’t have the actuarial strength to do that,” said Murphy, a former chair of the House pensions committee. “It’s something that we would like to do, but you have to be within the financial parameters that are offered to you at the time. That’s why we’re standing here today saying, let’s do the 13th check. COLA, it’s something we can sure talk about.”