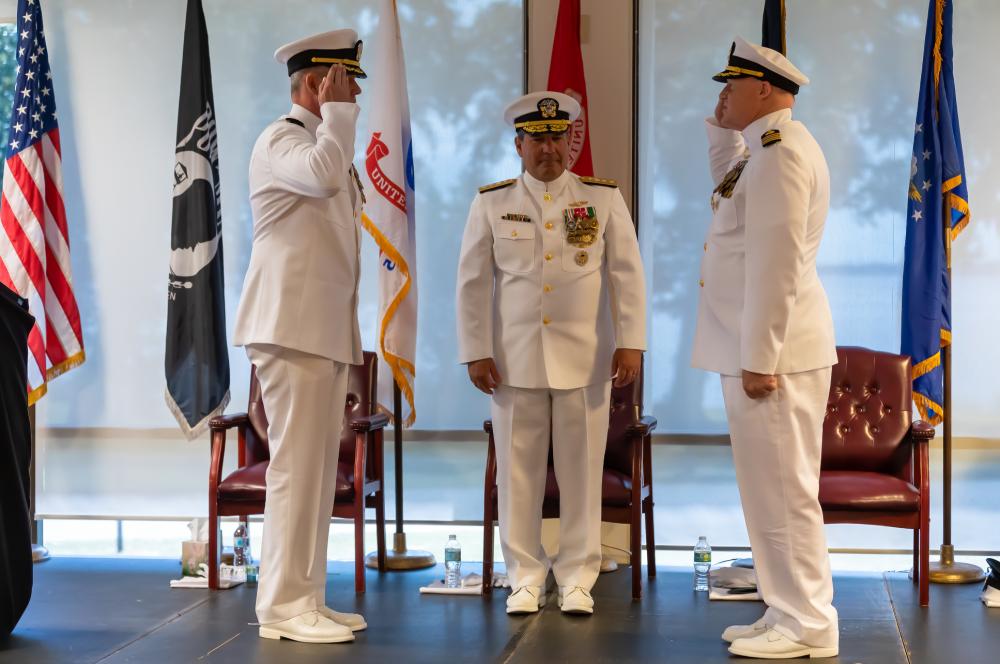 While Clarke was in command, NAVSUP FLC Jacksonville saw many organizational achievements including the rollout of a new contracting procurement tracker tool called ProTrack that is now in use around the Fleet; the renovation of warehouse spaces at NAS Jacksonville and subsequent launch of a new program pilot for managing repairable aviation parts; and Clarke expertly led the team that provides contracting, fuels and logistics support to units operating in the southeast region and U.S. Naval Forces Southern Command & U.S. Fourth Fleet area of operations during a period of high operational tempo.

“While I was the Fleet Supply Officer I witnessed, first hand, how Navy leadership depends on NAVSUP and FLC Jacksonville to respond in a dynamic environment,” said Rear Admiral Peter Stamatopoulos, commander, Naval Supply Systems Command and Chief of Supply Corps.

“This environment spans from generating ready forces—submarines, airplanes, ships and expeditionary units—supporting SOUTHCOM operations and multi-lateral exercises with partner nations and navies, to supporting hurricane response and disaster relief operations both in the U.S. and surrounding nations,” Stamatopoulos then went on to praise the expertise gained and demonstrated by Clarke throughout his career.

Clarke, a native of North Carolina, is retiring after more than thirty years of naval service, which began as an enlisted Sailor in 1987. He went on to earn a B.S. and an MBA from Elon University, followed by Officer Candidate School in 1995. Clarke was later one of the first Supply Corps officers to cross deck from a ship to serve as a department head on a submarine when he transitioned from USS Vella Gulf (CG 72) to USS Kentucky (SSBN 737) in 1999. He went on to serve aboard USS Iwo Jima (LDH 7) and as Supply Officer for USS Harry S. Truman (CVN 75). Additionally Clarke served at Naval Air Station Sigonella, Sicily; OPNAV N80; NAVSUP Weapon Systems Support and DLA Troop Support.

“I seriously love what I do and love solving hard supply chain and logistics problems. I am proud to wear this uniform and truly honored to have served,” said Clarke. “Stacy and I have been blessed to have met some wonderful people across this amazing country and around the world.”

Clarke’s relief, Captain Jim Strauss, gains command after a tour as Executive Officer, NAVSUP FLC Norfolk. “Jim has served on multiple Ships, overseas at CTF 53 in Bahrain, and as SUPPO of the USS George H.W. Bush,” said Stamatopoulos during his remarks. “Jim [Strauss] possess the right sight picture to lead this organization and help improve the Fleet’s lethality.”

Strauss expressed his enthusiasm for taking the helm of NAVSUP FLC Jacksonville by saying,

“I am truly humbled and honored to take command of this prestigious, storied, and strategic organization. CAPT Clarke, like his predecessors, led this command with honor, integrity and vision. I will endeavor to do the same.”

This work, NAVSUP FLC Jacksonville conducts change of command and retirement ceremony, by Jessica McClanahan, identified by DVIDS, must comply with the restrictions shown on https://www.dvidshub.net/about/copyright.