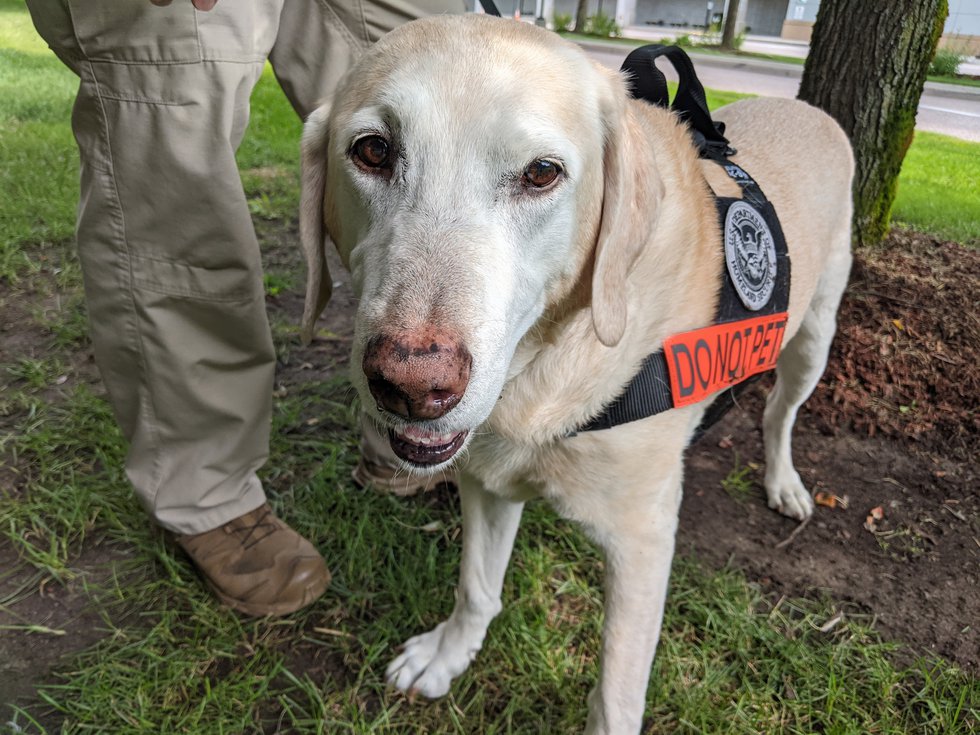 It doesn’t take much for TSA K-9 Cooper to tell whether a passenger is cleared to fly, giving travelers at the Burlington International Airport the literal sniff test.

And when Cooper detects danger — in the form of a decoy — he gets lots of praise from handler Bob Banach, and a game of tug-of-war.

Cooper always gets to win. That’s also part of their ritual. “This interaction between us, when he does something good, this is what he loves really, develops that bond well between the handler and the dog. Right bud?” Banach said, praising Cooper.

Banach has been with Cooper each sniff of the way. “He was a year old when I was paired up with him,” he said. They were part of the TSA’s first passenger screening K-9 class that was instituted after security officials realized they needed to train dogs to detect explosives on moving targets and in airport crowds. That was 10 years ago.

Reporter Cat Viglienzoni: Is 10 years a long time for a TSA K-9 to be on the job?

Bob Banach: It is.

They worked for six years at Washington’s Dulles Airport before Banach wanted to come back home to Vermont. For the last four years, they’ve patrolled the curb, gates, airplanes, the parking garage, and even on occasion a local school if there was a bomb threat. But the 11-year-old yellow lab is getting a bit of arthritis in his hips and Banach says it was time to teach a new dog the old tricks. “You know what, you worked hard. You deserve a good retirement,” Banach said.

Bob Banach: Not yet, it’s still early for him. Every morning when I come out in my uniform, he’s already at the door wanting to go to work… It’s still hard for me to believe he’s not working with me every day. I’m with him more than I’m with my wife, you know?

Reporter Cat Viglienzoni: So you said you spend more time with Cooper than you do with your wife. What is your bond like?

Bob Banach: It’s a really tight bond. It has to be tight because you’re working together. If I’m having a bad day and I come into work, we say it travels down the leash to the dog. He knows if I’m having a bad day. So, I have to be positive all the time so he’s happy and he’s ready to go to work. Work has to be the best thing for him, better than being at home. Because, you can’t turn them into pets. Then they’re going to be lazy and they won’t want to leave home to go to work. So, work has to be the best thing. They have to have a good time.

That’s a lesson we could all learn from this retiring K9 and his handler — work is fun when you make it a game. But retirement also has its perks. Cooper gets to sleep in now. The vest that once warned travelers “do not pet” now reads “do pet.” And he’s still in charge of inspecting anything that enters Banach’s household. “It’s pretty much 24/7, the nose is always going. UPS will drop off a package at the door and he’s sniffing it, he’s all over it, which is ok with me,” Banach said.

Cooper’s replacement, Donna, is a German shorthaired pointer. She’s also with Banach and he says the two of them get along well.