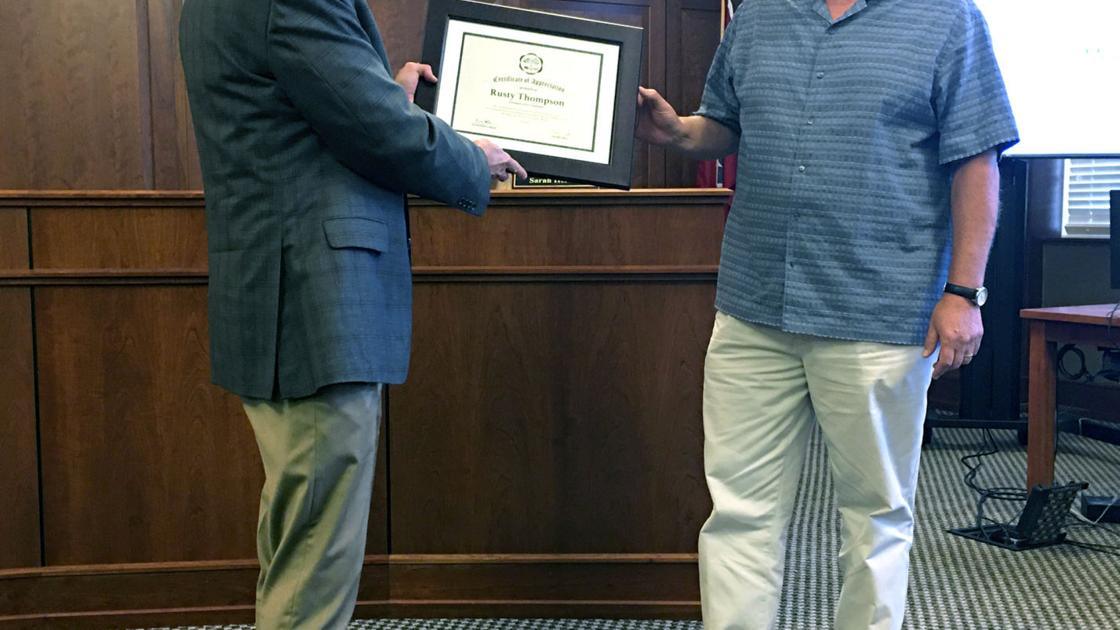 Rusty Thompson, Debbie Ryan and Tammy Hankinson each were honored with a plaque and multiple rounds of applause from city officials and employees during the Sept. 7 council meeting.

Thompson worked in the Development Services Department and was with Maryville for 26 years.

Ryan retired from the Finance Department with 40 years of service.

Hankinson, who also retired from the Finance Department, was with the city for 23 years.

“The support the city has given me for 26 has been outstanding,” Thompson said, praising Building Official Gary Walker and City Manager Greg McClain. “It’s been a great place to work and raise a little girl.”

Hankinson wept as she embraced Mayor Andy White. “Thank you, everybody,” she said. “It’s been a rough year for me and I appreciate everything everybody’s done.”

“We love you, Tammy,” McClain said.

Finance Director Mike Swift praised Hankinson’s work. “One thing she mentioned to me is that she’d get a lot of calls where people just wanted to talk,” Swift said. “She’s a great listener.”

He also had praise for Ryan, who he explained, has worked in a number of different roles since she started with the city four decades ago.

“Yeah it is,” Ryan agreed to laughter, joking, “I started as a child.”

“That’s the only thing that makes sense,” Swift quipped back. He then added she’d done a great deal for the city and helped many citizens “deal with their issues.

“We really thank you for that,” he said.

Like other local governments, Maryville is seeing a handful of retirees each year. But they’re also bringing on new employees as well.

For each of the three people who said goodbye to the city last week, human resources is bringing new talent on board in both finance and development services.

“It is our slogan that ‘People are the key to the city,’” White told the three retirees and an audience gathered to honor them. “And they are. I’ve said a thousand times before and I think speak on behalf of everyone sitting up here when I say folks like you who are out there on the day-to-day, you make our job easy.”

White was joined on the dais by fellow council members in several rounds of standing ovations for the exiting employees. “We appreciate that and we appreciate all your service.”