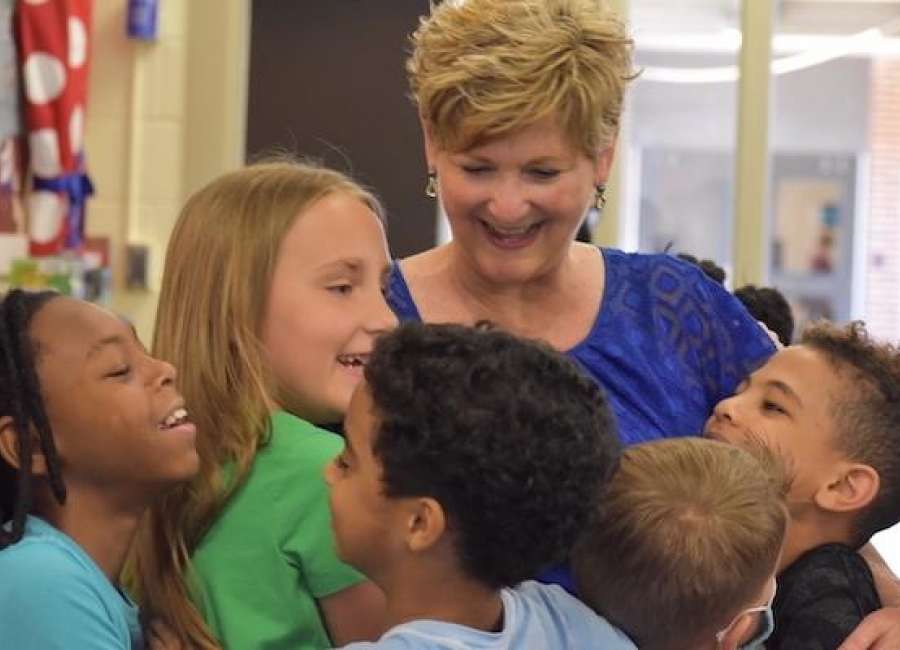 It has launched hundreds of Ruth Hill Elementary School students into success, and the school’s library now bears the name of the media specialist who dreamed it into existence.

The Anne Graner Launch Pad Library was dedicated during a celebration of Graner’s years at Ruth Hill, which came to an end with the 2020-21 school year as she announced her retirement.

“I’m excited about having time to spend with my family and to revisit activities and passions from the past,” said Graner, who counts among those passions storytelling, pottery, yoga dancing, filmmaking and traveling. “I want to revisit them to see what spark is there now and to see what is ready to unfold into something new. It will be a journey of discovery!”

The birth of the Launch Pad Library

In 2018, she began transforming the school’s library into a multi-disciplinary learning space and program – the “Launch Pad Library,” which she envisioned as a way to better serve her students.

“We believe that the old type of library is not helping our kids,” Graner said at the time. “We think it’s much better for them to be in an environment where they can explore what they’re curious about.”

So out went the traditional setup. Books were organized by topic and placed into “learning portals,” and the library was outfitted with equipment like musical instruments, recording and video equipment, a sewing machine, construction toys and tools, a 3D printer and specialized computer programs. Community and business leaders attended an open house to learn about the new undertaking, and many became enthusiastic volunteers and sponsors.

Students wrote proposals for projects in areas that interested them, but there was a catch – to be approved, their projects had to benefit others. Among early projects were sewing lap pads for their schoolmates in the autism program, fidget toys for those who had trouble focusing in class, and designing and printing 3D items to sell as a fundraiser for a local charity.

While Graner took a traditional path into education, her “side trips” equally helped to shape her career, which began in 1979 in a DeKalb County elementary school. She was heavily influenced by her mother, who taught in a one-room schoolhouse in an African village.

“When I first stepped into a classroom as a student teacher, I knew I was home,” Graner said.

She has trained volunteers for the Georgia Council on Child Abuse and trained educators on teaching writing, and she has taught all grades and a variety of subjects in public, private and Montessori schools.

Additionally, Graner is a certified life coach, a documentary filmmaker and videographer, a professional storyteller, and a creative movement and YogaDance teacher. She has volunteered with disabled adults, served on educational advisory committees and been involved with Christian education, outreach, worship, and health and healing programs.

“Everything I’ve learned in these different arenas I’ve incorporated to make learning fascinating for my students,” Graner wrote in a Teacher of the Year essay. “Occasionally taking time off from teaching to learn new skills helped me stay fresh and connected to real-world issues.”

She said her experiences led her to envision a school library as not just a “repository for books,” but instead a “dynamic, multimedia learning environment where students are creating content and reaching far beyond the school walls.”

From ‘chronically failing’ to today

At Ruth Hill Elementary – a school with a high percentage of economically disadvantaged students – that was especially important. Based on 2016 standardized test scores and CCRPI, Ruth Hill was placed on the “chronically failing schools” list by the Georgia Department of Education, and was identified as the Coweta County School System’s “most struggling school.”

By the time Ruth Hill made Georgia’s list, a long-term improvement plan already was in place. The plan included extra personnel and support, tutoring before and after school and on weekends, flexible instruction time and academic parent-teacher teams.

“We knew our kids were not making the progress we wanted, and that made us focus more on what we were doing in the classroom,” Principal Aaron Corley said at the time.

Students and their families also benefited from the Launch Pad Library’s innovative, hands-on learning programs, which offered several different approaches to connect classroom work to the real world. Staff made home visits to their students and got to know the families of the community, and Graner led a Bookmobile-style effort to get books in the hands of students without summer access to reading materials.

By the end of 2017, Ruth Hill students had made significant gains in every area of Milestones testing and the school was removed from the “chronically failing list.”

As the Launch Pad Library has grown and evolved, other efforts have grown up around it. In 2019, Graner helped Ruth Hill students research community issues, and the students settled on homelessness and its effects on children as the center of a service project called “Sweet Dreams.”

In October of that year, Ruth Hill enlisted the community’s help in meeting a 16-day challenge to fill 100 bags with a new stuffed animal, blanket and paperback book, along with quick-dry washcloths and travel-size toothbrushes, toothpaste and soap. Fifth grade students packed the bags, and many items were donated from community members and businesses.

Graner entered the project in an Atlanta radio station giveaway contest, calling the idea of winning “a pipe dream,” but Ruth Hill won the grand prize of $10,000.

But it’s the day-to-day interactions that students – and Graner – will miss.

Class after class filed into the Launch Pad Library on Friday, May 21, to deliver flowers, songs, homemade cards and gifts as a fond farewell to their media specialist. One class even spelled out “G-R-A-N-E-R” with note cards, naming an adjective for each letter.

Colleagues and family members lured her outside under the guise of taking photos, and Corley surprised Graner by revealing a brass plaque reading “Welcome to the Anne Graner Launch Pad Library, Dedicated Spring 2021.”

Friends and colleagues from all areas of Graner’s life joined the celebration via video to celebrate her retirement as well. Corley praised her passion and her ability to give students experiences at Ruth Hill they couldn’t get anywhere else.

“You’ve done so much in such a short period of time,” said Corley, who thanked her for “making everything about the students.”

“We know that you will continue to impact the community and world around you, just like you did at Ruth Hill,” he added. “We know that you’re going to do amazing things.”