Founder Ray Tschillard to retire at the end of June 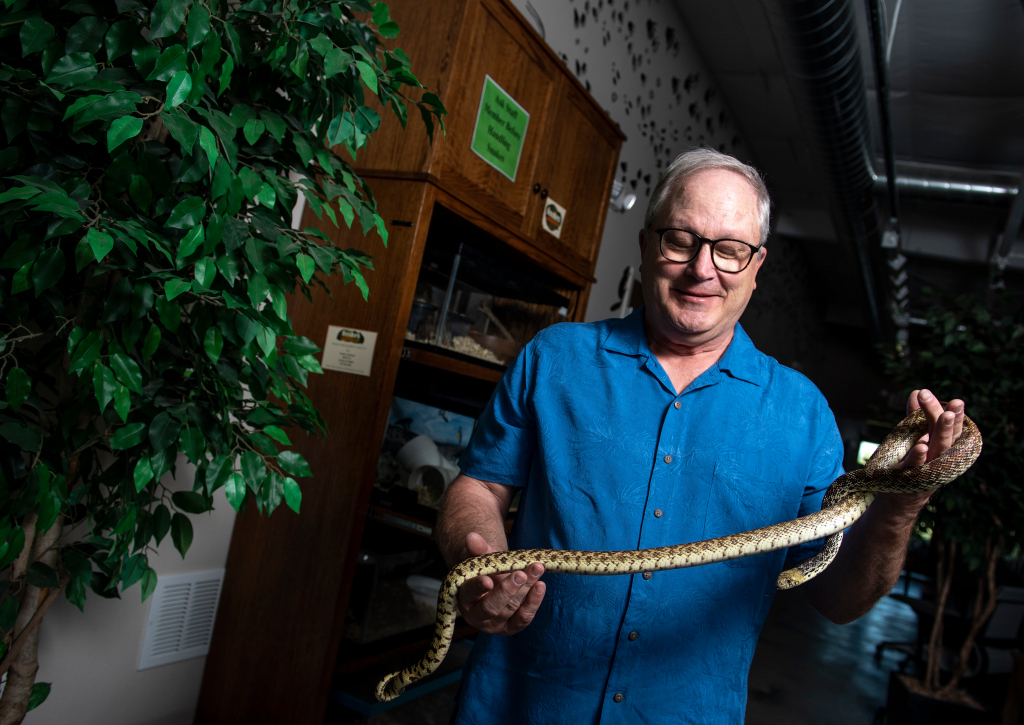 He wins them over, genuinely and kindly. Having bowls of candy at evening planning sessions reinforced his friendly demeanor.

The development of an outdoor environmental learning site more than 30 years ago, now known as the Poudre Learning Center in west Greeley, was a concept he realized growing up in Iowa and later as a science teacher.

Bringing such a place to life requires vision, determination and collaboration. And chocolate.

“That bowl of candy is the hallmark of Ray’s hospitality gene,” said Poudre Learning Center Chair of the Board of Directors Bill Hoyt, a longtime friend. “He welcomes people into the discussion and listens to you, and he finds where your passion lies. He makes people feel their contributions are critical and valued and important.”

Tschillard, 67, a former University Schools teacher and science coordinator for Greeley-Evans School District 6, is retiring later this month, after 16 years as the director of the Poudre Learning Center (PLC), which is located south and near the Cache la Poudre River and west of 83rd Avenue.

Tschillard not only served the PLC as an administrator. He was among a group of educators and naturalists who started the center that sits on about 200 acres of open land dedicated to environmental education.

Hoyt, a professor emeritus of oceanography at the University of Northern Colorado, was also involved in the center’s formation, along with now-retired state biologist Larry Rogstad, who continues to serve as a volunteer and advisor at the PLC.

A local source for environmental education with access to the outdoors is exactly what Tschillard and his peers wanted when they started discussing the idea in the mid-1990s.

They envisioned a place where students could see the practical application of their classroom lessons, such as holding a snake, watching a turtle or comparing their own “wingspan” to that of a bald eagle. And where curious adults and other community members might enjoy the same exercises — communing with nature and taking in fresh air without leaving Weld County.

There were only 60 or so acres when the learning center opened in 2005. In the first year, the center hosted about 6,000 students. Two years ago, before COVID-19, the number of students and other visitors rose to more than 35,000 a year. The majority of the school kids are elementary students, but older students visit too.

“We were looking for an opportunity here that puts students in the center, and they don’t have to explore somewhere else to see nature,” Tschillard said.

Tschillard grew up along the Mississippi River in Davenport, Iowa. He was outside a lot as a boy, exploring and looking around.

He recalled going to school and not having an opportunity to take the classroom learning to the outdoors through purposeful exploration. He remembered once bringing a snake into an elementary-grade classroom and the teacher asking him to take it right back outside.

The Tschillards reside in Greeley and have two grown children, a son and a daughter, and grandchildren.

As a teacher in Iowa, Tschillard had to plead his case to a superintendent who once questioned why Tschillard felt the need to get ninth graders outside to build an understanding of their science curriculum. Tschillard’s lobbying worked. The superintendent approved a weeklong trip to the Badlands in South Dakota.

“The curiosity was taken away, and how do you get it back?” Tschillard said. “Giving them a chance to ask questions. We want to build an understanding here, to put the kid in the center where they live and give them a sense of place.”

Tschillard has taught science — earth science, earth systems, astronomy and geology — to students from kindergarten through college levels. He taught for eight years in Iowa and for 16 years at University Schools before moving to the Poudre Learning Center. He earned a master’s degree in earth sciences while teaching at University.

When Tschillard sought community interest and partners for the learning center concept many years ago, he reached out to groups such as Rotary clubs, businesses, schools, school districts and prominent community members. The candy was one way to maintain a level of engagement allowing Tschillard to explain his vision on the benefits of the learning center.

“They stayed longer,” he said. “They’re coming to meetings after work. Feeding them was always important. It was a way to keep energy flowing. They were people who didn’t think it would happen, but wanted to help.”

“He has a quality of being able to draw people toward the dream of the Poudre Learning Center,” Rogstad said, adding Tschillard was pivotal in the founding and formation of the center and its supporting infrastructure.

Rogstad has known Tschillard for more than 30 years through their mutual interest in the environment and natural resources. Rogstad was then with the state division of wildlife, now known as Colorado Parks and Wildlife, while Tschillard was teaching at University.

Rogstad has been a volunteer and advisor at the learning center for the last couple years. He said the facility, and the organization, could’ve developed and thrived without Tschillard, but it wouldn’t have progressed as far.

Rogstad called Tschillard “the pied piper” of the Poudre Learning Center because of his friend’s ability to involve different groups and individuals.

“He has a quality of being able to draw people toward the dream of the Poudre Learning Center,” Rogstad said, adding Tschillard was pivotal in the founding and formation of the center and its supporting infrastructure.

In 2015, the nonprofit Poudre Learning Center Foundation was formed to support the center’s mission according to the foundation website. The learning center has also received backing over the years from four Weld County school districts. Greeley-Evans School District 6 is the lead system with affiliation also coming from Weld RE-4 in Windsor, Eaton School District and Weld RE-5J in Johnstown and Milliken.

Tschillard and the PLC staff are District 6 employees.

District 6 owns both of the buildings. The former Hazelton School was relocated and reassembled on the PLC site in the early 2000s with efforts and fundraising from Weld County Rotary clubs. A couple of years ago, the PLC opened a $1.5 million, 7,000-square-foot expansion building — known as the Poudre Learning Center Prairie InSTEM Station (Inspired by Nature, Science, Technology, Engineering and Math) — again with money and work raised and generated from local Rotary clubs.

With Tschillard’s retirement, and the retirement of three other PLC staffers, the Poudre Learning Center is at a crossroads. The original dream is going to evolve. A search is underway for Tschillard’s replacement as director.

“We will miss Ray’s tireless commitment to the Poudre Learning Center,” District 6 Superintendent Deirdre Pilch said in a statement. “He has developed it into an important resource in our community, and we are grateful for his service. He has definitely earned a restful retirement.”

District 6 Board of Education member John Haefeli, the chair of the Poudre Learning Center Foundation Trustees, said the organization has been in the midst of strategic planning since the spring to determine the learning center’s future.

Haefeli said there are currently 14 candidates to replace Tschillard.

“It’s of tantamount importance,” Haefeli said of the search. “If we don’t have the right person in that group of 14, then we’ll re-do the search.”

Rogstad said Tschillard’s retirement and any changes are known as succession in ecology. It’s the concept that nothing stays the same.

“What you hope for, we go and take the change and move forward into a progressive direction,” Rogstad said. “We take Ray’s dream and figure out how to make the seeds germinate and grow.”