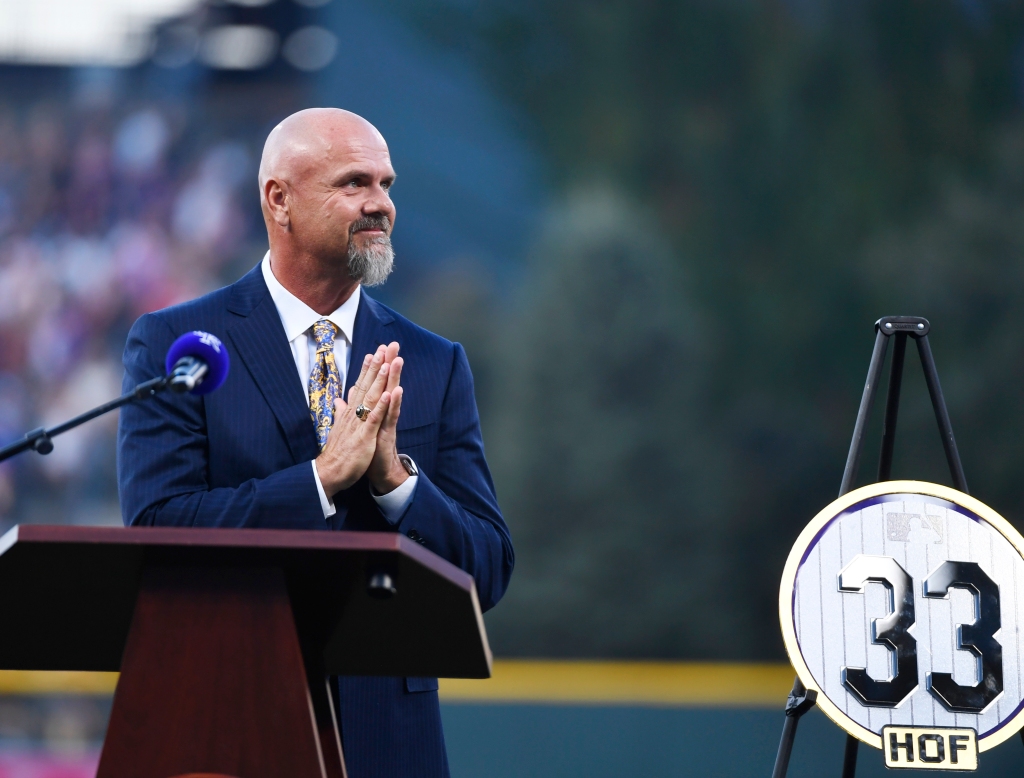 When Larry Walker was traded to St. Louis in 2004, he wondered what legacy he was leaving behind in Colorado.

Saturday at Coors Field, Walker — enshrined Sept. 8 as the team’s first Hall of Famer — didn’t have any more doubts about his place in Rockies lore. Colorado retired his No. 33 in an emotional pregame ceremony featuring a moving speech by the outfielder who played 10 seasons in LoDo.

“When I got traded I knew I was getting up in age (at 37), and I had a relatively larger contract at that time,” Walker said. “I understood the game and the moves they were trying to make, and there’s no hard feelings. But it was tough because this was my home, and I had a home here, I spent some winters here as well. It’s never a great thing to get traded and go to another city, because there’s always those great feelings you don’t want to leave behind and you don’t want to be forgotten.

“With my number being retired, now I know I haven’t been forgotten.”

Walker was elected into the National Baseball Hall of Fame in 2020 in his 10th and final year on the ballot, clearing the required 75% threshold by a mere six votes. But because of the pandemic, he waited 409 days to be officially enshrined in Cooperstown earlier this month. That, in turn, caused the Rockies to push back his number retirement, which was originally scheduled for April 19, 2020.

Former third baseman Vinny Castilla, original GM Bob Gebhard and owner Dick Monfort talked before Walker, who took the field to Ozzy Osbourne’s “Crazy Train” (his walk-up song) and a standing ovation. Just before he spoke, the Rockies played a video tribute and then Walker’s daughters pulled back a large purple sheet and fireworks went off as No. 33 was unveiled on the facade of the second deck in right-center.

The No. 33 display looks like Todd Helton’s No. 17 circle, with purple numbers and a pinstripe background, but Walker’s is encircled by gold and has “HOF” tagged at the bottom.

The 54-year-old spoke for about five minutes to the near-capacity crowd saturated in all arrays of Walker jerseys. Attendance was also buoyed by a Walker bobblehead giveaway. The bobblehead depicts Walker wearing the team’s “Turn Ahead The Clock” uniform and holding his bat up toward the sky after hitting a walk-off homer against the Braves on Aug. 18, 1999, against the Braves.

That homer was Walker’s second of that particular game — he also had an opposite-field shot in the first inning — and became one of the outfielder’s signature moments. But Walker said his favorite memory from his Colorado tenure is winning the wild card in his first season in Denver in 1995.

“You don’t come out here to gloat over personal numbers, you come out there to throw champagne on your teammates,” Walker said. “So nothing beats that playoff season in 1995.”

The Rockies clinched the wild card on the final day of the season at Coors Field, with a thrilling comeback 10-9 victory over the Giants. It made Colorado then the fastest expansion team to clinch a playoff berth (a mark later broken by the Diamondbacks) and Walker was 3-for-4 with a homer and three RBIs in the game.

Walker remembered running around the field with his teammates to celebrate in front of a sold-out crowd. And he fondly recounted later heading to the third level of the stadium, at the clocktower overlook at 20th and Blake, with Dante Bichette to continue the celebration with fans out in the street in front of the main gate.

Though 1995 would end up being Walker’s lone playoff appearance with the club, he ended up getting two postseason appearances (and hit two World Series homers) in his two seasons in St. Louis. But what Walker lacked in team success he made up for with personal accolades.

The 1997 NL MVP is still the only Colorado player to win the award, and he was a three-time National League batting champion. He hit 383 career homers, won seven Gold Gloves and was a five-time all-star. And over a 17-year career in which he slashed .313/.400/.565, Walker joined Barry Bonds as the only two players in MLB history with at least 300 homers, 200 steals and an OPS of at least .950.

But Walker played the role of humble superstar Saturday, and again emphasized why there was no doubt he was going into Cooperstown with a Colorado cap on his plaque.

The Maple Ridge, British Columbia, native who grew up with dreams of being an NHL goalie originally signed with the Expos in 1984 as an undrafted free agent. He spent most of 1985-89 in the minors before debuting in August of that year, and played six seasons in Montreal. With the Expos, he earned his first all-star nod and became a known commodity along the way.

But Denver is where his baseball heart is, Walker explained.

“When I first came here as a visitor, and I saw the beauty of the land here, there was a familiarity with what I grew up with and the mountains,” Walker said. “It’s like looking at Golden Ears Mountain back home with the snow cap and the pine trees and fresh air … It felt like home before I even had a home here.

“(That’s why) I want these Rockies fans to not see my face on the plaque, but to see their face on there. And when they go visit (Cooperstown), I want them to realize that that ‘C.R.’ represents them as much as it represents me… (The region’s passion) is the reason this team exists.”

Walker’s Hall of Fame plaque was on display for fans during Saturday’s game against the Giants, part of a special one-day visit to Denver from Cooperstown. Count Rockies southpaw and Denver native Kyle Freeland as one who enjoyed the experience of seeing Walker honored by the club.

“I was young when he was playing, but I took time to understand who he was, how he played, what he meant to this organization,” Freeland said. “I’d always stop to watch his at-bats. He was one of my favorites… He was able to instill that love for the game into younger kids like me who were watching him play the game his way, playing loose and carefree but also powerful. Look where it got him.”

Colorado native and Grandview alum Gausman looks to keep his all-star season rolling in the series finale. Gausman allowed three runs in seven innings in his lone start against the Rockies this year, and has been particularly vulnerable against Garrett Hampson, who is 4-for-9 with three homers against him. Gausman’s last two starts have been sub-par, as he allowed four runs to the Padres in each outing. Meanwhile, Senzatela is making his career-high 27th start of the season and his first start against San Francisco in 2021. Prior to his last start (four runs in six innings against the Dodgers on Tuesday), Senzatela had tossed seven straight quality starts with a 2.60 ERA in that span.

Trending: Ryan McMahon has a career-high 57 walks this season, with 14 in September entering Saturday’s game. That’s the second-most walks of any month in his career, behind only the 15 in August 2019.

At issue: While the Rockies have been the Dodgers’ little brother the past few seasons, they haven’t fared much better against San Francisco. Entering Saturday, the Rockies are 4-13 against the Giants in 2021, having been outscored 112-56 and out-homered 25-13.