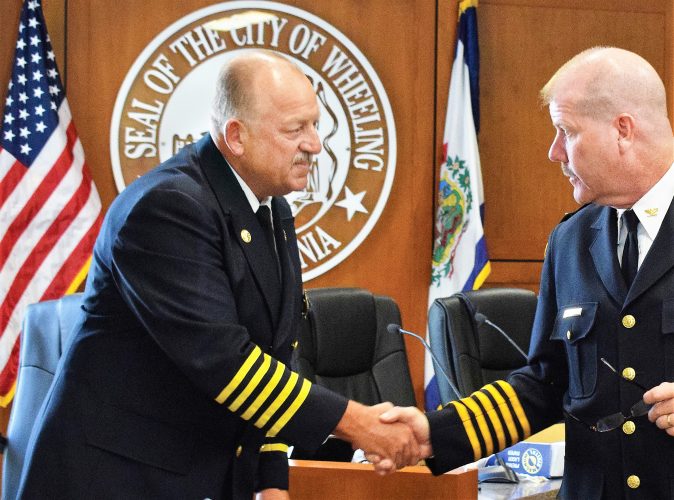 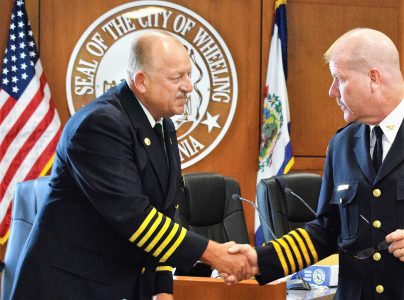 File Photo by Scott McCloskey
Wheeling Fire Chief Larry Helms, left, is greeted by Wheeling Police Chief Shawn Schwertfeger during an awards ceremony in city council chambers in 2017. Helms will retire from the fire department in mid-June after 35 years of service.

WHEELING — After 35 years of service to the Wheeling Fire Department — 14 of them in the department’s highest ranking position — Wheeling Fire Chief Larry Helms is retiring from an occupation he felt compelled to join at a very early age.

“It’s something I’ve always enjoyed doing,” Helms said. “And the old phrase, ‘If you have a job you enjoy, you never have to go to work,’ that’s really true for me in this case with being a firefighter.

“I got into the fire service when I was 12,” he added. “My Scout leader was the fire chief in Neffs, Ohio, and he got us involved there. So I kind of had the bug ever since then. Over the years, I’ve always enjoyed being in the (department’s) companies that were busiest. It just kept you busy and there was something different every day.”

After that early introduction into firefighting, Helms joined the Glencoe Volunteer Fire Department when he was old enough, around age 16. After graduating from Bellaire High School in 1982, he graduated from Ohio Diesel Technical Institute in Cleveland and eventually worked for Mack Truck as a mechanic and service manager while still volunteering at the Glencoe department. He eventually took tests at several fire departments in different cities with a friend from another local department before he was hired at the Wheeling Fire Department in 1986.

Helms has led the City of Wheeling Fire Department since September 2007. He started out as a firefighter “pipeman,” before moving up through the ranks. Within a year of joining the department, he became a paramedic, before being promoted to fire engineer in 1991, lieutenant in 1997 and captain in 2001. In 2006, he was named assistant chief, serving in the Bureau of Fire Prevention. In 2007, City Manager Robert Herron named him the department’s 15th chief of the department, stepping in for the retiring Stephen Johnston.

As many day-to-day challenges as Helms has faced in his career — from fires to floods to other critical incidents — he said the COVID-19 pandemic has been both his and his department’s biggest challenge. The department had implemented some protections for diseases like swine flu and avian flu, but COVID-19 took a dramatic toll on the department.

Helms said staffing certainly turned into one of the department’s biggest challenges. In a year, 36 staffers contracted COVID and at one point, there were 16 isolated. The department, he said, came very close to changing the staffing system at one point late last year.

“There was a point last year — late November, early December — where we were ready to go to a two-platoon system and combine everybody we had left and run two platoons instead of three,” he said.

Every patient during the pandemic had to be treated as if they were potential COVID carriers, Helms said. The department went through thousands of dollars of personal protection equipment to keep both firefighters and patients safe..

Helms said he was quarantined himself for a 10-day period where he stayed isolated and worked from home symptom-free.

“It may have been a false positive. I don’t know,” he said. “The hardest thing was the members that were affected by it, some of them pretty dramatically. But thank God they recovered and are healthy today.”

Helms said he has seen a lot of notable changes in the firefighting field over the years, both locally and nationally. When he started, there was only one radio per truck. Now every firefighter has a radio. Automated external defibrillators weren’t something firefighters carried.

He said the (emergency medical technicians) when he first began as a fireman worked with “pretty basic medicine”, such as bandaging, splinting and CPR. Paramedics of today deal with much more advanced technology.

“The type of PPE that we wear, the materials are lighter, more durable,” he said, “and we have self alert devices on the air packs now.

Fire trucks and equipment are now much more advanced, Helms added. He saw the introduction of thermal imaging devices, which didn’t get to the Wheeling Fire Department until the mid-1990s. Now every truck has thermal imaging equipment.

Helms said he has been able to achieve several goals while serving as the department’s chief — advancing its EMS, getting new PPE, updating computerization, and obtaining new trucks and ambulances. He has also worked toward getting various fire stations upgraded and assisted with plans to build a new headquarters, which is just now beginning to come to fruition as the city moves forward with plans to build at a new location in East Wheeling.

Helms said while he has responded to many emergency events over the years, one that is quite memorable to him was the 2004 flooding that hit the local area. He said the department made dozens of evacuations or rescues during that flood.

Helms’ official retirement is in mid-June. When that comes, Assistant Chief Jim Blazier will assume the chief’s job. Blazier said it has been a pleasure to work alongside Helms for many years. He said he began with the department only three years after Helms and early in their career the two got involved with state firefighting competitions together.

“We competed for quite a few years in those competitions and worked together there as well as here,” Blazier said. “So we’ve worked closely on a lot of projects.”.

Helms said it has been his extreme pleasure to serve the residents of Wheeling and alongside of his co-workers for the past 35 years. He said a tremendous camaraderie exists in the firefighting profession.

“When you say they are family, it’s true,” he said. “We spend more time with each other here than we do with our own families at home.”

Helms said he likes to stay busy, so he has decided to transfer to another occupation with the city as a building code official. He said the job will allow him to stay involved with progress on the city’s new fire headquarters. Helms lives in Wheeling with his wife Peggy. They have two grown daughters, Chelsea and Rachael, and have three grandchildren.