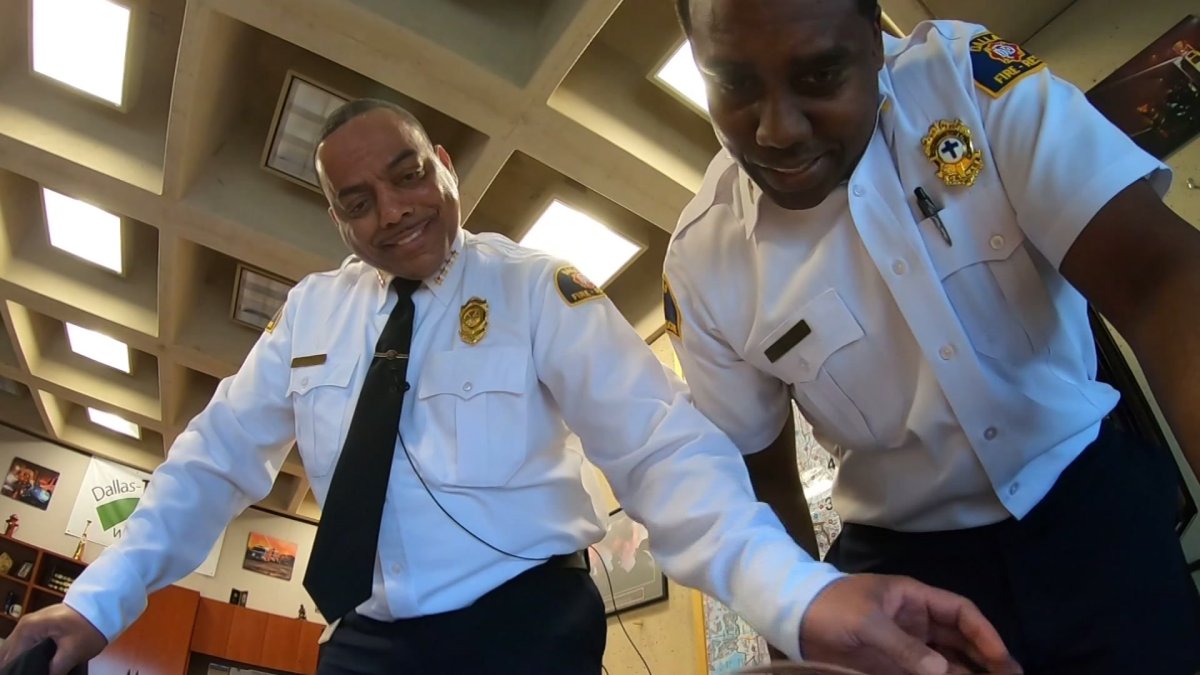 Retiring from the Dallas Fire-Rescue Department is a special accomplishment. It comes with its own Tap Out ceremony. Chaplain Ray Schufford’s retirement comes with some special connections to his chief.

Schufford got his final radio call at his retirement Tap Out ceremony. On duty, it means the fire is out and crews can return to the firehouse.

Now for Schufford, it means he’s completed his duties.

“I’m so thankful that I’ve had the opportunity after 26 years and counting to help out so many people but yet still serve my community and serve the brothers and sisters on the fire department,” Schufford said. “And walk away with good health.”

It’s that servant’s heart that led him into his firefighting career.

“That was the real reason,” Schufford said. “I just saw myself doing something that I could help the community but also have a noble effect on other individuals.”

He did that as a firefighter. But he also took on a heavier role as a chaplain.

“I saw in my own heart I wanted to go a step further and help the brothers and sisters that were dealing with some of the same things that I’ve had to endure in these 26 years being on the Dallas Fire-Rescue Department,” Schufford said.

From hospital visits to crisis management, it’s a tougher job than fighting fires.

“At some point in time if it’s a minute, 5 minutes, or 5 hours later, it’s going to be over,” Schufford said about fighting fires. “But facing a family after they’ve lost a loved one or they’ve endured something where they’ve lost property that’s going to remain and last for a lifetime for them.”

His fire chief said Schufford is a natural in this role.

“He has a real unique ability to kind of hone in on what you need and really pay attention to the key things to make you feel comfortable to enlighten and talk about the things that you are struggling with,” Dallas Fire-Rescue Chief Dominique Artis said.

Artis commended Schufford for his years of work, but their bond goes back even further.

“Probably since I was about 10 years old, his mom used to actually cut my hair,” Artis said.

The two also graduated together from a special rookie class.

“We were one of the first classes to — everybody passed everything,” Artis said. “Schuff stood out among us because he was the one that really tried to keep the peace.”

Peace that he prayed over them even on his special day.

“Guide them on every run because we know a lot of danger is lurking around the corner but keep them protected,” Schufford said in a prayer.

Peace in the words of advice he shared with them.

“We never know in the job and the profession that we do, we don’t ever know if we are going to get a chance to say that,” Schufford said. “So definitely I leave you with tell your loved ones that you love them.”

It’s a peace he carries with him into his next chapter.

“I look forward to whatever God has in store for me,” Schufford said. “So, I’m not retiring. I’m just transitioning to my next ministry.”

He wouldn’t say exactly what is that next ministry. But he did say it would be dealing with the community.