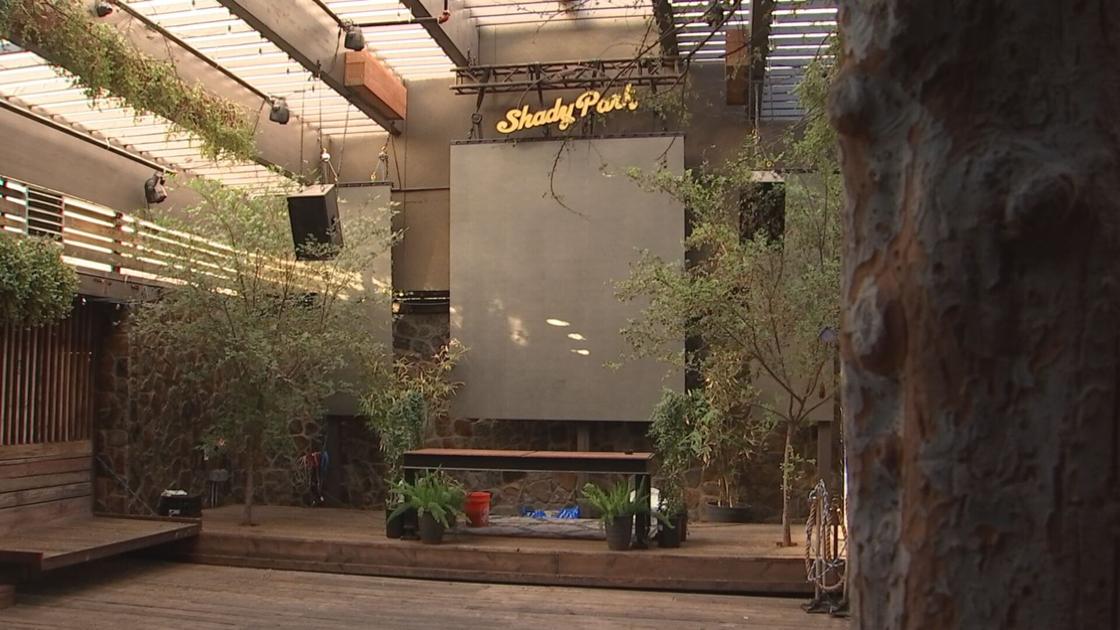 TEMPE, AZ (3TV/CBS 5) — The battle over noise continues in downtown Tempe between concert venue Shady Park and senior living facility Mirabella. Months ago, community members were trying to save Shady Park after they said Mirabella residents launched a campaign to shut down the music venue. Now, they’ve slapped Shady Park with a lawsuit.

For more than six years, electronic music fans have packed into Shady Park to hear their favorite artists – many who got their start in Arizona. “We feel we are a part of this community. We are made up of this community,” said Scott Price, owner of Shady Park.

Tempe’s Shady Park, which is located on University Drive just east of Mill Avenue, residents living in a new luxury high-rise apartment directly across the street launched an aggressive campaign several weeks ago to shut down live music at the venue.

During the height of the pandemic, concerts stopped, and simultaneously, ASU opened up Mirabella, a senior living facility across the street. But once the music started up again months ago, residents there started complaining of loud noise late on weekends. Now, Mirabella has filed a lawsuit against Shady Park for being a public and private nuisance and requested a temporary restraining order to quiet the music.

“We didn’t want this fight. We certainly didn’t choose this fight,” said Price. Price said they’ve done everything possible to accommodate their new neighbors. They got a permit from the city to put a new cover-up outside to help with noise. “We built a canopy above our live music area. It’s 95% enclosed,” Price said.

But Mirabella said that’s not enough. According to the lawsuit, the noise coming from concerts at the music venue violates the City of Tempe’s noise code. The attorneys representing the residents at Mirabella sent Arizona’s Family statements from them that all said they don’t want to shutter Shady Park but want to be able to sleep and enjoy their homes.

On the flip side, Shady Park has a music permit that allows them to operate seven days a week until 2 a.m. if they choose. Most of their concerts are on the weekends. Tempe police said they haven’t issued any noise citations to Shady Park. “It’s unreasonable to open a retirement senior living home directly across from us but also in the heart of the downtown urban core and entertainment area,” said Price.

The legal process for this continues Friday with the first court hearing, where Mirabella will ask for the temporary restraining order to be granted. If a judge were to honor that, Shady Park would have to turn down the audio of their concerts to a level at or below the Tempe noise code.

Full statement from Mirabella at ASU:

“Mirabella at ASU has been working for seven months to seek compromise and find a resolution to Shady Park’s unnecessary and excessive noise. Now, to protect the health and welfare of our residents, it has become necessary to ask the Maricopa County Superior Court for an injunction to prohibit Shady Park from emitting noise that exceeds Tempe’s community standard.

Mirabella residents in apartments facing Shady Park have been unable to sleep due to the late-night weekend noise from the venue’s sound system, which continues to violate the City of Tempe’s noise ordinance.

This legal action comes after months of asking the venue owner to mitigate the excessive sound and numerous good-faith attempts on Mirabella’s part to reach an agreement on a solution that works for both Shady Park and Mirabella. Shady Park’s ownership has not responded to our offers to meet or assist and has shown no willingness to participate in even a basic discussion, leaving us no choice but to ask the Court for relief.

Several weekends of sound recordings and analysis captured by professional sound engineers at Mirabella between 8 p.m. and 2 a.m. have shown that Shady Park’s sound equipment continues to generate excessive and unnecessary noise. Our affected residents are unable to sleep or enjoy their homes as a result.

“We continue to hope to find a solution that works for all parties and remain open to any solution that allows Shady Park to continue operating without disrupting Mirabella residents with excessive noise,” said Tom Dorough, Executive Director, Mirabella at ASU.”

Statement from Mirabella Residents via their attorneys:

Prof. Ed Kavazanjian: “I am a native New Yorker and lived and worked in Manhattan for several years, on a block with a pub on the corner and a fire station down the street, and I never had to deal with this level of disruption to my work and sleep. I am not trying to shut Shady Park down. I am simply asking that they comply with the law.”

Sharon Murry: “I’ve lived at Mirabella for 10 months. I love being on the ASU campus, and also love the ability to avail myself of all the offerings of downtown Tempe. I would also like to be able to sleep on Friday and Saturday nights; we aren’t asking them to close, just to abide by the law.”

Gail Fisher: “My husband and I just want to enjoy our beautiful residence without the nightly weekend incessant noise from Shady Park in violation of the law.”

Barbara Shirley: “I really enjoy the vibrancy of downtown and the ASU campus during the week. And I’m not trying to shutter Shady Park. All I want is that Shady Park comply with the law so I can sleep and enjoy my home and environs on the weekends as well.”

The City of Tempe is aware that some residents of the Mirabella at ASU housing complex have filed an injunction in Maricopa County Superior Court against the owner of Shady Park, a nearby business. The plaintiffs are asking the court to issue a ruling related to live music events held at the business. The city is not named as a party in this action.

Earlier this year, concerns were raised by Mirabella residents about the noise level from Shady Park on weekends. As live music events have resumed during the pandemic, these concerns became more frequent. Tempe has worked with both the residents and Shady Park’s owner throughout this time, and Shady Park received a city permit to build a new structure over its outdoor area in an effort to mitigate noise.

It is the right of any party that feels aggrieved to seek judicial relief and that is what is occurring now through Mirabella residents’ motion to get the sound levels turned down.

The city remains open to hearing the feedback and concerns about quality of life issues from all residents. Our downtown and other areas of Tempe continue to grow and become home to increasing numbers of diverse populations. We promote mutual respect and the healthy balance of everyone’s rights to live, work, recreate and be entertained. We believe this kind of peaceful co-existence can be achieved in the matter that is between Mirabella and Shady Park.