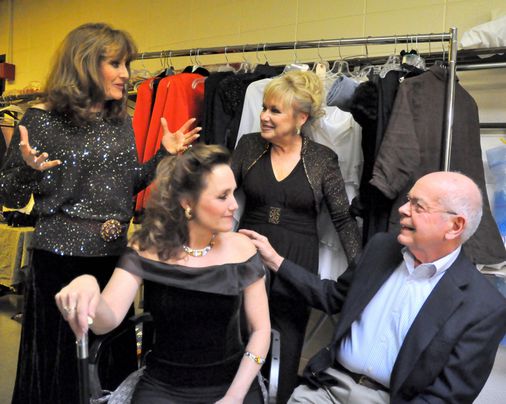 At 86, with Reagle’s summer season a scratch because of the pandemic, it is simply time, he said. His retirement will be effective June 30, and the search for a successor is underway.

Often directing the shows himself, Eagle introduced musical theater to several generations of patrons, some of whom couldn’t afford the pricey ticket prices charged by the big commercial theaters in downtown Boston. He gave countless actors, actresses, singers, dancers, and musicians a career boost or just a fleeting taste of the limelight.

To talk with Bob Eagle is to be steeped in one anecdote after another by a man who loves to talk about theater and its vagaries. On Tuesday, he recalled the time the actor playing the Stage Manager in a production of “Our Town” confessed to him, shortly before opening night: “Mr. Eagle, I know all the lines. I just don’t know the order they’re in.” Recalled Eagle: “I went ‘Oy.’ ”

(“Our Town” was the rare non-musical drama presented at Reagle. During rehearsals, author Thornton Wilder paid a visit to the theater and spoke to the production’s cast, Eagle said.)

And then there was the time an actress in “Gypsy” returned to the Reagle just before curtain, having spent the day on a shopping expedition to Boston, and breezily advised Eagle to tell the audience the start of the show would be delayed. Snapped Eagle: “We’re starting on time. You get out there.”

He was equally decisive during one of the darkest episodes of his theater’s history. In the summer of 2017, on the day before a production of “42nd Street” was supposed to open, starring former “Dukes of Hazzard” star Tom Wopat, the actor was arrested on charges of cocaine possession and indecent assault and battery. The latter charge stemmed from an accusation he had grabbed a fellow cast member’s buttocks during rehearsals, following previous complaints about inappropriate touching and comments.

Eagle fired Wopat immediately from “42nd Street.” (Wopat eventually resolved the case by pleading guilty to two counts of annoying and accosting a person of the opposite sex. He received probation.) A footnote to the episode illustrated how deep the Reagle’s — and Eagle’s — roots went. On the night when he was called out of bed by Waltham police and told of the arrest, it turned out, Eagle said, that “three of the cops had been in a production of ‘Oliver!’ when they were kids.”

After founding the theater in 1969 and staging “Carousel” as the debut production, Eagle has presented three or four shows every summer in the 1,082-seat Robinson Theatre. The titles are invariably well-known, a host of classic musicals like “South Pacific,” “West Side Story,” “Hello, Dolly!,” “Kiss Me, Kate,” and “Guys and Dolls.” It’s a point of pride with Eagle that from the very start Reagle productions employed full orchestras — “We haven’t cut a bar of dance music, that I know of” — and he often paid for the rights to use a show’s original choreography. Reagle casts were usually about 90 percent amateurs and 10 percent professionals.

“What made the difference was having some Broadway professionals in casts, because actors who would normally be only interested in the lead would want to be in the ensemble for Shirley Jones doing ‘Carousel’ or Sarah Pfisterer doing ‘My Fair Lady,’ ” he said. The Reagle also showcased some of the Boston area’s most skilled musical performers, such as Jennifer Ellis, Leigh Barrett, and Aimee Doherty.

When asked the inevitable question — which show was your favorite? — Eagle replied: “I loved ‘Carousel.’ And I loved ‘Brigadoon,’ because of the gorgeous choral music.”

Then he paused, and added: “But, you know? I’ve loved them all.”