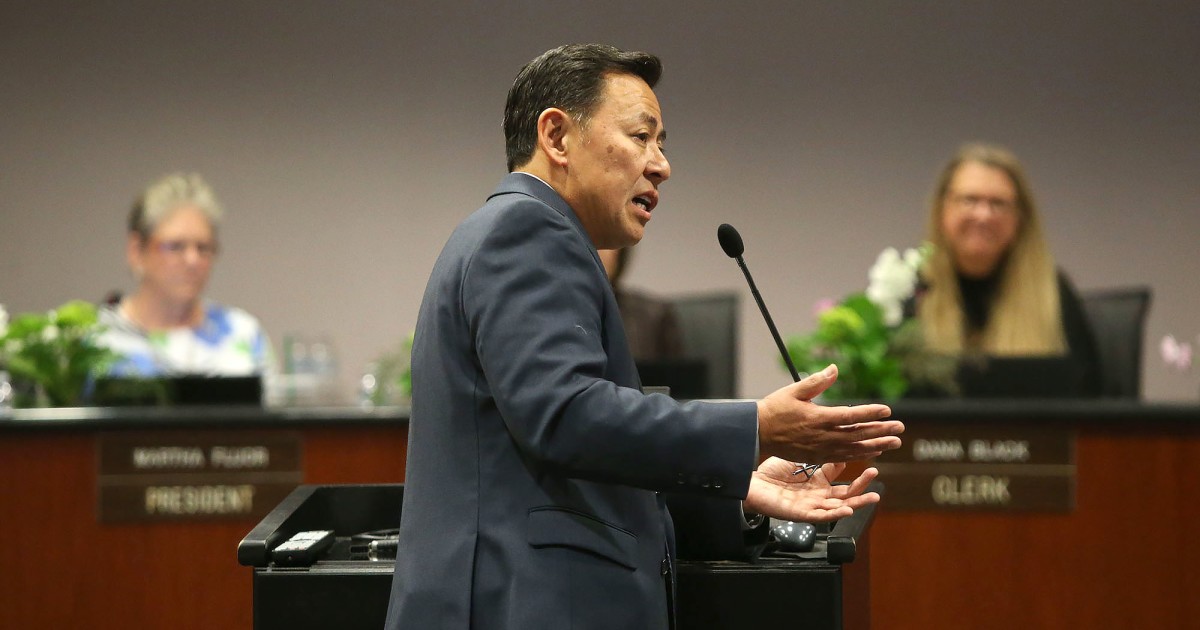 Newport Mesa Unified School District Supt. Russell Lee-Sung — who took over leadership of the district in the middle of a pandemic amid much controversy — announced Wednesday he would retire this summer, after 36 years in public education.

In a letter to the school community, Lee-Sung, 57, explained his more than six years with the district would come to a close effective Aug. 3.

“I have been extremely honored and grateful to serve the Newport-Mesa Unified School District and our school community,” he wrote, recalling a period of leadership marked by a nationwide pandemic that forced the closure of schools and moved thousands of NMUSD students to online learning.

“While these challenges have been extremely difficult for us all, it is through these shared experiences that I will always have a deep connection to the Newport-Mesa community, knowing we got through this together,” Lee-Sung continued.

The announcement comes less than halfway into a two-year superintendent’s contract approved in August, following a 6-1 vote by school board members, that offered Lee-Sung an annual base salary of $298,000 plus benefits.

In July 2020, officials named Lee-Sung acting superintendent following the retirement of then-Supt. Dr. Fred Navarro. Board members said at the time the selection would provide stability, but some members of the public — who requested NMUSD conduct a full search for Navarro’s replacement — were skeptical.

In the months that followed, Lee-Sung steered the district through a distance learning plan that would serve more than 21,000 students and the creation of a 100% virtual Cloud Campus. He would frequently urge understanding and patience as parents, teachers and students repeatedly rallied over school reopening plans (in favor and against) and secondary school schedules.

“I am grateful for his leadership and all he has accomplished in support of students and staff,” she said. “On behalf of the entire Board of Education, we wish him all the best in his retirement.”

In Wednesday’s letter Lee-Sung said while he wasn’t going anywhere just yet, he planned in his retirement to spend more time with family and friends and pursue interests that had always “taken a backseat” to his professional obligations.

“There is no doubt [NMUSD] will continue to thrive, knowing there are dedicated leaders, staff and trustees who will carry on the mission and keep the district moving forward on behalf of our students,” he wrote, thanking the community for its support.

Support our coverage by becoming a digital subscriber.