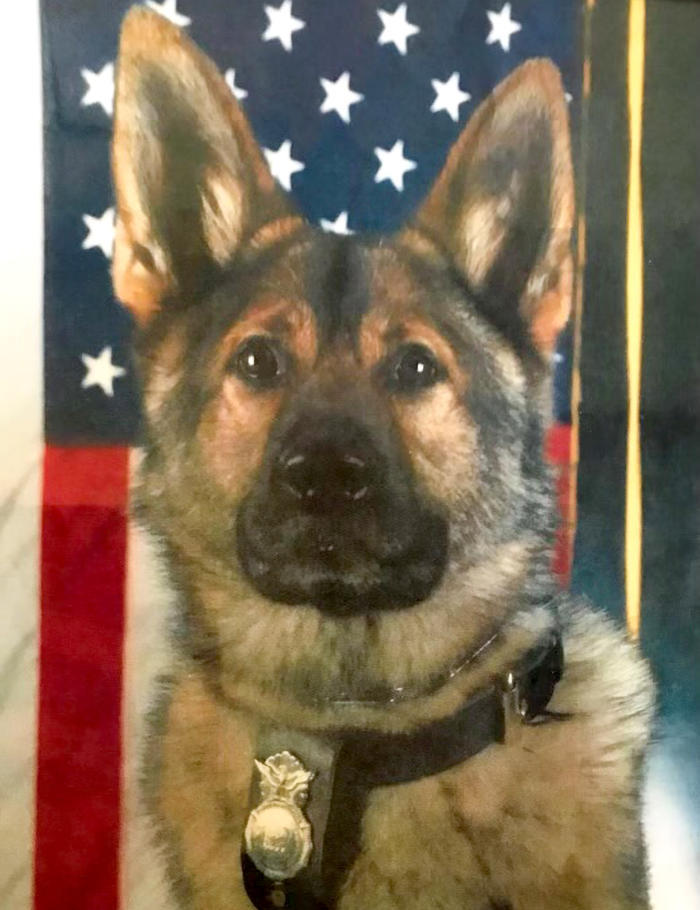 Hugo was a war dog, an Air Force working canine who served tours in Iraq and Afghanistan, and assisted in several Secret Service missions. 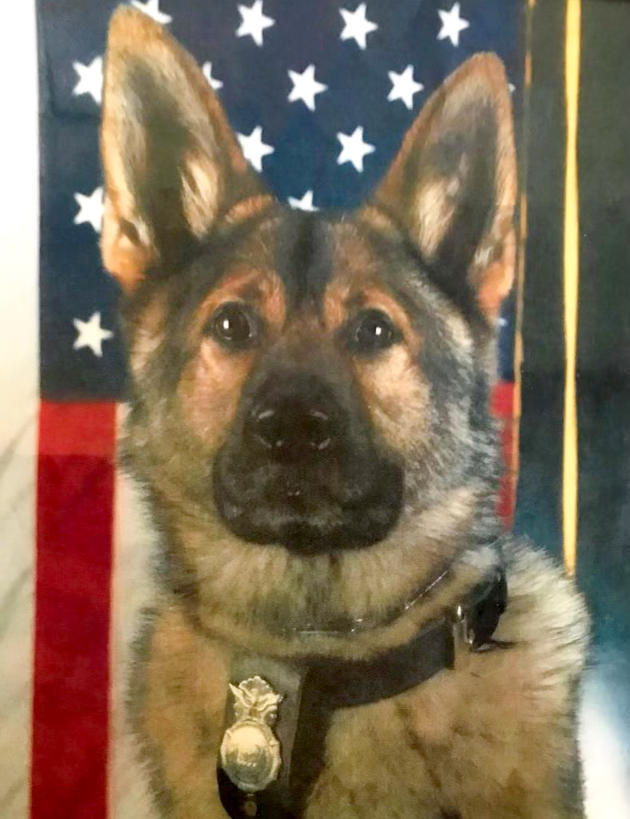 Hugo, an Air Force working dog who served in Iraq and Afghanistan, will be honored in a memorial service Saturday. (Courtesy of Gracey Fajardo)

The 80-pound German shepherd was a specialist in bomb detection. Most of his life was defined by four words of command – “stay, sit, down, heel.”

But in retirement the past few years, the big pooch with the intense gaze learned a new word – “cookie.”

“He knew that meant a treat,” said Gracey Fajardo, who with her husband Frank cared for Hugo in his final years. “He was always ready for a treat, and he never needed an excuse for a nap.” 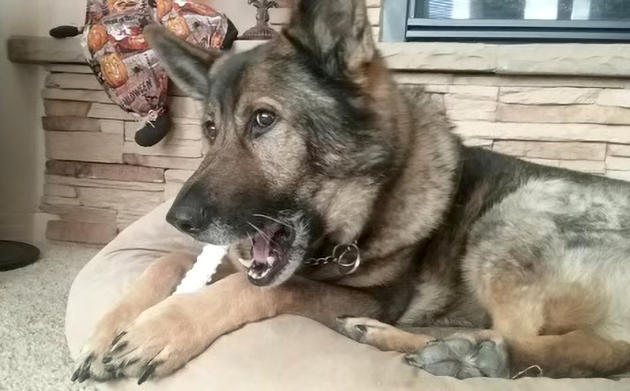 Hugo’s retirement years contrasted sharply with the Spartan years of his military service. Here he enjoys a chew toy on his bed. (Courtesy of Gracey Fajardo)

Hugo died Sunday, three days before his 14th birthday. The Fajardos intend to honor him as war veterans should be.

“Hugo served his country,” Gracey said. “I felt he was just as deserving as any military veteran. Military working dogs retire without any benefits. They get adopted if they are lucky. At the very least, they should be given respect and dignity with military honors when they pass away.”

Records show that Hugo was born on Aug. 4, 2007, and was recruited, for a price, by the Air Force from an Indiana kennel on March 29, 2010. He was assigned to F.E. Warren Air Force Base near Cheyenne, Wyoming, and served as a patrol and bomb-detection dog until hip dysplasia and arthritis caused his retirement in April 2016.

Hugo was adopted by the Fajardos’ son, Air Force Staff Sgt. Zachary Lopez. Lopez is a dog handler with Air Force Security Forces, but he and Hugo had never worked together.

When Lopez was deployed about five years ago, Gracey and Frank took Hugo into their home in the Mariposa community northwest of Albuquerque.

“We had no clue how to care for a retired military working dog,” Gracey said.

She said the nonprofit United States War Dogs Association Inc. helped by providing Hugo’s medication and prescription foods. Gracey, Frank and Hugo worked the rest of it out themselves.

“It did not take us long to fall in love with him,” Gracey said. “He had a very sweet personality. He was not a barking dog. He was quiet as a mouse.”

Adjusting to civilian life took a little time for Hugo.

“Everything was unfamiliar to him because his home on base was in a kennel,” Gracey said. “He had never heard a doorbell. But once he knew what it was, he was always the first one to the door. He had never heard a piano. One thing I loved about Hugo is that I don’t play the piano very well, but he never complained.”

“Hugo would go for walks at 6:30 in the morning, a short walk at 10 in the morning, a lunch walk at 12:30 and an evening walk between 6 and 7,” Gracey said. “But he was slowing down and getting to the point where he was having a hard time getting up, walking really slowly. He was hungry in the evening, but his morning appetite was starting to diminish.”

And then Sunday, Hugo died.

“The saddest thing was Monday morning when Frank got up to do his walk without Hugo,” Gracey said.

Hugo was cremated. The Fajardos will keep the ashes for their son, who is stationed at Andersen Air Force Base in Guam.

But Hugo’s memory and his service to his country will be honored at Sunset Memorial Park on Saturday.

Friends and neighbors will join the Fajardos in the service, which will include a prayer, a Scripture reading, a eulogy, music, a video and the reading of the poem “Guardians of the Night,” which pays tribute to working dogs like Hugo.

Remember me with kind thoughts and tales,

For a time we were unbeatable,

Nothing passed among us undetected.