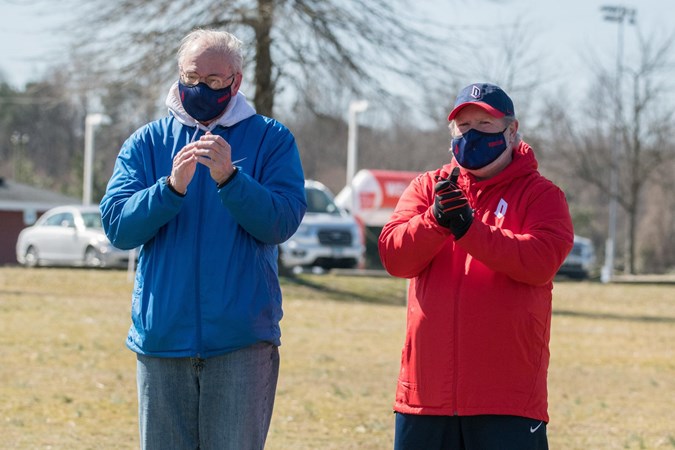 Despite retiring from the full-time role, Lear will remain on the coaching staff as an assistant coach working with Duquesne’s distance runners.

“We are excited to have Jeff transition into the head coaching position,” said Harper. “In addition to a seamless leadership change, Jeff and our student-athletes will benefit from Jim serving as a part-time coach during his full-time retirement.

Jim has been a tremendous asset to Duquesne for nearly a quarter of a century and he has been and will continue to be a mentor for Jeff who has benefitted greatly from their relationship.”

“I am grateful for my time here at Duquesne since 1994 and especially my years as head coach from 2015 to now,” said Lear. “I am looking forward to just being the distance coach starting on July 1st. Lastly, I know that Coach Gibson will do a great job as he assumes the leadership of the DU cross country and track and field program.”

Lear and Gibson led the Dukes’ women’s cross country team to its second Atlantic 10 title this past spring. Lear earned A-10 Women’s Cross Country Coach of the Year laurels after leading the Dukes to the league crown and also helped Duquesne to a program-best No. 5 ranking in the USTFCCCA Mid-Atlantic Regional Rankings.


Gibson joined the Duquesne cross country and track & field staff in December 2015 as a volunteer coach and was promoted to assistant coach in August 2019.

“I’d like to thank Dave Harper for giving me this opportunity to be the Head Coach of the Track & Field / Cross Country program here at Duquesne,” said Gibson. “I also would like to thank Michael Scerbo and Paul Hightower for their support and trust.

Working with Coach Lear over the past five and a half years has been a tremendous honor,” continued Gibson. “He has led this program to great success and with the athletes that we currently have on this roster as well as what we have coming in this fall, I am excited to keep building on what he has accomplished.  I also wouldn’t be here without the support of my wife Diane and my family.”

Gibson has worked with the long sprints, hurdles, middle distance and relays with the track & field program along with coaching the cross country team.

In addition to the women’s cross country team capturing its second A-10 crown last season, Gibson tutored Matt Busche, who won the A-10 800-meter championship and shattered the school record which stood for 12 seasons. Collin Ebling collected bronze in the event, also breaking that school-record mark.

All told, six of Gibson’s athletes advanced to the finals of their respective events at the 2021 A-10 Track & Field Championship. At the ECAC Championship, the women’s 4×400 relay earned a silver medal in the event, while the women’s 4×800 placed fifth and freshman Hannah Seitzinger also finished fifth in the 400-meter run. There were seven new top-five times etched into the Duquesne outdoor track & field record book this spring altogether.

Gibson joined the Duquesne staff after four and a half years at Robert Morris where he served as interim cross country head coach in 2015 as well as coaching the distance events.

While at RMU, he helped the men’s cross country team to a NEC runner-up finish in 2013.

Prior to his stint at Robert Morris, he served as a long-time assistant cross country and track & field coach at Canon McMillan High School.