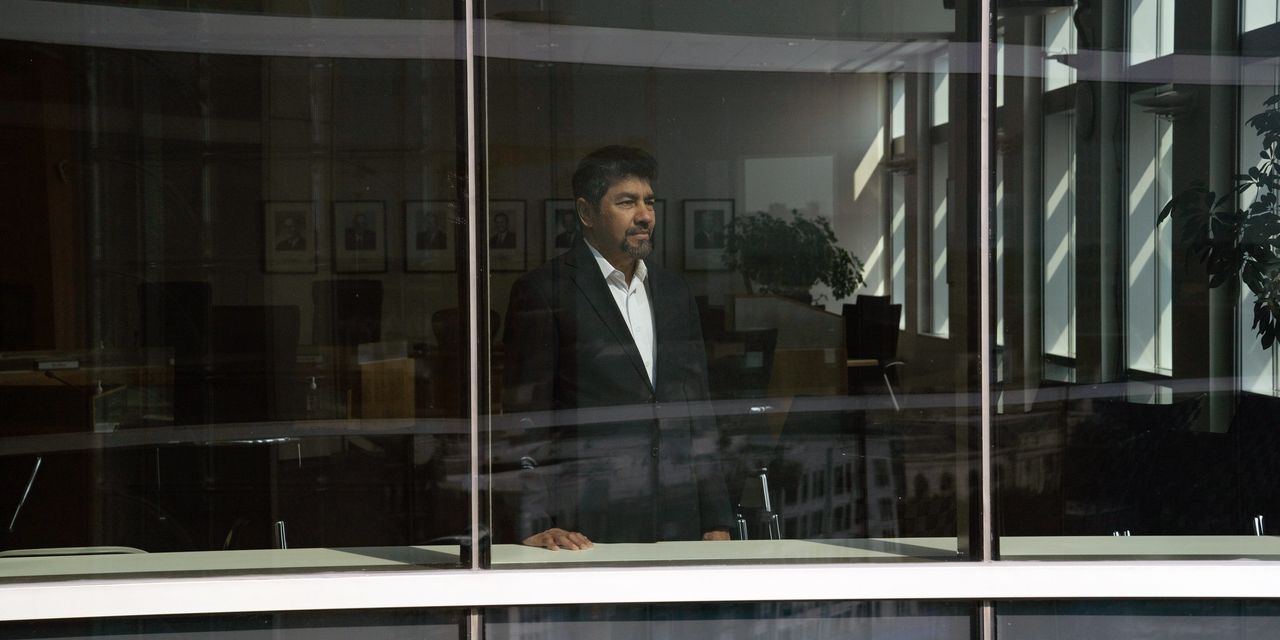 The graying of the American worker is a math problem for Farouki Majeed. It is his job to invest his way out.

Mr. Majeed is the investment chief for an $18 billion Ohio school pension that provides retirement benefits to more than 80,000 retired librarians, bus drivers, cafeteria workers and other former employees. The problem is that this fund pays out more in pension checks every year than its current workers and employers contribute. That gap helps explain why it is billions short of what it needs to cover its future retirement promises.

“The bucket is leaking,” he said.

The solution for Mr. Majeed—as well as other pension managers across the country—is to take on more investment risk. His fund and many other retirement systems are loading up on illiquid assets such as private equity, private loans to companies and real estate.

So-called “alternative” investments now comprise 24% of public pension fund portfolios, according to the most recent data from the Boston College Center for Retirement Research. That is up from 8% in 2001. During that time, the amount invested in more traditional stocks and bonds dropped to 71% from 89%. At Mr. Majeed’s fund, alternatives were 32% of his portfolio at the end of July, compared with 13% in fiscal 2001.

This strategy is paying off in Ohio and across the U.S. The median investment return for all public pension systems tracked by the Wilshire Trust Universe Comparison Service surged to nearly 27% for the one-year period ending in June. That was the best result since 1986. Mr. Majeed’s retirement system posted the same 27% return, which was its strongest-ever performance based on records dating back to 1994. His private-equity assets jumped nearly 46%.

These types of blockbuster gains aren’t expected to last for long, however. Analysts expect public pension-fund returns to dip over the next decade, which will make it harder to deal with the core problem facing all funds: They don’t have enough cash to cover the promises they made to retirees. That gap narrowed in recent years but is still $740 billion for state retirement systems, according to a fiscal 2021 estimate from Pew Charitable Trusts.

Digging out of a deep hole

This public-pension predicament is the result of decades of underfunding, benefit overpromises, unrealistic demands from public-employee unions, government austerity measures and three recessions that left many retirement systems with deep funding holes. Not even the 11-year bull market that ended with the pandemic or a quick U.S. recovery in 2021 was enough to help pensions dig out of their funding deficits completely.

Demographics didn’t help, either. Extended lifespans caused costs to soar. Rich early-retirement arrangements and a wave of retirees world-wide also left fewer active workers to contribute, widening the difference between the amount owed to retirees and assets on hand.

Low interest rates made the pension-funding problem even more difficult to solve because they changed long-held assumptions about where a public system could place its money. Pension funds pay benefits to retirees through a combination of investment gains and contributions from employers and workers. To ensure enough is saved, plans adopt long-term annual return assumptions to project how much of their costs will be paid from earnings. Those assumptions are currently around 7% for most funds.

There was a time when it was possible to hit that target—or higher—just by buying and holding investment-grade bonds. Not anymore. The ultra low interest rates imposed by central banks to stimulate growth following the 2008-09 financial crisis made that nearly impossible, and losing even a few percentage points of bond yield hindered the goal of posting steady returns.

Pension officials and government leaders were left with a vexing decision. They could close their funding gaps by reducing benefits for existing workers, cutting back public services and raising taxes to pay for the bulging obligations. Or, since those are all difficult political choices and courts tend to block any efforts to cut benefits, they could take more investment risk. Many are choosing that option, adding dollops of real estate and private-equity investments to the once-standard bet of bonds and stocks.

This shift could pay off, as it did in 2021. Gains from private-equity investments were a big driver of historic returns for many public systems in the 2021 fiscal year. The performance helped improve the aggregate funded ratio for state pension plans, or the level of assets relative to the amount needed to meet projected liabilities, to 85.5% for the year through June, Wilshire said. That was an increase of 15.4 percentage points.

To what extent should public pensions rely on alternative investments? Join the conversation below.

These bets, however, carry potential pitfalls if the market should fall. Illiquid assets such as private equity typically lock up money for years or decades and are much more difficult to sell during downturns, heightening the risk of a cash emergency. Alternative assets have tripped up cities, counties and states in the past; Orange County famously filed for bankruptcy in 1994 after losses of more than $1.7 billion on risky derivatives that went sour.

The heightened focus on alternative bets could also result in heftier management fees. Funds pay about two-and-one-half percentage points in fees on alternative assets, nearly five times what they pay to invest in public markets, according to research from retired investment consultant Richard Ennis.

Some funds, as a result, are avoiding alternative assets altogether. One of the nation’s best-performing funds, the Tampa Firefighters and Police Officers Pension Fund, limits its investments to publicly traded stocks and bonds. It earned 32% in the year ending June 30.

‘It’s going to be very tough’

It took some convincing for Mr. Majeed, who is 68 years old, to alter the investment mix of the School Employees Retirement System of Ohio after he became its chief investment officer. When he arrived in 2012, there was a plan under way to invest 15% of the fund’s money in another type of alternative asset: hedge funds. He said he thought such funds produced lackluster returns and were too expensive.

Changing that strategy would require a feat of public pension diplomacy: Convincing board members to roll back their hedge-fund plan and then sell them on new investments in infrastructure projects such as airports, pipelines and roads—all under the unforgiving spotlight of public meetings.

It wasn’t Mr. Majeed’s first experience with politicians and fractious boards. He grew up in Sri Lanka as the son of a prominent Sri Lanka Parliament member, and his initial investment job there was for the National Development Bank of Sri Lanka. He had to evaluate the feasibility of factories and tourism projects.

He came to the U.S. in 1987 with his wife, got an M.B.A. from Rutgers University and quickly migrated to the world of public pensions with jobs in Minneapolis, Ohio, California and Abu Dhabi. In Orange County, Calif., Mr. Majeed helped convince the board of the Orange County Employees Retirement System to reduce its reliance on bonds and put more money into equities—a challenge heightened by the county’s 1994 bankruptcy, which happened before he arrived.

His 2012 move to Ohio wasn’t Mr. Majeed’s first exposure to that state’s pension politics, either; he previously was the deputy director of investments for another of the state’s retirement systems in the early 2000s. This time around, however, he was in charge. He said he spent several months presenting the board with data on how existing hedge-fund investments had lagged behind expectations and then tallied up how much the fund paid in fees for these bets.

“It was not a pretty picture at that point,” he said, “and these documents are public.”

Trustees listened. They reduced the hedge-fund target to 10% and moved 5% into the real-estate portfolio where it could be invested in infrastructure, as Mr. Majeed wanted. What cemented the board’s trust is that portfolio then earned annualized returns of 12.4% over the next five years—more than double the return of hedge funds over that period. The board in February 2020 signed off on another request from Mr. Majeed to put 5% of assets in a new type of alternative investment: private loans made to companies.

The private-loan bet paid off spectacularly the following month when desperate companies turned to private lenders amid market chaos sparked by the Covid-19 pandemic. Mr. Majeed said he added loans to an airline company, an aircraft engine manufacturer and an early-childhood education company impacted by the widespread shutdowns.

For the year ended June 30, the newly minted loan portfolio returned nearly 18%, with more than 7% of that coming in cash the fund could use to pay benefits. The system’s total annualized return over 10 years rose to 9.15%, well above its 7% target.

Those gains closed the yawning gap between assets on hand and promises made to retirees, but not completely. Mr. Majeed estimates the fund has 74% of what it needs to meet future pension obligations, up from 63% when he arrived.

Mr. Majeed is now eligible to draw a pension himself, but he said he finds his job too absorbing to consider retirement just yet. What he knows is that the pressures forcing a cutthroat search for higher returns will make his job—and that of whoever comes next—exponentially harder.

“I think it’s going to be very tough.”

Write to Heather Gillers at heather.gillers@wsj.com