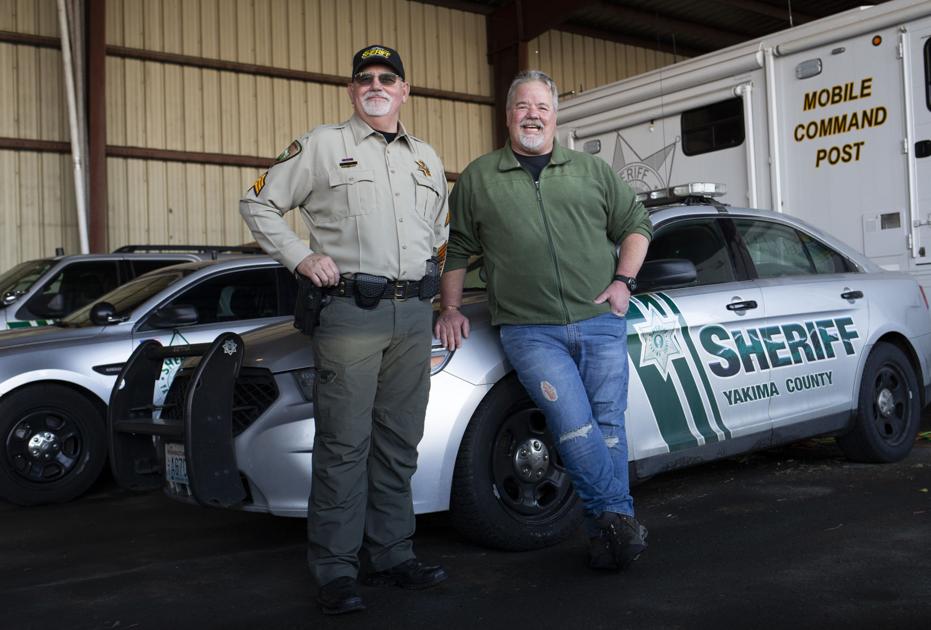 “We’ll miss them both,” Sheriff Bob Udell said. “They had pretty deep roots in the agency.”

But Towell is confident that the department is in good hands, particularly a detective division that has seen more than its share of homicide cases in recent years.

“The detectives in the past three years put together a lot of good cases, not because I was leading,” Towell said. “We closed a lot of cases.”

Udell said the sergeants were “examples of what you want police officers to be,” and their departure represents a loss of institutional memory for the department.

Towell worked at the jail for more than four years and Briscoe three before transferring to patrol, where they worked together.

One of the first things Towell and Briscoe learned as patrol deputies was that high-speed chases weren’t as exciting and glamorous as they previously thought.

“We got in our first chase, and we said, ‘This sucks,’” Towell said.

Both men followed similar career paths in the YSO, sometimes working together, or one following the other into different areas such as off-road deputy, a job that involved patrolling the areas up in the mountain passes, as well as heading the search-and-rescue unit.

“We did a (missing person) case on Mount Adams that took six days, and we found him alive,” Towell said, referring to the 2008 rescue of Derek Mamoyac. “We didn’t think we were going to find him alive.”

Mamoyac survived the cold temperatures by moving at night and sleeping only during the day when it was warmer, according to news reports. Rescuers found him after spotting a toothbrush and granola bar wrappers along a trail.

Briscoe became the team’s coordinator five years ago, working with volunteers to rescue people stuck on Mount Adams or in the more remote reaches of the county.

One innovation Briscoe and then-Sheriff Brian Winter pushed for was creating a landing pad at the sheriff’s South First Street headquarters for helicopters. Winter and Briscoe worked with the U.S. Army to arrange for Blackhawk helicopters assisting rescue missions to pick up search teams — or at least drop bags with supplies to allow a stranded hiker to survive the night — at the sheriff’s office and make the 60-mile trip to the mountain in about 20 minutes.

Normally, it takes a couple of hours for teams to drive out to the mountain’s trailheads.

Briscoe said the work was rewarding.

“I would say (search and rescue) was one of the highlights of my career,” Briscoe said. “It gave me an opportunity to work with more than 100 volunteers. The work was a little more satisfying in that you got to see the results of your labor.”

Briscoe and Towell also served as sergeants on the Pacific Northwest Violent Offenders’ Task Force at different times. Briscoe, Towell noted, was one of the organizers of the multi-agency team that seeks out suspects in violent crimes and fugitives.

Towell also served as a detective, serving as detective sergeant, part of a bureau of six detectives responsible for cases throughout the unincorporated parts of the county and the communities that contract with the sheriff’s office for service.

The detectives also help out agencies that do not have the resources for a full detective squad.

“We always had a high success rate,” Towell said. And technology through the years has helped, from being able to get cellphone data from phone companies to find if a suspect was near a crime scene to DNA evidence that has helped identify suspects.

Last year, YSO investigated 12 homicides, which he said was a record for the squad. Of those cases, detectives made arrests in five cases.

One of the more notable cases Towell handled was the killing of 32-year-old Deborah Bailey, a former Miss Teen Washington who was found shot to death in her Volkswagen Cabriolet off the Naches-Wenas Grade in 1997. Towell worked the case on and off during the 17 years it was open, but he never gave up on finding Bailey’s killer.

“(Towell) and I talked about this case multiple times,” sheriff’s Sgt. Mike Russell said in a 2015 interview. “He believed this case was very solvable when we have a prosecutor who is willing to look at it.”

“The case, in my opinion, had been solved mostly in the first few years,” Towell said. “The issue was finding the evidence to follow through.”

While Bailey’s husband, Barry Beckford, was identified as a suspect, the case languished.

“It was about as cold as they get,” Udell said of the investigation. “Judd kept after it.”

The case got a boost when it was featured on the television show “Cold Justice” in 2014, bringing a fresh perspective to the case, detectives said.

In 2015, Beckford was arrested on a murder charge, with Towell traveling to Idaho to arrest him. While jurors found Beckford guilty of two counts of witness tampering, they deadlocked in an 8-4 vote to convict him, prompting a mistrial.

Beckford, in a deal with prosecutors, entered an Alford plea to second-degree manslaughter and was sentenced to time served. Beckford’s plea allows him to assert his innocence while acknowledging that prosecutors had enough evidence to convict him.

Towell was also one of several detectives pinned down during a 2014 standoff with a man in the 400 block of Rushmore Road near Selah. Deputies and an FBI agent went to the rural property for evidence in the theft of an iPhone and credit cards from a car in West Valley and a stolen vehicle.

Jesse Humphrey, 30, who was living in a motor home on the property, opened fire on the officers, forcing them down behind vehicles and other places where they could find cover for two hours in freezing temperatures before Yakima SWAT officers launched a rescue mission with an armored vehicle.

As the SWAT team approached, Humphrey came out of the motor home and was shot by the SWAT officers and Towell.

For their actions, Towell and others involved in the incident received the sheriff’s Medal of Valor.