The Recorder – With owner’s retirement, Riverside Radiator in Gill closes up shop 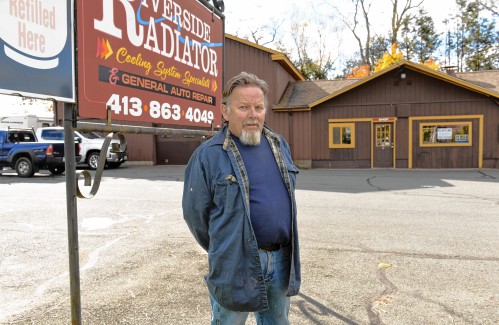 GILL — After 42 years working with radiators, Riverside Radiator owner Dennis “Chu-Wee” Underwood has decided to close the hood on the shop and his career.

Underwood, 66, closed the auto repair shop on Oct. 21, citing his reason for doing so as worsening arthritis in his neck and back. He said a lack of interest from employees, as well as short staffing, made it so that he couldn’t pass down the business.

Underwood began repairing radiators in 1979 across the river in Turners Falls at Escott’s Service Station before buying Riverside Radiator in 1986. His decision to do so embraced his confidence in the trade as a long-term career option.

“It was a chance to go on my own and that’s what I wanted to do,” he said.

He said while his retirement crept up on him to some extent, “it was time.”

“I enjoy building radiators, old car radiators, and antiques,” he said, “but there comes a point where you can’t do it anymore.”

Underwood will be closing the sale of his 48 French King Highway location with an undisclosed transportation company on Nov. 18. Since closing up shop two weeks ago, he has been occupied clearing out decades of fond memories.

“I’ve just been cleaning up and removing 35 years of collectibles,” Underwood said.

Entering his retirement, Underwood looks forward to spending more time with his family in both Boston and Utah. He also reassured community members that he will continue his work hosting the “Riverside Cruise-In,” a car show that runs monthly during the summer at the Schuetzen Verein.

Although his role in the community is changing, Underwood remains grateful for the connections he’s made during his career.

“I’d just like to thank all of the customers over the 35 years,” he said.