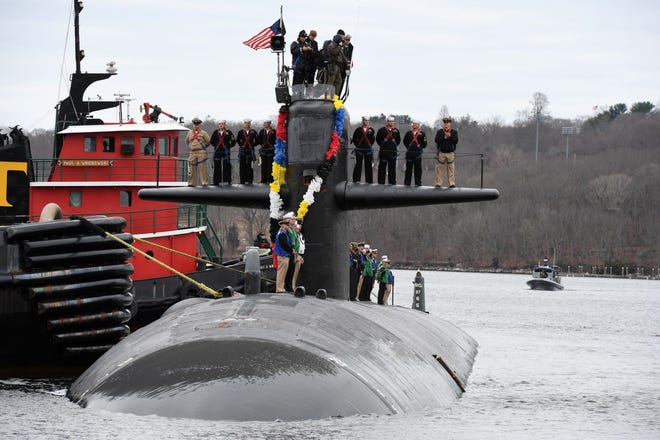 When the USS Providence tied up to the pier at the Navy submarine base in Groton, Connecticut, on April 1, it was more than the usual homecoming for the Los Angeles-class fast-attack submarine.

It was the Providence’s last.

Built by General Dynamics Electric Boat and launched in 1984, the Providence is now headed toward decommissioning and “recycling,” as the Navy calls cutting a retired warship up for scrap metal.

According to the Navy’s 30-year shipbuilding plan, the Providence is scheduled to be recycled in the 2022 budget year.

The Providence is the oldest fast-attack submarine, commissioned into the Navy on July 27, 1985. Fast-attack subs perform several types of missions, including anti-submarine and anti-surface-ship warfare, as well as launching Tomahawk cruise missiles at land targets, delivering special operations forces and conducting surveillance. The Providence was the first Los Angeles-class submarine with vertical launch tubes for deploying Tomahawk missiles.

It is 362 feet long and 33 feet wide, with a crew of 134, including officers and enlisted sailors.

It is the fifth U.S. warship named for Rhode Island’s capital. And, just like the city, which is known for its restaurant scene, the Providence stood out for its chow, winning the Navy’s Ney Award for best food service in the fleet. It took the top prize in 2009 and 2010, as well as being a runner-up or honorable mention afterward.

During its final deployment, it was underway for 212 days, with 97% of the first five months being spent at sea in the western Pacific Ocean.

“We steamed over 50 thousand miles, which is equivalent to twice around the world,” its commanding officer, Cmdr. Michael McLaine, said in a news release upon its homecoming.

During its career, the Providence achieved several navigational milestones, including circumnavigating the globe, transiting the Suez and Panama canals and transiting under the arctic ice cap.

In July 2008, the Providence surfaced at the North Pole, commemorating the 50th anniversary of the first nuclear-powered sub, the Nautilus, becoming the first vessel to reach a position of 90 degrees north latitude, in August 1958.

The Providence is mentioned in the 1986 Tom Clancy novel “Red Storm Rising.”