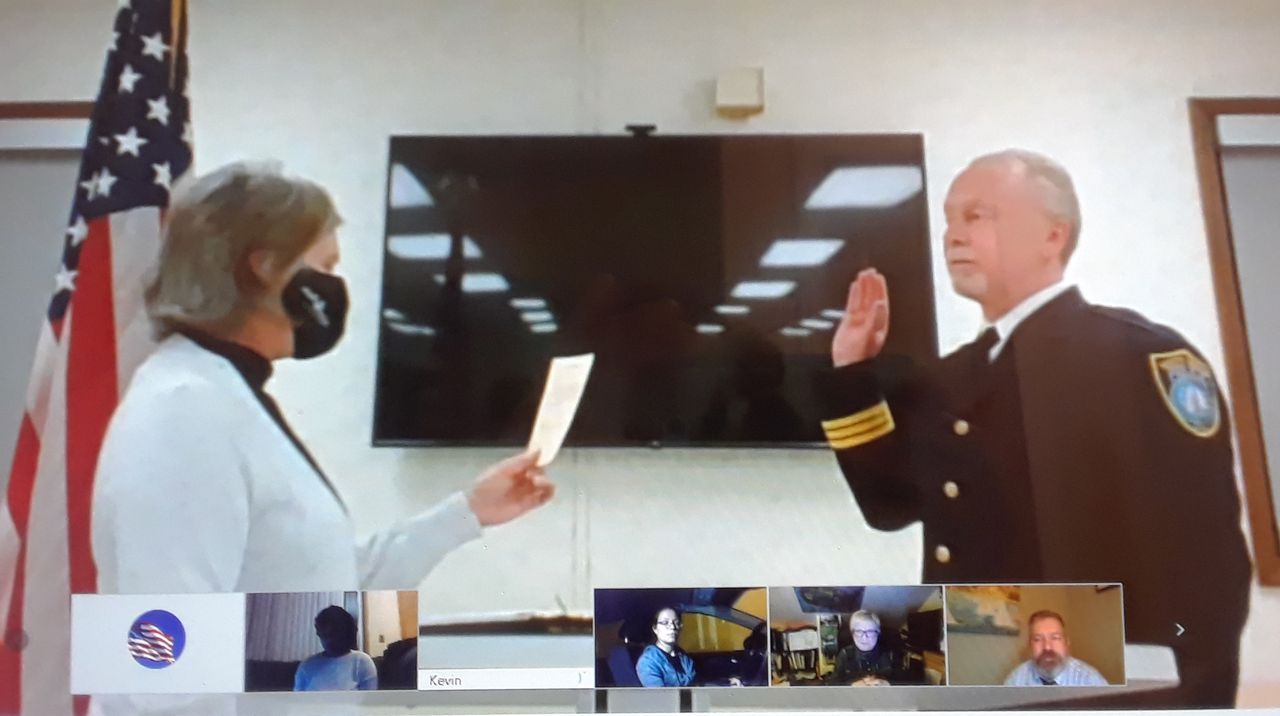 An emotional Welo read from a resolution and then spoke about Nietert’s 35 years of service with the SEPD, the past 14 as chief, and swore in Mays, who has been serving as assistant police chief since 2017. Welo and Nietert have been working on a plan of succession for the past couple of years.

Welo stated that, when each new director or officer begins work for the city, she speaks with them about getting over the initial, uncomfortable feeling that comes with becoming a leader, and about what legacy that leader wants to leave.

Welo said Nietert used the tools he had, and the men and women of the SEPD, to start the city’s Citizens Police Academy and Youth Police Academy and Coffee with the Chiefs events. “I remember him bringing officers into this (South Euclid) Community Center (from where Welo and Nietert were speaking during the meeting) to meet with residents who were just besides themselves when there was disruption in their neighborhoods. I remember the chief going to homes on streets. You might see his wife, Vanessa, with him, or his kids, because for the chief, it was all about family, and that included his (SEPD) men and women.

Welo told of how she would confer with Nietert over the years on matters before certain decisions were made regarding safety or the police. She said that Nietert would be honest and, at times disagree with her.

She said that Nietert played a large part in helping with the formation of EDGE, the Eastside Departments Group Enforcement, in which South Euclid police collaborate with police from Beachwood, Euclid, University Heights and Shaker Heights to provide mutual aid during critical situations, and the formation of the Heights Hillcrest Communication Center in Cleveland Heights, in which local police and fire departments share dispatch services.

Before briefly speaking, Nietert accepted a plaque of appreciation from members of the SEPD. Nietert, also emotional, thanked those with whom he has worked, and said, “I’m confident that the department and community are in good hands with Joe (Mays) and his staff, and I look forward to your legacy.”

Nietert served as assistant police chief from 2004-07, when he was named chief. He had been an SEPD patrol officer from 1986-97, detective sergeant until 2001, and detective lieutenant for three years before becoming assistant chief.

Council members took turns commending Nietert for his work, including Ward 1 Councilwoman Ruth Gray, a council member for 16 years. “This is a joyous night, but also a sad night,” Gray said, noting that Nietert has been chief through most of her tenure. “He has been an integral part of our community, and everything everyone has said about him is absolutely true. I am absolutely confident, though, that Chief Mays, is just as good and that he will do a good job. I say to Chief Mays, don’t try to fill chief Nietert’s shoes, put your own shoeprint in the sand.

“My heart was a little hurt when (Nietert) said goodbye. I will miss him and I look forward to working with Chief Mays.”

Welo also administered the oath of office to Mays, who has been assistant police chief since 2017. Mays joined the SEPD 23 years ago, and was promoted to sergeant in 2003, and lieutenant in 2015. “I’m confident Joe is well prepared to assume the role and responsibilities of chief of police,” Nietert said, “and that moving forward, the South Euclid Police Department is in good hands and will continue to serve the community with integrity and pride.”

“He’s dedicated to his force, to the residents, and I’m looking forward to serving with him,” Welo said of Mays.

Welo additionally swore in Robert Abele as the new SEPD assistant chief. “Bob’s been very active in our community, in our schools, in his religious community,” Welo said of Abele, who is a lifelong South Euclid resident. “He’s an ambassador for the community.”

Abele has been an SEPD officer for more than 30 years. He served as the department’s traffic commissioner beginning in 2001, and was promoted to sergeant in 2007, and then lieutenant in 2017.

“He’s a dedicated, hard-working, no-nonsense individual who can be counted on to work through problems, and identify solutions and get the job done,” Nietert said of Abele.

In addition, patrolman Michael Fink was promoted to sergeant, and Lt. James Wilson was given the Police Exceptional Service Award. The council meeting was also the backdrop for South Euclid Fire Department’s Jacob McKenrick to be presented with the SEFD Firefighter of the Year Award, and police former senior records clerk Cherie Baldyga, now a city housing inspector, to receive the Dee O’Connor Civilian Police Employee Award.