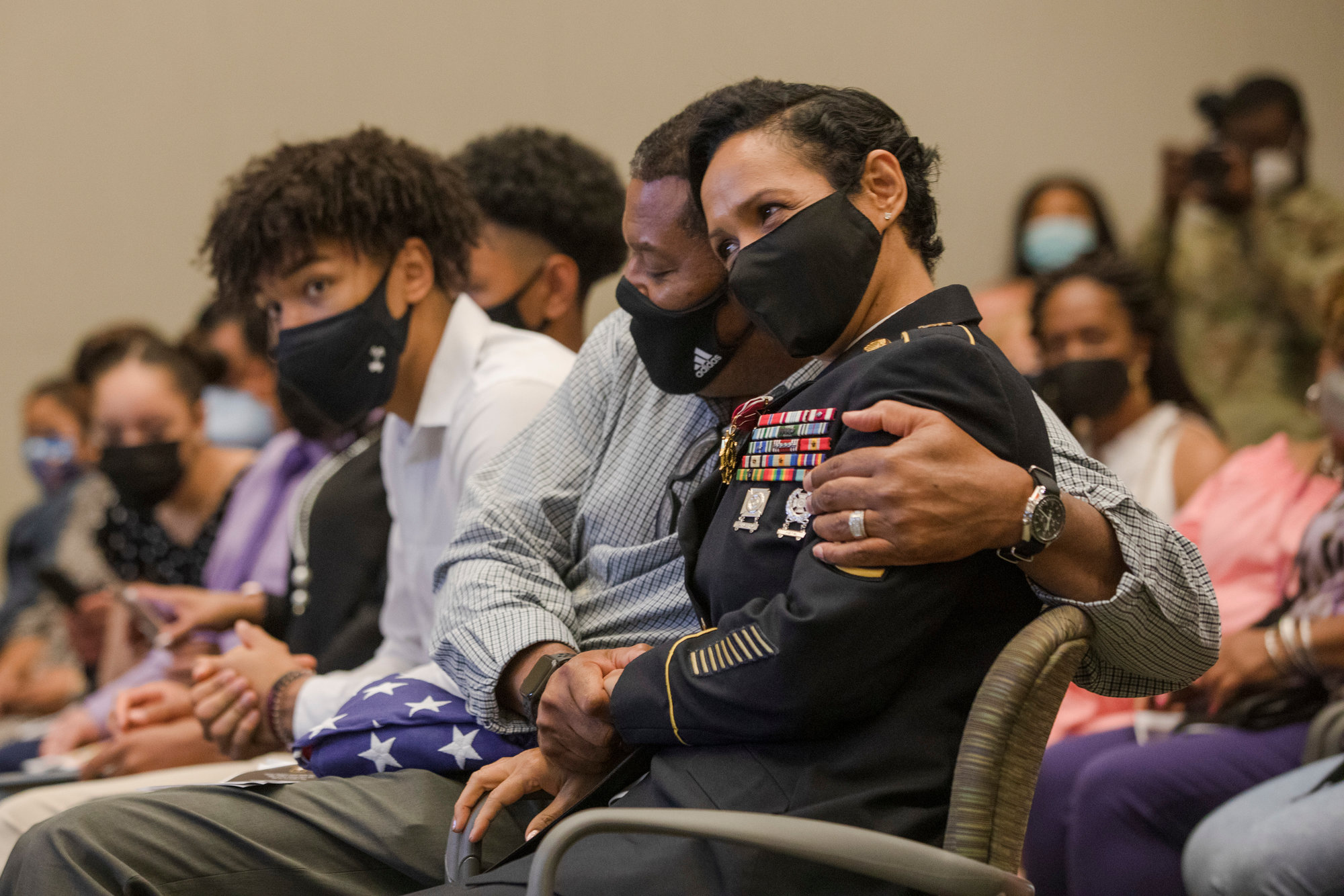 The military is full of sacrifices when it comes to one’s life, family and country. To enlist and make a career out of it all the way through can be an even heavier weight that deserves to be celebrated as a milestone.

It has been more than a year since Sumter-based U.S. Army Central held a retirement ceremony for one of its soldiers because of the COVID-19 pandemic, but on Friday, it honored a 30-year sergeant major with an official ceremony.

Sgt. Maj. Rebeca Kennedy is a native of Puerto Rico who was raised in Lancaster, Pennsylvania. She enlisted into the U.S. Army in September 1991 as an administrative specialist and officially retired after 30 years of service as a human resources specialist.

Throughout her years, she climbed the ranks and received numerous awards.

According to Alicia Allmond, deputy director of public affairs at USARCENT, most military retirees do not seek the limelight for a retirement ceremony, but when they do, it’s a family oriented event.


Three rows of seats were reserved for and filled with Kennedy’s family and friends, including her U.S. Army veteran husband, Walter, and their two sons, 19-year-old Jaden and 15-year-old Jacob, who traveled from Texas, Pennsylvania and North Carolina to celebrate her milestone.

Hester reflected on Kennedy’s time serving her country, stating how amazed he was by her length of service, which totaled 10,950 days, and her growth within the military.

“We’re thankful for that,” he said. “She is the epitome of the professional human resources specialist.”

In her three decades, Kennedy has had 18 separate assignments, according to Hester, for all of which she picked up her life and family to serve without question or flaw.

“We often talk about commitment in the Army, but Rebeca went even further,” Hester said. “She’s a leader, not just a professional. A leader.”

He will always remember Kennedy as a humble and hard-working soldier who held everyone and herself accountable in the work they did. He will miss her critical thinking and focused mind most of all.

“In my opinion,” Hester said, “she’s the best SGM professional that I have served with in 30 years.”


As she was pinned into retirement, Kennedy felt a bittersweet feeling overcome her.

Her support system cheered and gave a standing ovation once she was named a retired soldier.

Kennedy thanked God, her family, friends and now former coworkers and soldiers for helping her achieve her goals in the Army. She especially thanked her husband and sons for supporting her growth to sergeant major, even when she doubted herself.

“My time is yours now,” she told her family, especially her sons who sacrificed their time along the way between two military parents.

She encouraged anyone enlisting into the military to see it through to the end but to do it in increments with small goals set in each increment.

Kennedy didn’t have a prior goal to stay in the Army for 30 years. She made that decision many years after enlisting and eventually became the .01% of sergeant majors who are Hispanic females, which she considered a great achievement.


“You can’t go in saying you’re going to do 30 years,” Kennedy said. “The decision is up to you to find success. Take advantage of the opportunities given.”

Now, Kennedy plans to relax and remain in South Carolina to spend time with her husband and two boys.

“I’m extremely grateful for the opportunities the Army has gave me,” she said. “This is the end of this soldier’s story.”