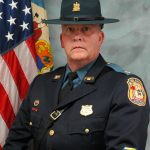 Dover-The Delaware State Police announces today the retirement of Major Robert A. Hudson II who has proudly served the citizens of Delaware with distinction and faithful service for over 31 years.

“It has truly been an honor and privilege to serve the citizens of Delaware as a Delaware State Trooper. I have had a wonderful career filled with many challenges and successes. Meeting and working with the members of our communities has been so rewarding. I have had the pleasure to be alongside so many great co-workers, both sworn and civilian, during this journey. I thank all of those who provided support, leadership, friendship, loyalty and mentoring throughout my career. As those who have retired before me, I will endeavor to display the Core Values of the Division: Honor, Integrity, Courage, Loyalty, Attitude, Discipline, and Service. I will be forever proud to have been a part of such a great agency. I wish the Division and all of law enforcement continued success and safety in the future.” Major Robert A. Hudson II – Special Operations Officer

Major Robert A. Hudson II was hired on January 26, 1990, into the 60th Delaware State Police Recruit Class. He began his career temporarily assigned to Troop 7 in Lewes during his Field Training Officers’ Program (FTO) and, upon completion, was assigned to Troop 7 Patrol. After four years, he was transferred to Troop 4 Patrol in Georgetown. He distinguished himself as an investigator while on patrol and was transferred into the Criminal Investigative Unit, where he was a Youth Aid and Major Crimes Detective. In June of 2000, he was assigned to the Delaware State Police Homicide Unit, and on April 8, 2002, he was promoted to Sergeant and supervised a patrol shift at Troop 7. A year later, he transferred to Troop 4 as a Criminal Investigations Supervisor. In April of 2007, he was assigned to the Homicide Unit, where he investigated numerous cases, including the high-profile case of Brenda Kaye Robinson, who was viciously attacked in 1995. Through his steadfast investigative skills, he was able to use forensic evidence to help solve this decade-long search for justice. This story has been featured on the television program called “Forensic Files ™” in an episode titled “Smiley Face.” On January 31, 2011, he was promoted to Lieutenant and assigned to Troop 3 as the Deputy Commander. He would be assigned to Troop 7 a little over a year later and then to the Office of Professional Responsibility (OPR, commonly referred to as Internal Affairs). On April 6, 2014, he was promoted to Captain and remained the Commander of OPR. On April 17, 2016, Robert A. Hudson II was promoted to the prestigious rank of Major, where he joined the Delaware State Police Executive Staff as the Administrative Officer. He later was assigned as the Special Operations Officer on July 27, 2020.

Throughout his career, Major Hudson was awarded three Exceptional Performance Awards and two Lifesaving Awards. In addition, he was awarded the Superintendent’s Citation in 2011 for his investigation into the arrest and conviction of Derrick Powell for the 2009 murder of Georgetown Police Officer Chad Spicer.

Major Robert A. Hudson II, who proudly served Delaware and its citizens, retired today, Friday, May 14, 2021, after more than three decades of dedicated service. Major Hudson resides in Millsboro, Delaware, with his wife, Kathy. He is a very proud father of Logan, JD, Emily, and Cale.

On June 6, 2021, Major Hudson will enter his new role as the Deputy Principal Assistant with the Delaware Department of Safety and Homeland Security, Office of the Secretary.

“The women and men of the Delaware State Police congratulate Major Robert A. Hudson on his 31 years of distinguished service to the citizens of our State. He has served in an exemplary manner, earning the respect of his law enforcement colleagues, our partners, and our fellow citizens throughout his career. We also commend him for his leadership as part of the executive staff. It has been an honor and a privilege to serve with him, and we wish him and his family all the best.” Colonel Melissa A. Zebley – Superintendent of the Delaware State Police