Roush may be retiring, but he’s not ready for the sidelines | Education 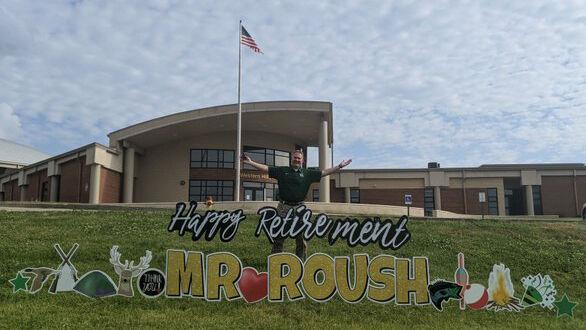 Western Hills High School Principal Greg Roush is retiring, but he isn’t quite ready to stay on the sidelines.

“I’m excited about what’s next. I’m kind of hoping after 90 days to look at interim positions or consulting. I’ll keep working, but I’m not sure where yet.”

Roush, who has worked 28 years in education, will be the WHHS principal until the end of June, and Anne DeMott, who has been named his replacement, begins her new position on July 1.

“I thought about retiring after I got my 27 years in, but I didn’t want to leave the school in the middle of a pandemic,” Roush said, “and I rolled into a new year.”

Roush remembers the date March 16, 2020, when he found out the district was closing schools for a couple of weeks because of the coronavirus.

“I was thinking it would be something like snow days,” he said. “I told our students to take their Chromebooks home just in case, but I had no fathomable idea that we would be out for almost a year.”

Roush, a 1987 graduate of Franklin County High, began his career at Frankfort Independent Schools as a middle school math teacher. He also worked in the Eminence and Shelby County districts before going to work for Franklin County Schools.

Roush served as interim principal at the Academy, assistant principal at Bondurant Middle, principal at Westridge Elementary, the middle school director for FCS, a guidance counselor at Western Hills and the last six years as the principal of WHHS.

When asked what he’ll miss about his job, Roush didn’t hesitate.

“The kids, hands down,” he said. “There was a student who came in to see me when he heard I was retiring, and that meant so much. You hope you reach some kids.

“This senior class was my first kindergarten class at Westridge. It’s special that this group that started with me is my last class. I didn’t plan it that way. It just kind of happened.”

During his tenure in education, Roush also coached football at Frankfort, Eminence, Shelby County and Western Hills, baseball at FHS and middle school girls and boys basketball at Eminence.

He also has a superintendent’s certificate from the University of Louisville.

“I never ventured in that direction,” Roush said.

Roush went into the military out of high school, joining the reserves, and he spent 21 years in the reserves before retiring in 2008 with the rank of major.

Roush and his wife, Kim, have two sons. Seth is a teacher at Elkhorn Middle, and Nick is entering the physical therapy program at Bellarmine.

“They’re the product of Collins Lane, Bondurant and Western Hills,” Roush said of his sons. “I’m proud of what this district has done for them, and if I had it to do all over again, I wouldn’t change a thing.”

With his retirement a month away, Roush is focusing on the future.

“I’m excited,” he said. “It’s a little bittersweet because this is all I’ve done, it’s all I’ve ever known, but I’m still young, and I’m looking forward to the next chapter.”