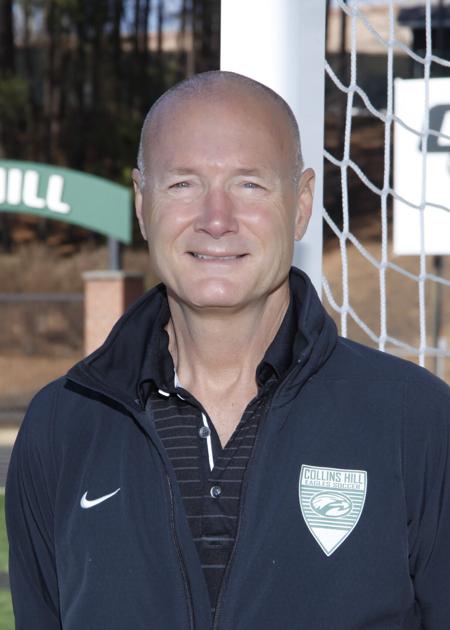 In retirement, Jeff Tinklepaugh said he’ll be going from head soccer coach at Collins Hill High School to head gardener at his new home in Dacula.

“I guess I’ll still have a title,” joked Tinklepaugh, who has coached the Collins Hill girls soccer team since 2004.

Tinklepaugh announced his retirement earlier this year after 39 years in education and 25 years coaching soccer, primarily at Collins Hill. He actually retired five years ago after 27 years teaching physical education at nearby Walnut Grove Elementary School but remained in a part-time capacity at Collins Hill as a coach.

“Jeff has meant so much to our community,” said Collins Hill athletic director Scarlett Grantham. “He taught PE in our elementary school for years, so he’s lovingly known as ‘Coach T’ to many people. When he retired over there, we hired him part-time over here so he could continue to be our head coach. I can’t imagine Collins Hill soccer without Coach T. He’s been such a wonderful influence on so many young ladies and all of us, really.”

A football, gymnastics and track standout at Tucker High School, Tinklepaugh played football at North Alabama, where he earned a degree in exercise physiology, and at that point in his life had only played around at soccer. He said he played every sport growing up (one of his neighbors in Tucker was former Gwinnett County Fire Chief Steve Rolader) but got interested in soccer while at North Alabama.

“We had a professor at North Alabama who was friends with the athletes and he started a soccer team in Florence and we played soccer for him,” said Tinklepaugh. “That’s where I got my first real taste of it.”

Tinklepaugh was an assistant boys coach at Central Gwinnett (under Tom Braun) and Dacula (under Rob Mangino) before signing on at Collins Hill. He has enjoyed great success at the school, directing the Eagles to the state playoffs every year but one, winning two region championships and advancing to the Final Four two times. He has been named Coach of the Year on several occasions, including 2011, when he was named the Gwinnett Daily Post’s top girls coach.

“We’ve had some fantastic players come through there,” he said, adding that beyond wins and losses, he enjoyed getting to know his players on a personal level and said he remains in touch with many of his former charges.

‘One run after another’

When asked if any particular season at Collins Hill stood out in his memory, Tinklepaugh said, “It’s been one run after another. I can’t say any one season was any better than the next one or the one before. They all were different. The thing I’m most proud of is establishing some traditions that have carried on and — I hope — have been inspiring to some of my players.


Success! An email has been sent to with a link to confirm list signup.


Error! There was an error processing your request.

“I always used a quote from some athlete as the premise for my pregame talks, and players still come up to me and say they’ve still got every one of those (quotes) from every game they played for me. We had senior dinners over at the house and we’d talk about the season, and those have all been very enjoyable to get to know the players on a more personal level. We would also do a playoff dinner where we have a cookout at the house with all the girls. I really enjoyed all those experiences in team bonding and getting to know those high school kids more personally and learning more about their lives.”

Although his high school coaching career has drawn to a close, Tinklepaugh will keep his foot in the sport as he will continue to coach on the club level at the Gwinnett Soccer Academy, where he works with the youngest of players.

“I still coach club soccer at GSA and I will continue to do that, and I coach in our academy program with two age groups and I absolutely love the little kids,” he said. “I love coaching the academy program and introducing these young ladies to athletics and being competitive.”

Although he said it hasn’t hit him yet, Tinklepaugh said he’s pretty sure he’ll miss high school soccer when it comes around again next spring.

“I’ve often said that high school (soccer) is what feeds my competitive side,” he said. “I’m a very competitive individual and I often get myself in trouble for that — no matter what I’m doing, I’m going to do it on a competitive level. I’ve gotten into cycling and I’ve had a few crashes that resulted in getting a couple of operations. So my wife encourages me to ride — not race — my bike, but that’s just not in my DNA.

“So high school has fed my competitive side, where I really have the opportunity compete and play to compete. I’m wondering how I’m going to miss that. I’m thinking I might. In club, I’m coaching the younger age groups and we’re competitive, but that’s not our primary focus, which is player development. So that might be the big thing that I miss — the opportunity to compete and play for something on the line. I think I am going to miss that and I’m going to miss the adult relationships and seeing a person grow to a young adult and choose a career.”

Besides being in charge of his garden and coaching at GSA, Tinklepaugh — who before arriving in Gwinnett County taught a variety of exercise-related courses at Georgia State, Georgia Tech and Floyd College — said he and his wife Pat (they’ll celebrate their 41st wedding anniversary this year) are planning some extensive travel.

“My wife has been tremendously supportive of this coaching addiction that I have,” he said. “…I needed to free up the calendar a little bit. We built a house in Dacula over the summer and I’m going to become the head gardener and pool boy there. We also have some traveling we’d like to do. Our oldest daughter introduced us to international travel and we’ve got the bug, so we want to take advantage of a schedule that’s a little less regimented.”

“Jeff has invested his whole heart in our girls and in our program,” said Grantham. “I can’t imagine how much he’s helped the sport of soccer grow in our county and in our state. It’s hard to believe he won’t be next year — I’m not sure the reality of that has set in yet.”

Grantham said that Michael Burrell — who had a six-year run as the boys coach at Collins Hill and has worked as an assistant under Tinklepaugh — has accepted the position as interim head coach of the girls program.

“(Burrell) has agreed to be our interim coach until we have time to find somebody,” said Grantham. “But it’s going to be hard to find somebody to replace Jeff Tinklepaugh.”