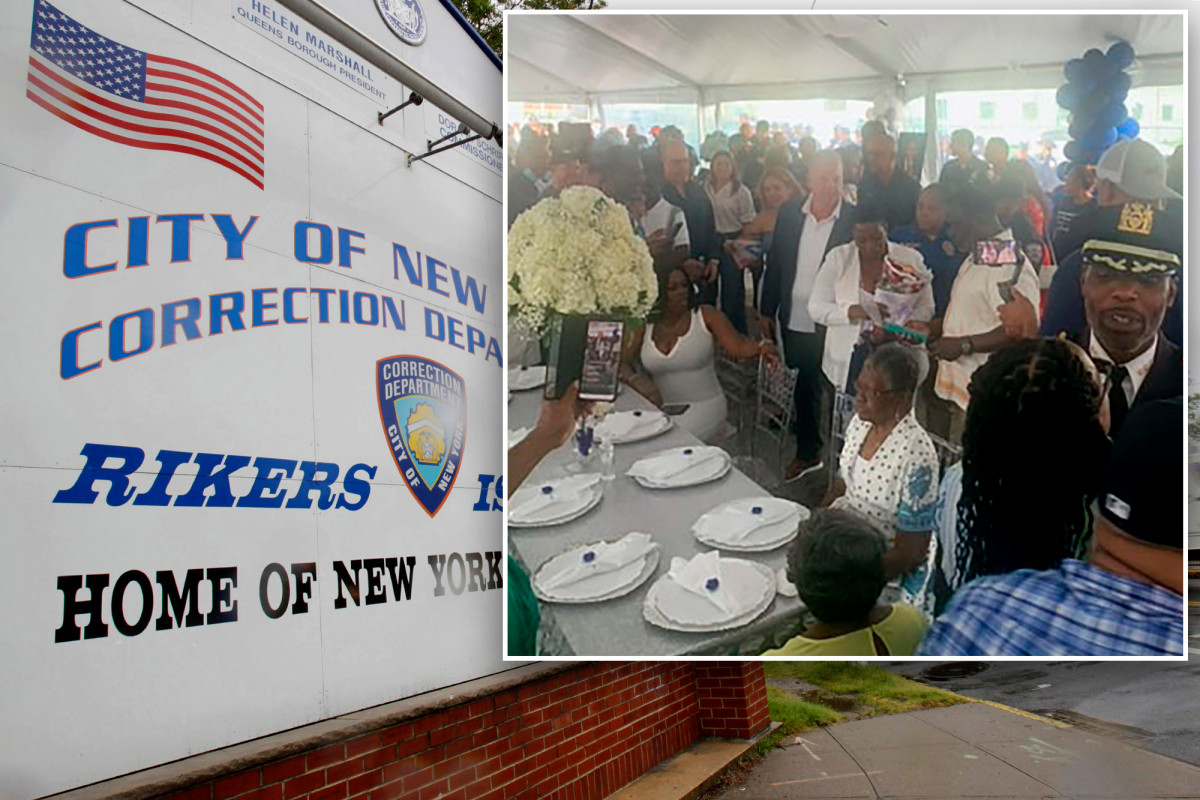 Two New York City corrections officials were lavished with retirement parties on Rikers Island this week, with hundreds of employees enjoying extravagant onsite celebrations — complete with a water-cannon salute and a marching band — even amid a staffing crisis and surge in inmate violence inside the troubled jail.

Attendees brought plenty of booze, too — scotch, bourbon and wine flowed freely during the bash, the sources noted. An FDNY boat even gave a water cannon salute to the guest of honor.

The party for Scott, held Thursday, sent her into retirement with a marching band, and deejays entertained at both affairs — galling witnesses and sources.

“Officers are working their asses off in jail, and to throw a party with this much extravagance is like a slap in every officer’s face,” one corrections source fumed, saying guards have been forced to work double and triple shifts for months. “It goes to show how out of touch these people running the Corrections Department are. They can’t run a friggin’ jail, but they can throw a helluva party.”

A federal monitor in May said “systemic and deep-seated” issues at the city’s jails have created a “pervasive level of disorder and chaos.” The monitor’s report was released just hours after Correction Commissioner Cynthia Brann announced she would be leaving at the end of May.

She was ferried to her five-hour affair on the Rikers complex in an SUV with lights and sirens blazing, video obtained by The Post shows.

Jennings emerged to a cheering crowd as someone held an umbrella over her head to fend off the rain, as a singer soulfully crooned during her arrival.

Blowing kisses to the waiting guests, she was escorted by the incoming Acting Chief of Department Kenneth Stukes, who was in a dress uniform.

Wearing a low-cut white blouse and pantsuit with green heels, a long chain of pearls and a yellow rose corsage, Jennings walked into the party along a white carpet leading into a large rented tent packed with at least 100 on-duty personnel, plus retirees, friends and family members. At one point, admirers tossed rose petals at her.

“I’ve been at weddings with less pomp than this,” one witness quipped.

The event reportedly cost at least $15,000, sources claimed, although it was not clear who foot the bill. In addition, they said, about a dozen corrections officers served the food. The party, featuring fare such as chicken parmigiana, pasta, eggplant, sausage and salads, kicked-off at noon and lasted until about 5:30 p.m., witnesses said.

The Rikers Island bridge was shut down so Jennings could pose for pictures, a witness said.

That’s when an FDNY boat sailed up, shooting off its water cannons to salute her, video posted to Facebook by one attendee shows.

“She’s having a parade,” one witness said.

“There were tons of people videoing and taking photos. The ceremonial unit, and the Emerald Society pipes and drums unit performed. There was over 100 uniformed staff, plus retirees. Amazing that there is a staff shortage in the jails that they found close to 100 on-duty personnel to attend,” griped another insider.

The who’s-who of on-duty DOC people included “all ranks, from the bottom to the top: officers, captains, deputy wardens, chiefs,” the witness said, noting that Vincent Schiraldi, the newly appointed Corrections commissioner, was also present.

“He seemed taken aback by it. You saw it in his facial expressions — he wasn’t comfortable being there. I think he expected a sendoff, but not something short of a wedding reception,” the witness said. Schiraldi could not be reached for comment.

Despite a prohibition of booze in the jails, “there were people bringing liquor to the party: Scotch, bourbon, wine. Somebody brought a case of wine,” the witness said.

“As always making the impossible POSSIBLE. Your (sic) the man Billy,” gushed one Ryba fan in approval.

The other party, held Thursday for Scott, was smaller but equally lavish, sources said. A spirited marching band played during Scott’s affair, which featured a deejay, and Scott, in a form-fitting white dress, thanked her guests during a lengthy speech from a microphone.

“To each person here, I just want to say to everyone: thank you, thank you for coming out, I love you,” said Scott, 53, who joined the department in 1991 as a Rikers warden.

The back-to-back fetes came on the heels of an apparent tragedy: an inmate who was found unresponsive and died hours later, records show.

The inmate, Robert Jackson, was being held on burglary charges and was discovered unresponsive in his cell late Wednesday night after a guard had walked off duty, a source said.

A spokesman for the union, the Corrections Officer Benevolent Association, said the guard had been working 20 straight hours with no meals or rest and had logged his repeated requests to get relief with no success. He said the inmate died 12 hours after he left.

“And nothing illustrates that better than the events that occurred over this past week,” he said.

An insider said DOC staffers “shook down” fraternal groups and unions for donations to help defray the cost, but it’s unclear how much they raised.

Boscio did not attend the parties and the union did not fund them or encourage members to go, the spokesman said.

The Department of Correction said it provided the tent, tables and chairs for the parties — which it referred to as ceremonial events — but not the food. It said staffers chipped in for the buffets and if there was any booze, if it was unsanctioned. Attendance by colleagues at a retirement party during working hours was not uncommon, according to the department.

As for the inmate’s death, a probe was underway.

“Our deepest sympathies go out to Mr. Jackson’s family and loved ones during this difficult time. We are looking into the tragic circumstances and a full investigation is ongoing,” Schiraldi said in a statement.

The parties irked those who noted the daily struggle of rank and file workers.

“In two of the jails, people on OT [are] doing triple and quadruple shifts” of 24 hours, sometimes 32 hours, the disgusted witness said. “The whole department is falling apart, but we’re throwing a big party.”