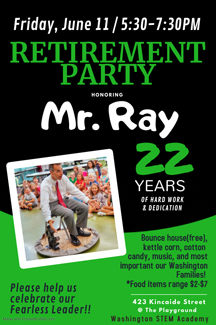 The community will be able to celebrate the retirement of Tom Ray, principal of Washington STEM Academy, with him.

Ray is retiring at the end of the 2020-21 school year after 22 years as principal at Washington.

Tiffany O’Malley, administrative assistant to the principal, said the party has been in the plans for about a month. Ray didn’t know about the party at first, she said, but due to his schedule, it was decided to let Ray know.

At the retirement party, there will be a bounce house,  which will be free.

There also will be a vendor there that will sell kettle corn and cotton candy, which will help offset the cost of the party. The school’s PTO will pay for the difference, O’Malley said.

There will be music played at the party.

O’Malley said the idea for the party came from her and secretary Kendra Smith. O’Malley said Ray always wanted to do a carnival-themed back-to-school day with bounce houses and kettle corn, so O’Malley and Smith decided to do it for his retirement party.

The retirement party will be open to the public.

O’Malley said they figured Ray has impacted so many people in his 22 years at Washington, the retirement party shouldn’t be restricted to the people currently at Washington.

When asked what she hopes will come from the retirement party, O’Malley said she just wants Ray to see his impact on the community.


Please fill out the form below to submit a comment.