Planning To Retire, Bob Wood Has High Hopes For Southside 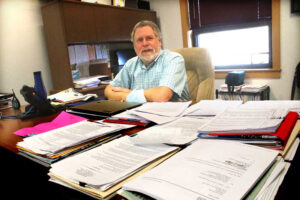 Planning To Retire, Bob Wood
Has High Hopes For Southside

By JIM KEVLIN • Special to www.AllOTSEGO.com

By the time he retires on Dec. 31, the Town of Oneonta’s municipal water system will be complete, and condos and houses on Southside Drive will be emerging, veteran Town Supervisor Bob Wood is predicting.

Simply, “the city does not have any more available land,” said Wood in an interview Friday, March 5, on announcing his retirement.

A handful of developers have already approached him with plans, he said, adding, “A lot of people are going to be happy on Southside Drive.”

The $8-plus million water system and a $3-plus million town highway garage, just completed behind Town Hall in West Oneonta, will allow Wood, supervisor since 2008, to leave office with a sense of completion, he said.

He also expects to see development on the town’s end of Oneida Street, where developer Eugene Bettiol Sr. was planning a hotel, plaza, diner and others attractions at the time of his passing in December 2017. Under new owners, that’s still alive, the supervisor said.

During 12 years in office, Wood has had historical forces on his side: The tax burden in the town – town, county, school, and fire district levies – is about $10 per thousand, half what taxes are in the city, a happy situation, he said.

As it happens, Bob Wood is a city boy, as in City of Oneonta. He was born in Fort Mead, Maryland, where he father, also Bob, was in military service. But a few months later, the Woods brought their baby boy home.

His father taught shop in Oneonta schools, then was certified to become a guidance counselor. He passed away in 2018 at age 86, with son Bob, his brother Chris and sister Melinda surviving.

Graduating from SUNY Delhi with a degree in construction, Bob was a beer salesman – ask him about getting Coors into The Otesaga – then ran Woody’s Market on Spruce Street for 18 years.

He also did cabinet work, including the circular table in City Hall where Common Council members sit during their semi-weekly meetings.

Himself elected to Common Council in 1994, he was asked by then-mayor David Brenner to negotiate the fire-protection contract with the town, not knowing he’d find himself on the other side of the table in years to come.

“It’s the same issue,” said Wood. All these years later, “they haven’t really solved anything or changed anything.”

Moving to the town in the early years of this century, when his boys Ben, now 36, and Nick, now 34, were in their teens, he was soon drawn into town politics, running against longtime Supervisor Duncan Davie, state Sen. Jim Seward’s longtime chief of staff, he lost.

He oversaw years of progress: Ioxus moved into the former Soccer Hall of Fame, Northern Eagle Beverage moved from the city’s Railroad Avenue to a new plant in the town and, lately, Brooks’ BBQ is moving and expanding its bottling plant to an East End shopping plaza.

Throughout the controversies – fracking, the LNG tankers and much more – Bob Wood remained a calm, friendly, unflappable presence.

A few years ago, he and wife Carol built a house on Winney Hill Road. Not a single step anywhere, he said. That’s where they plan to retire, and enjoy their grandchildren.

Bob and Carol also have a 35-foot fifth-wheel camper and are planning a 6-7 week cross-country trip.

As of last Friday, Wood noted 299 days remained in his term. But who’s counting? Adventures await.