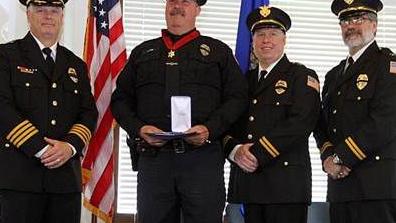 BELOIT—Nerves of steel and a good sense of humor are what retiring Beloit Police Officer Robert Lynn said make a good candidate for the force.

It was an emotional day on Wednesday as Lynn celebrated his 57th birthday and last day on the job. Tears were shed as the sensitive Lynn recalled the many moving, and sometimes haunting, memories of protecting and serving the community.

Lynn got his start at the Beloit Police department a bit later in life at age 39 after the steel mill he worked for in Illinois closed. He was pursuing a curriculum with emphasis on corrections, but moved into law enforcement for more job opportunities. He recalled meeting former Police Chief Sam Lathrop who was teaching a course on patient management and encouraged Lynn to apply for a job in the Beloit department. Lynn moved to Beloit, and the rest is history.

Lynn learned the career was filled with bits of adrenaline followed by lots of report writing in between serving people, both law abiding and not, in sometimes trying circumstances.

No matter the workload, Lynn would volunteer for extra duties and would stay on as long as necessary to get the job done.

“I didn’t see any reason to make our customers wait,” he said.

He served Area 2 or B312 with parts of the east and west sides of the city and the downtown business district. He jumped in to help with community service such as the Shop With a Hero event allowing children and police to shop together for gifts near the holiday season. He always followed the children’s strict orders when shopping.

“I liked that they wanted to buy for people other than themselves,” he added.

Other times were more challenging, trying to let people know it wasn’t personal when he enforced the law and had to arrest them or give out a ticket.

Through it all he met a lot of people in their vulnerable moments and admits he struggled to stay professional as he watched families grieve. He witnessed the aftermath of bad accidents, suicides and death investigations.

He recalled helping people stuck in inclement weather, doled out advice and helped one woman who was trying to end her life who became quite angry with him.

For all the emotional work, he strongly encouraged other officers to take heart and to use the department employee assistance program if needed.

“If anyone is struggling with anything they can call up and get help. I encourage officers to take advantage of it,” he said.

Lynn said he never enjoyed carrying a gun or wanted to hurt anyone. It’s been a hard year when Lynn and other officers hear about anti-police sentiment. He said bad people can be found in the ranks of police just like in any other occupation.

“I don’t approve of some of the things police have done, and some slip through the cracks,” he said.

Lynn said he does support more regular psychological exams for officers and mental health support and follow-up. However he said a strong police presence will continue to be necessary to ensure safety.

Lynn said he has been touched that some have thanked him for his service during the pandemic, similar to how people thank veterans.

Sgt. Brian Daugherty said he and Lynn started together in 2004 and have always worked overlapping shifts.

“Bob has compassion for folks that sometimes get clouded with age. We see a lot of bad, but Bob oftentimes finds the good and has the ability to draw up better decision making capabilities in people that other officers might not have the courage to do,” Daugherty said. “He is very patient with people. Bob has a convincing tone and thought process when he has frank conversations.”

Lt. Dave Elrod also started in 2004 with Lynn. The two became close friends and would get together with the wives and children. Elrod learned from Lynn’s expert bass catching techniques, but also his gentle ways.

“He’s truly passionate about the job and he takes it to heart. He’s very caring and hard working,” Elrod said.

“Sometimes his words or his tone might have been harsh, but it was true and so was his heart,” Henderson said.

Lynn, who is married with two teenagers, hopes to catch up on lost time with his family post-retirement and is eager to return to civilian life where he might get a part-time gig in a hardware store and do a little fishing. He opened his first Facebook account this week to get in touch with friends which he joked was an overwhelming experience.

He said his retirement has been unexpectedly emotional.

“It’s an amazing emotional roller coaster,” he said. “I will never be the same person I was before I was a cop.”