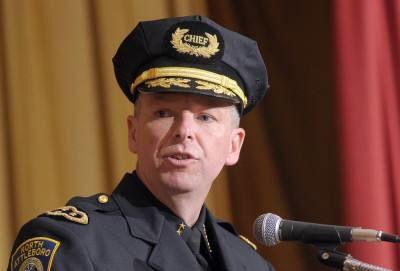 NORTH ATTLEBORO — John Reilly started out behind the scenes as a dispatcher and rose to become the leader of the police department.

In June, Reilly, 53, will call it a career after 33 years with the department — the last decade as chief.

News of his impending retirement comes as the department’s second-in-command position is currently vacant, following the retirement last week of Capt. Joseph DiRenzo.

Reilly said he will work with whoever is chosen to be the acting chief for two months prior to walking out the door.

In 1988, Reilly began as a dispatcher, sending officers out on calls. He rose to become chief of the detective division before being chosen to succeed Chief Michael Gould Sr. in 2011.

Reilly followed his father, a state trooper, in choosing a career in law enforcement.

“I got lucky enough to be chosen for a position in the North Attleboro Police Department and the rest is history,” Reilly said.

He had been chief for two years when New England Patriots star Aaron Hernandez was arrested for shooting Odin Lloyd to death in the North Attleboro Industrial Park.

Reilly was already a seasoned detective and knew most of the state police detectives on the case from other murders in town he helped investigate.

He said he has enjoyed his career and working with members of the community and his colleagues.

“I’ve enjoyed it immensely and it’s all because of the people I work with,” Reilly said.

Word spread of his pending retirement during a town budget meeting aired on cable television.

Now police officers use portable computer terminals in their cruisers, fingerprints are taken on a high-tech device and dispatchers work on computers and monitor multiple large television screens.

During his tenure as chief, the department was accredited by the Massachusetts Police Accreditation Commission, an independent agency that audits police departments every three years.

The audits are done to ensure the department’s policies, procedures and facility meet all national and state standards.

The achievement is prized in law enforcement as it reduces litigation and makes it eligible for state and federal grants.

Gaining accreditation was a product of teamwork in the department, Reilly said.

The patrol officers now serving the town have all been hired by Reilly, DiRenzo and Sgt. Chris Ciccio, who retired last year..

The chief said he plans to stay active in retirement. He said he wants to fish, travel and spend more time with his wife and their three adult children.