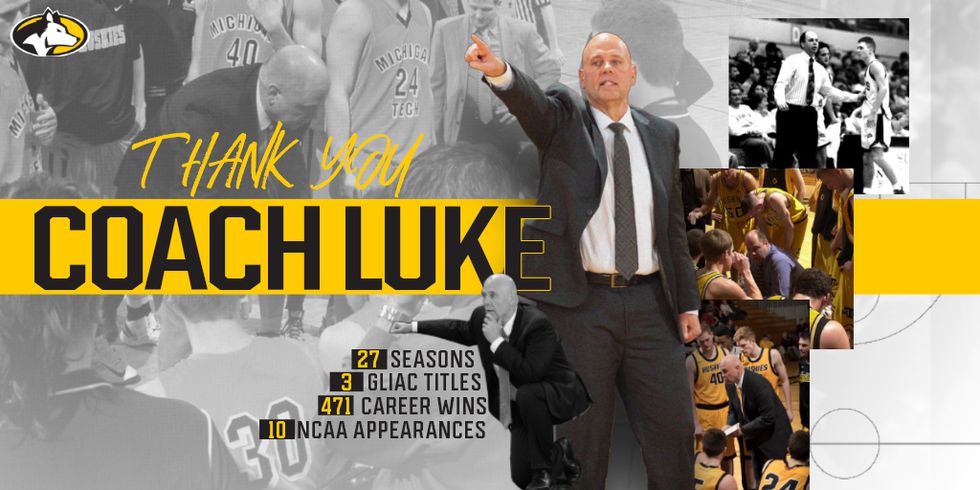 HOUGHTON, Mich. (WLUC) – The following is a press release from the MTU Athletic Department:

“It’s hard to believe 34 years have gone by since I started at Tech,” Luke said. “My time here has been awesome, and my only regret is not winning an NCAA Championship. I have met so many wonderful people who will end up being lifelong friends. I must thank all the student-athletes and coaches who have played and worked alongside me. It has been a privilege and honor working with them as they are the main reason for the program’s success. A special thanks to Ted (Kearly), Rick (Yeo) and Suzanne (Sanregret) for helping me and our program be successful.

“A very special thanks to mom, dad, and family who always made an effort to attend games (and Dad coach). A most heartfelt thanks to my wife Barb and my children. Without their support, I would not have survived. My hope for the future is to become MTU’s number one fan and continue enjoying all of our sports successes.”

Luke came to Michigan Tech as a student-athlete in 1977 and played three seasons under coach Bill Gappy. He accumulated 513 points and 262 rebounds during his playing days and helped the Huskies win the 1980 Northern Intercollegiate Conference Championship, earning the nickname “Cool Hand Luke” in reference to his outside shooting touch.

Prior to being named the 11th Head Coach of the Michigan Tech men’s basketball team in May 1994, Luke served as the top assistant and chief recruiter for the Huskies for seven seasons (1987-94). He also brought four years of experience as assistant coach for his alma mater, Westwood (Ishpeming) High School (1982-86).

Luke was awarded Basketball Times National Coach of the Year in 2002-03 after leading his squad to a 29-3 record and a No. 1 national ranking in the final regular season poll. He was also named the NABC Midwest Region Coach of the Year in 2001-02 and 2002-03. The Huskies set school records for wins (29), winning percentage (.906), home wins (15), and consecutive wins (15) in 2002-03. They also made GLIAC history by winning 17 regular season league contests and becoming the first conference team to host an NCAA Regional.

“It is very difficult for me to sum up what Coach Luke has meant to the men’s basketball program, athletic department and university in a few sentences,” Athletic Director Suzanne Sanregret said. “Kevin has elevated our men’s basketball program to one of the best in the country and has always done it with integrity and professionalism. He has treated his student-athletes like family and has wanted the best for them in the classroom and on the court. He has worked tirelessly to prepare them for life after Tech. Not only has Kevin been an outstanding coach to student-athletes he has mentored countless other graduate assistants, assistant coaches, and head coaches in all of our sports.

“I want to personally thank Kevin for his time and energy spent in his role as Associate Athletic Director. He was instrumental in many of the Athletic Department initiatives over the past 15 years and always approached the projects with the entire department in mind. I wish Kevin and Barb all the best as they begin a new chapter in their life.”

Two-time All-American Matt Cameron weighed in on Coach Luke’s impact, “For as long as I can remember, Michigan Tech men’s basketball teams have been known for their intelligence, hard work, attention to detail, and team play. Coach Luke embodies those ideals and has created and cultivated that culture throughout his career as head coach.

“I made my decision to play basketball at Michigan Tech because of Coach Luke and those very ideals. Hard work and teamwork result in success, on and off the court, and Coach Luke taught that everyday. Basketball is a game, and a game can go either way on any given night. Coach Luke understood that and poured his energy into his players not only on the court, but off it as well. He understood that the most valuable gift he could give us wasn’t necessarily getting us to the NBA, but teaching us that through hard work, teamwork, and motivation, we could accomplish anything we wanted to do. Every player that has come through Coach Luke’s program has left with the understanding that there are no obstacles that exist that will prevent them from getting any job done.

“Coach Luke is as important a person in my life as anyone, to this day. My respect for him and my gratitude for what he made me cannot be measured. Coach Luke is Michigan Tech basketball, and I am so proud to be a Husky. I only wish my son could have played for him. Congratulations on your retirement Coach, it is well deserved, you will be greatly missed.”

Luke forged a reputation as a dedicated worker with an intense, competitive drive in all facets of life. In addition to his basketball responsibilities, Luke served as Michigan Tech’s Associate Athletic Director, a post to which he was named in May of 2005. He was also the Head Cross Country Coach for the Huskies from 1987-93 and was named the 1993 Women’s GLIAC Coach of the Year. He was instrumental in getting a full-time head coaching position for cross country and track and field when he was named Head Men’s Basketball Coach in 1994.

An announcement by Michigan Tech Athletics regarding the future of the men’s basketball program will be made at 9:30 a.m. Friday morning.