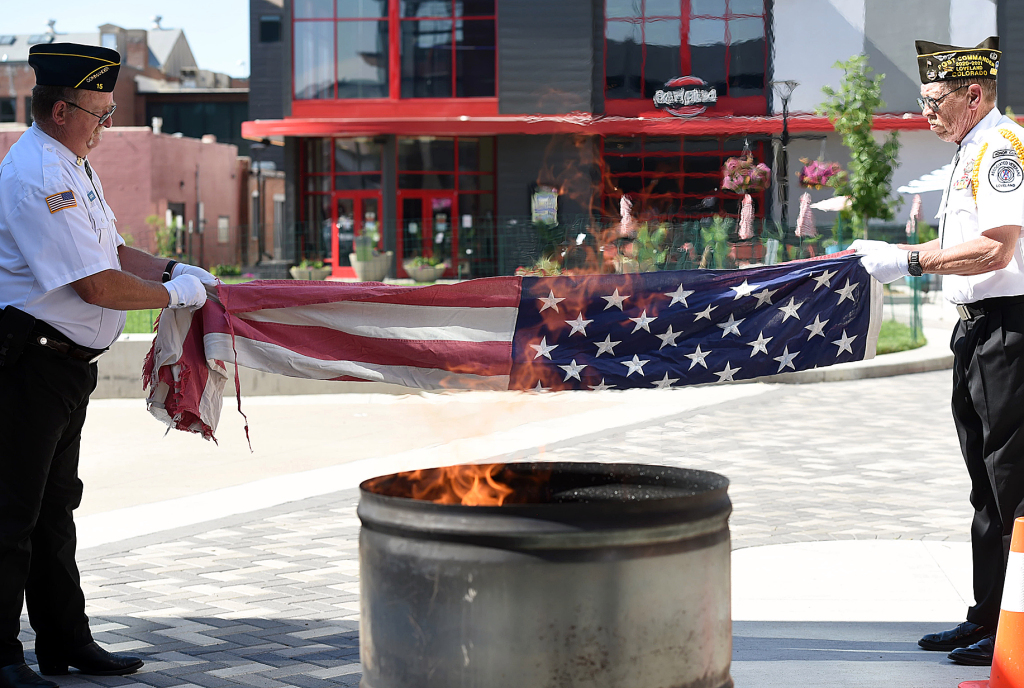 To honor Flag Day, as well as the Old Glory itself, Loveland veterans held a flag retirement ceremony in the Foundry plaza early Monday evening.

Flag Day, which falls on June 14 and the birthday of the United States Army, is meant to commemorate the adoption of the “Stars and Stripes” as the United State’s official flag.

To honor it locally, veterans from the Associated Veterans of Loveland gathered together with the community to learn more about the flag and its symbolism and to retire several old flags.

Members of the American Legion and Veterans of Foreign Wars were present to commemorate the flag under which they served in front of a small crowd of community members, including Mayor Jacki Marsh and other City Council members.

“The flag is a living symbol that calls to our spirit,” said Associated Veterans of Loveland president Rex Berg during the ceremony. Berg also said that the flag is the ultimate representation of the history and story of the U.S., adding that it is a symbol that “makes our past and present one.”

“That is the flag that has been (flying) since the beginning of our nation,” said Tom Parker, commander of Loveland’s VFW Post 41.

During the ceremony, several Loveland veterans recounted the history of the flag. The ceremony also featured the playing of taps, as well as a gun volley.

To honor the flag and what they said it stands for, the veterans retired several old flags. Before burning them in a small container at the side of the stage, veterans folded the flag in the traditional 13-fold manner with the meaning of each fold read out loud.

According to the National Flag Foundation, whenever a flag is to be presented during a ceremony it must be folded in the same fashion every time, with two handlers folding it in half twice lengthwise and then 13 times in a triangular fashion until a triangular “pillow” is formed the only the “blue field” showing on the outside.

Each fold is meant to signify something different, including a symbol of life, the belief in “eternal life” and to honor veterans.

Max DeCamp, commander of the Associated Veterans Honor Guard, said that the group works carefully to consistently follow flag code to honor not only the veterans they sit alongside, but all the ones who lost their lives.

“It’s very important to us,” he said.

As flags were entered into the flames, the plaza grew silent and the crowd stood at attention as the Stars and Stripes were formally retired.

For many who were there, honoring the flag in the proper way is a deeply important process.

Ron Schlatter, a member of the Associated Veterans as well as Loveland’s Elk Lodge and a retired Army first sergeant, said honoring the flag, something that he said symbolizes “unit and respect,” is big for him.

“The flag is very near and dear to my heart,” he said.

“It is the symbol of our nation, it is the thing that has brought us all the way through from the beginning to now,” Parker said. “It is an honor to belong to a country where we are free, and it is because of that flag and how many people who have died for that flag.”