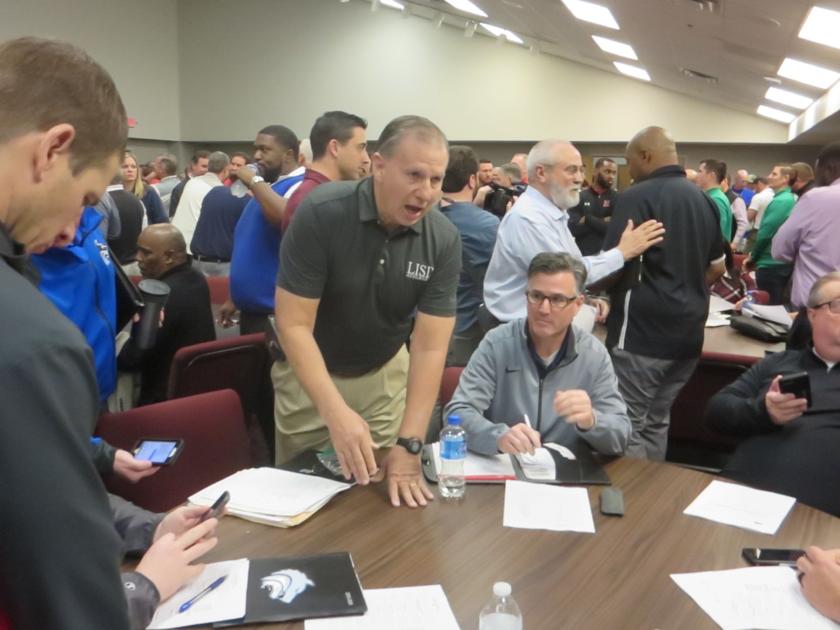 After more than 40 years in public education and the last seven years at Lewisville ISD, longtime athletic director Tim Ford has announced his retirement, effective December 2021.

“LISD has been extremely fortunate to have Coach Ford at the helm of our athletic department for the last seven years,” said Dr. Kevin Rogers, superintendent of schools. “Our programs have excelled under his leadership and he leaves an incredible legacy in our district.”

LISD student-athletes excelled during Ford’s seven-year tenure as athletic director with 563 students earning athletic scholarships to compete collegiately. In addition to student-athlete successes, Ford made it a priority to provide athletic facility enhancements throughout the district, including new arenas and multi-purpose facilities at several of the high schools, press box and playing surface renovations, and various facility upgrades and track resurfaces across the district.

“My experience in Lewisville ISD has left me incredibly grateful as I move into this next phase of life,” Ford said. “What an honor it has been to lead the amazing coaching staff and student-athletes in this district. I have seen countless practices, games, competitions, tournaments and championships in my time at LISD, and I couldn’t be more proud of where our programs stand today as I pass the reins onto the next athletic director.”

Ford joined LISD from nearby Grapevine-Colleyville ISD, where he served in the same role from 2007-14. Prior to moving to administration, Ford spent 30 years on the sidelines in various coaching positions and in the classroom teaching.

“When you talk about the benefits of athletics, probably the greatest benefit is the confidence that an athlete has and that confidence carries over into everything they do,” Ford told LISD back in 2020. “They pick up leadership skills, they’re learning the ability to work with others in a team situation, they’re put into challenging situations which turn into problem solving and that’s problem solving in a stressful situation so it’s a great benefit in the work field.”

As a coach and educator at Colleyville Heritage from 1996-07, Ford was the assistant head football coach and defensive coordinator, assistant track coach and taught biology. His teams made the playoffs six times during that span and he was also nominated for Teacher of the Year in the classroom.

Ford had a similar role at Grapevine (1993-96) and Euless Trinity (1986-92) where he coached football and track and taught biology. As an assistant coach at Trinity, his football teams made the playoffs four seasons and were a state finalist in 1992. Ford coached an individual girl to a record-setting state championship in the discus during his time in Euless.

He received his Bachelor of Science in Health and Physical Education from the University of Texas at Arlington in 1976 and his Masters of Education Administration from East Texas State in 1980.

Ford has been married to his wife Linda, an honor choir director at HEB ISD, for over 40 years and they have three sons: Sam, Ty and Cole. In his retirement, Ford plans to spend time with his family, including his nine grandchildren.