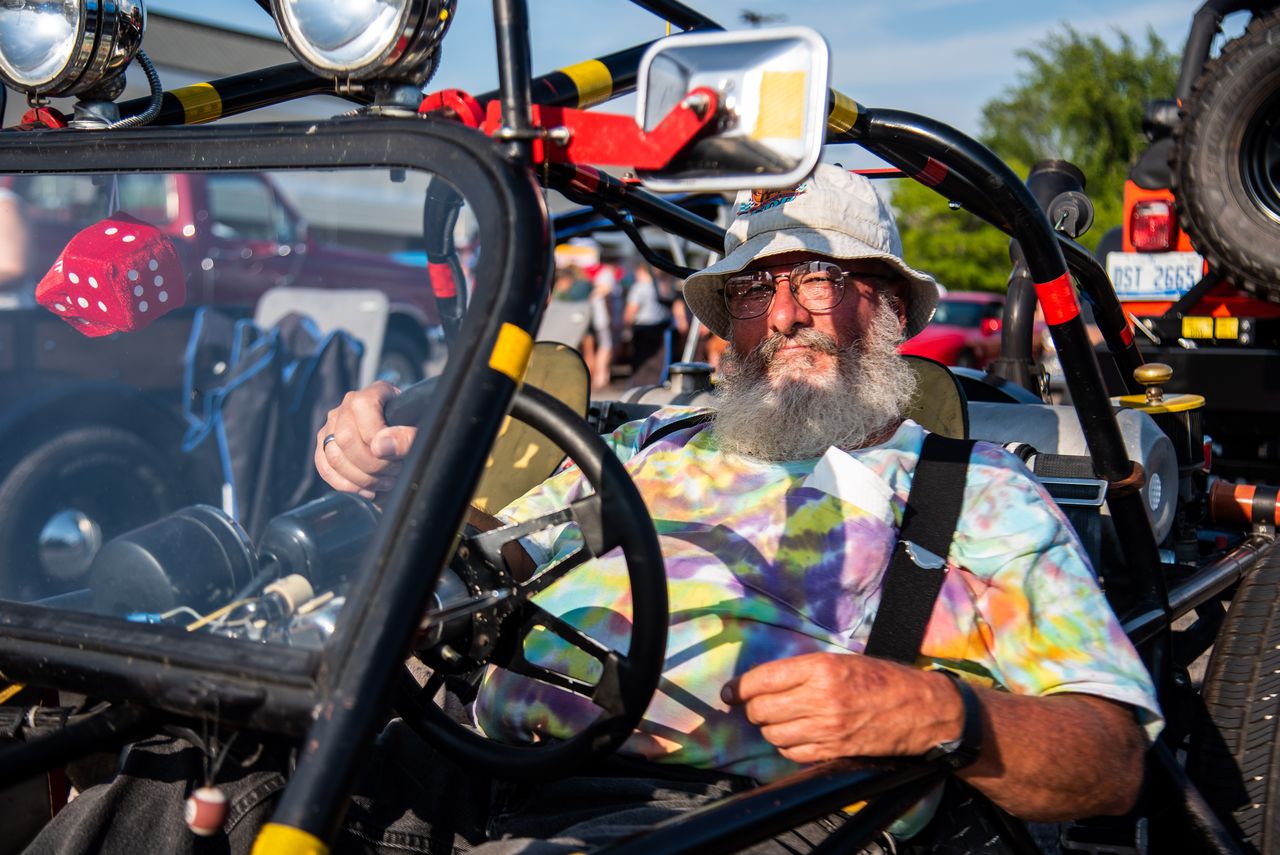 FLINT TWP., MI — Don Scharich reclined in his lawn chair with his feet propped on the front right tire of his 2016 assembled Roadster as car enthusiasts strolled past.

Scharich’s vehicle had little in common with the antique trucks and souped-up sports cars parked around it.

Still, the recent retiree seemed content as he greeted people between sips of his water bottle.

“My mother used to tell me, ‘Don’t get old,’ but I couldn’t help but wonder what I’d do when I retired. I never had hobbies,” the 65-year-old Burton resident said. “I found one though, and I never thought life could be this good.”

Scharich attended every Tune-Up event from Monday, Aug. 9 to Friday, Aug. 13. He was even in Linden, he said, where people held their tents down as waves of storms swept across the region.

At each event, Scharich received comments and questions about the door knobs that hold the air filters down on his Roadster, the rubber band stretched across the gas pedal or his “guardian angel,” a yellow skull that sits at the front of the vehicle.

While most things on the Roadster are impractical or otherwise unnecessary, he said each of them are conversation starters.

Scharich said the people — and his interactions with them — are what he enjoys most about his hobby and car shows.

“I go into a convenience store, and it might take me 30 minutes just to get gas because people are asking me questions about my Roadster,” he said. “This hobby makes me stand out to people. It’s all about the people. I get to see their heads turn and their smiles.”

Scharich’s favorite trip in his Roadster was to the Mackinac Bridge in September 2020.

He and his brother, who died in a motorcycle accident in July, drove side-by-side in their roadsters and eventually stayed the night on Mackinac Island.

Since retiring, Scharich and his Roadster travel 60 to 70 miles every day, and he has put 6,600 miles on it since April 5.

In the winter, Scharich can be found in his heated two-car garage tinkering with his vehicles.

“It is great to retire when you have something to do with your time. You can’t wake up saying, ‘I got all day. Now, what do I do?’” he said. “If you got lots of money, you can do lots of things. I don’t have lots of money, but this is perfect for me.”

Scharich can’t remember what piqued his interest in cars. However, he said he was “bit by the tinkering bug” at age 10 and started tearing apart lawn mowers. On his birthday the following year, his parents bought him a cheap socket wrench set.

“I didn’t turn the interest down, and I ran with it,” the former appliance repairman and welder said. “At 16 years old, my father trusted me enough to fix the brakes on our family vehicle. I guess he was excited to save some money.”

The Tune-up parties lead into the the Main Event week kicking off Monday afternoon with a new event in Birch Run.

Back to the Bricks Begins

Amber Taylor, executive director of Back to the Bricks, said she expects the excitement to continue after record-breaking participation during Tune-Up week.

Back to the Bricks week kicks off from 4-8 p.m. Monday, Aug. 16 with a car show at Birch Run Speedway, 10945 Dixie Hwy., in Birch Run. Awards will go out to top five vehicles voted by the people, and one overall Best in Show winner selected by Back to the Bricks.

The following day, a showing of the “The Italian Job,” a 2003 American heist action thriller film during “Bricks Flicks” at US-23 Digital Drive-in Theater, 5200 Fenton Road, in Mundy Township will take place. Gates open at 5 p.m. and the movie starts at dusk.

On Wednesday Aug. 18 and Thursday, Aug. 19, excited crowds will line the streets for the “Rolling Cruises” as the parade route stretches from the “red bricks” of Saginaw Street in downtown Flint to Grand Blanc.

The cruise begins with a ribbon cutting ceremony at 4 p.m. Wednesday at Factory One, located at 303 W. Water St., in Flint.

Events on Friday, Aug. 20 include a car show and a live concert, featuring The Reflections and the Motortown All-Stars that takes place at 7 p.m. on Saginaw Street across from U of M pavilion in downtown Flint.

The main event day will commence with an opening ceremony at 10 a.m. Saturday with a salute to veterans and active-duty personnel. Following the ceremony, at 11:05 a.m. and 2:05 p.m. local rock band, 3RD° BURNS will perform.

The remainder of the day will be full of opportunities to check out the automotive vendors, cars and get food.

For more details about the week’s event, visit the Back to the Bricks website.

Back to the Bricks Main Event Week to kick off with new car show, pay homage to Genesee County leaders