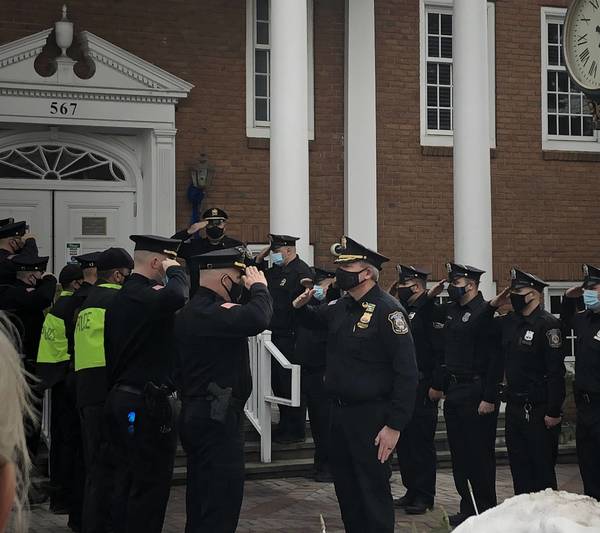 Town officials, family, friends, and residents also were in attendance at the ceremonial walkout to pay tribute to the chief they highly respected and wish him well.

John Zimmerman began his profession in law enforcement in 1990 as a patrol officer and from then on was promoted every couple of years.  On July 1, 2013, he became the Chief of Police and worked assiduously for seven and a half years until his very last day in office.

You have successfully signed up for the TAPinto Kenilworth Newsletter.

Members of the department had kind words and praise to say about Zimmerman and his time as the chief.

Administrative Assistant Diane O’Neill: Chief Zimmerman set an excellent example for all to follow. He is second to none. It was an honor, privilege and pleasure working with such a man of high caliber for the past 19 years. Saying he is going to be sorely missed is an understatement.

Det. Ryan Kernan:: It was an honor to be able to work with a member of the Kenilworth Police Department who worked with my father, George F. Kernan III. As a young boy growing up as his neighbor, I always considered him part of the family. Congratulations!

SRO Brian Pickton: It was a pleasure to work with Chief Zimmerman for the past 17 years. His ability to treat officers and the public alike with respect and kindness is going to be missed. I wish him much success in his well deserved retirement.

Sgt. Ed Paster: It was a pleasure working for Chief Zimmerman and I wish him nothing but the best in his retirement and future endeavors. As a long time resident since my childhood, I have known Chief for years. His service to the Borough and the residents that live here was nothing short of exemplary. Congratulations and all the best!

Chief of Police Fred Soos: It was an honor and pleasure to work with such a gentleman. I wish him success and health in his retirement. He will be sorely missed.