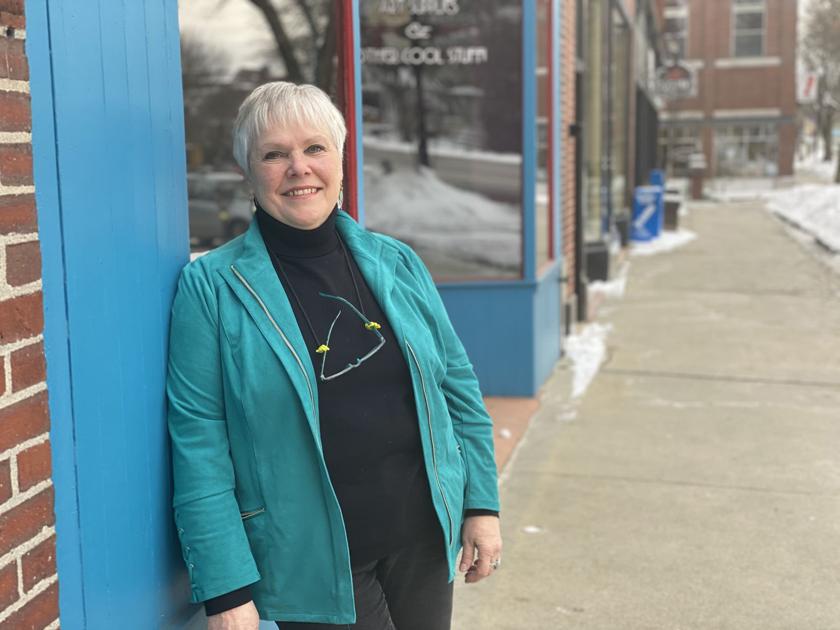 When Karen Lyle chose to shut down the business she ran for over 35 years in downtown Keene, she saw it not as an ending, but as a new beginning.

Late last year, Lyle announced that Creative Encounters, which she had operated at 17 Main St. since 1985, would close to the public on Dec. 23. The art supply and framing shop had long been a staple of the downtown community, but Lyle said she realized over the summer that she was ready to close the book on that chapter of her life.

“I realized it was time,” she said. “When people said, ‘When are you going to retire?’ I would just say, ‘You know, I think I’m going to wake up one day and go, ‘I’m done.’ And that’s exactly what happened.”

In her years downtown, Lyle was heavily involved not only with Keene’s business community but also its arts scene, helping launch projects like the ArtWalk. And while moved by the outpouring of support since announcing the store’s closure, she says she’s excited for what comes next.

Lyle, 70, is a native of Washington state who moved to New England when she attended college at the University of Rhode Island in Kingston, where she studied historical design and teaching. She came to the Monadnock Region shortly thereafter with her first husband, and has lived in Keene since 1987.

The long-time multimedia artist and educator said she has always had a passion for color and design. In the years before she opened Creative Encounters, Lyle ran the community education department in the Fall Mountain Regional School District, and she realized there wasn’t a convenient place in the area to buy the art supplies she often used with her students. So she decided to create that place herself.

In 1984, she opened the first Creative Encounters location on Court Street, in the building now occupied by Machina Arts: Kitchen and Artbar. Less than a year later, the business moved to Main Street, where Lyle would play an integral role in a number of downtown activities, including the development of Keene’s ArtWalk, which is still going on today.

Though the business got its start as an arts and craft supply store, “We discovered very quickly that you can’t pay rent selling wiggly eyes,” Lyle quipped. She eventually added framing to the business, and over the years, the store became a hub for artistic projects and home décor.

“What is Creative Encounters? It’s just that,” Lyle said. “Every encounter that took place in the store, or around the store, had this sort of creative bent to it.”

She said her goal was to foster creativity by helping people complete their projects, and showing them they have the power to figure out what works for them on their own. She encouraged her staff to always say “yes” when a customer asked for help, she said, and to work to find a unique solution to whatever the customer was looking for.

Lyle’s efforts to promote the arts in Keene were not confined to the walls of her business. She has long been active with the Keene Downtown Group, an organization she joined shortly after moving her store to Main Street, when, she said, she was the only female business owner on the strip. She also started a window display competition that lasted for several years, but it’s the ArtWalk that has left a lasting mark on the community.

The event invites artists to display their work in downtown storefronts, encouraging the community to enjoy the art and support local commerce. Lyle said the event has been going for 30 years, and continued on last year through the COVID-19 pandemic, with the 2021 ArtWalk set for May 29.

During her years downtown, Lyle and her business didn’t just leave a mark on the arts community, but on her neighbors as well. Judy Rogers, owner of Prime Roast Coffee Co. next door to the former Creative Encounters space, said Lyle became a close friend. She was emotional when discussing Lyle’s retirement.

“It’s a hole, it’s a hole in downtown and a hole in my life,” Rogers said. “Her shop was one of the cornerstones of Main Street for so long. But she pushed downtown, other merchants, to be better.”

Rogers, who has been in business beside Creative Encounters for 25 years, said she hopes that whoever moves in is just as dedicated to the community and its betterment as Lyle was.

Others are feeling emotional about Creative Encounters’ closure as well. Lyle said she’s received a number of letters from customers thanking her for helping them bring color and life into their homes.

“There’s nothing more valuable than to have somebody say how important you were to them,” she said.

But she’s not feeling down about what she called “the end of an era.” While she felt some nostalgia as she cleared out the building, she said the past few months have been exhausting, and she’s looking forward to getting back to her artistic roots as a painter, traveling and spending time with her family, which includes her husband, Bob; four adult children; and seven grandchildren.

She plans to remain active with downtown businesses, including by continuing her role in organizing the ArtWalk.

While many businesses have closed over the past year due to the pandemic, Lyle said Creative Encounters had a solid 2020, and financial difficulties did not factor into her decision to call it a day.

When she first opened the store, she said, she was the young person bringing a little life to a group populated by experienced businessmen. Now with the city seeing a spike in young professionals, entrepreneurs and politicians, she’s ready to give the next generation a chance to lead the way.

“I’m seeing all this young energy stepping in,” she said. “When I stepped in, it was that young energy coming in as well. So things change, but they stay the same. It’s a turnover time, which is wonderful.”