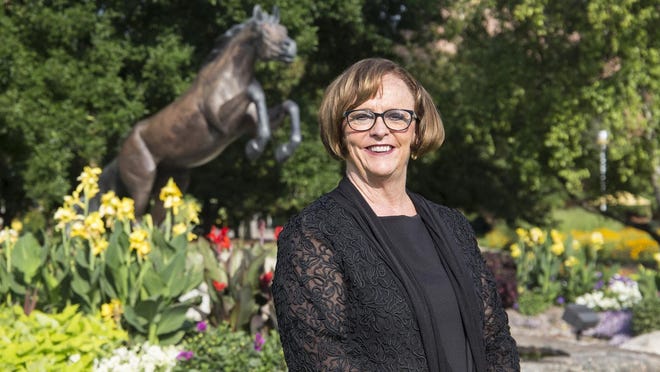 Western Michigan’s Kathy Beauregard, the longest-serving athletic director at a single school in the nation and one of just nine female athletic-department executives in the Football Bowl Subdivision, is calling it a career at year’s end.

“It’s been an incredible honor to serve in this university community,” Beauregard said in a statement. “I’m so proud of what WMU intercollegiate athletics has achieved as a team over the years — first and foremost, helping to coach and develop the most exceptional student-athletes in all of college sports.”

“It’s difficult to step away from them, from my colleagues and what we’ve built together, but I’ve been blessed to have a wonderful career.

“I’m filled with gratitude as this chapter of my professional life comes to a close.”

Beauregard began pondering retirement in 2020, as the pandemic ravaged the budgets of many athletic departments, particularly those in the mid-major category. Western Michigan already was slashing its athletic budget by more than $2 million before coronavirus took hold of the country, and then upped that to $6 million in the early stages of the pandemic, with everyone, department-wide, taking pay cuts.

During the pandemic, she also battled COVID-19, and other minor health issues.

In Beauregard’s tenure as AD, Western Michigan won 58 Mid-American Conference championships, most notably 2016 in football, when the Broncos went to the Cotton Bowl. The Broncos have made 36 NCAA Tournament appearances on her watch.

“She dedicated her life to advancing our student-athletes and Bronco pride from the moment she joined WMU to coach gymnastics in 1979, through her years as an assistant athletic director and then head of the division,” WMU president Edward Montgomery said in a statement. “The results of her leadership speak for themselves.”

Beauregard also had a knack for picking out rising stars in the coaching world, hiring Jeff Blashill as hockey coach (now the Red Wings’ coach) and P.J. Fleck as football coach (now Minnesota’s coach). She had gotten Fleck to agree to a long-term, lucrative extension late in the 2016 season, before Minnesota came calling after the 13-1 mark. She hired Tim Lester as Fleck’s replacement; this year’s Broncos are 5-3 entering Wednesday’s home game against rival Central Michigan.

When she hired Fleck in 2012, he was 32, the youngest FBS head coach in the country. He was a wide receivers coach with the NFL’s Tampa Bay Buccaneers.

He coached at WMU for four years, leading the Broncos to three bowl games. He’s made two bowl games in his first four seasons at Minnesota.

“I want to thank Kathy for taking a chance on me as a first-time head coach when I was just 32,” Fleck told The News on Monday. “She fully believed and supported our vision for the program right from the outset.

“Her trailblazing leadership, mentorship and friendship have been, and continue to be, extremely instrumental in my life and career as well as so many others. I wish her all the best in her retirement.”

Blashill coached just one season at WMU, and Beauregard allowed him to get out of his contract so he could accept an assistant-coach position with the Red Wings.

“I honestly get a little emotional just thinking about it, what she did for me,” Blashill said Monday. “She not only gave me the opportunity at Western, but she gave me the opportunity to leave and she could have made it way harder, but she knew my dream was ultimately to be a head coach in the NHL. .. I owe her a ton, and Western Michigan University owes her a ton. She’s a fabulous human being.”

Beauregard also hired Steve Hawkins to coach men’s basketball; he lasted 17 seasons before Beauregard made a change just before the pandemic hit in 2020. That decision was particularly gut-wrenching for Beauregard, given Hawkins’ long tenure, and especially after UM assistant Saddi Washington turned the job down, and the school instituted a hiring freeze. Clayton Bates was promoted from assistant to head coach.

She also made a hockey hire this offseason, when longtime coach Andy Murray resigned after 10 seasons; she promoted Pat Ferschweiler. Western Michigan’s hockey team is currently ranked 10th in the country.

A Hope College alum, Beauregard, 63, was hired as gymnastics coach in 1979. She earned her master’s degree at Western Michigan in 1981, and was named associated athletic director in 1989.

She was named athletic director in 1997, and made nearly $300,000 under her most recent contract.

“I really never knew when the time would come to consider retirement, since I pride myself on the passion I wake up with every morning challenging myself with how we can grow and commit to championship excellence in intercollegiate athletics and within the university,” Beauregard said. “I find myself now in the world of intercollegiate athletics that is in a total state of transformation nationally.

“This transformation tells me this is the perfect time for me to step aside and retire and for WMU to hire a new leader to steer athletics into the future.”

All six of Michigan’s other Division I institutions have had a change in ADs within the last six years, including Amy Folan taking over at Central Michigan last year. Folan and Beauregard are two of the nine female athletic directors in the FBS.

The university said it is immediately launching a national search for her replacement.