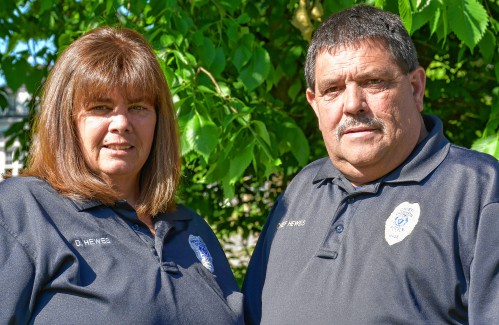 GOSHEN — Since 2000, Chief Jeffrey Hewes and wife Donna Hewes have served together in the Goshen Police Department, braving bad weather, navigating a close-knit community and experiencing a nearly unthinkable personal tragedy. Now, after more than two decades in their respective jobs, they are retiring.

“The time was right,” Jeffrey Hewes said. “The retirement board said we were good to go.”

“I’m relieved,” said Jeffrey, on retirement. “There’s just a number of things that you see over the years that you can’t get rid of.”

Together the couple represents two-thirds of the town’s Police Department.

The Select Board voted last week to appoint Goshen police officer William Bissell as interim police chief, effective June 30. Select Board Chairwoman Angela Otis said the board plans to take up the future of the department and its positions in the near future, at what she expects will be a series of meetings.

Jeffrey Hewes joined the department in 1996. At the time he was working at a body shop, where his foreman and his foreman’s father were both police officers.

“They always told me don’t get in that field,” Hewes said.

He did not heed this advice and in 2000 Hewes was made chief. That same year, Donna Hewes, became a police officer, having taken the job of administrative assistant for the department in 1996. Donna Hewes said that she became an officer in order to better answer questions and to run programs.

“I like the community policing aspect of it,” Donna Hewes said.

She works part-time for the department, and while Jeffrey Hewes’ position is technically 20 hours a week, he said that he normally works 38 hours or more a week.

Jeffrey Hewes said that serving in Goshen has “always been good.” However, it does come with a bit of a challenge.

“Ninety-eight percent of the time anybody we’re stopping we’re probably related to,” Hewes said, attributing this observation to his wife.

“Nobody gets a freebie,” Hewes said. “Don’t put us in that predicament.”

Donna Hewes has lived in Goshen all of her life, while Jeffrey Hewes moved to town in 1983. The pair went to high school together although they didn’t start dating until after, marrying in 1985.

“It was less than a mile from the house,” Jeffrey Hewes said.

Both he and Donna responded to the scene, as did their daughter Erica, who was serving as an EMT at the time.

The crash involved Tyler’s cousin Edward Roberts, who had been drinking. He was convicted of negligent motor vehicle homicide while under the influence of alcohol and served a year in jail.

In response to the tragedy, Jeffrey and Donna Hewes started the Buckle Up for Tyler program, which teaches about the dangers of drinking and driving and encourages people to wear seat belts. The program has been run in multiple area schools and Roberts has been very involved with it. Other police departments have assisted with the program.

“We always felt if we could make one kid safe by running this program it was worth it,” Donna Hewes said.

She also talked about the youth programs the department once ran in Goshen.

“There was a need for the kids in this area to have things to do,” Donna said.

Some of the activities the department did were week-long camps with the kids, bus trips to Mystic Aquarium, baseball games in Pittsfield, and fishing derbies.

“We really didn’t have trouble with the kids that we ran programs for,” Donna said, who noted the programs stopped after they lost state funding.

Both Jeffrey and Donna took issue with the department in Goshen not receiving enough funding.

In terms of their retirement plans, Donna said that they will enjoy one another’s company more. And the pair also noted they’re looking forward to a bit of a unique perk.

“We want to know what it’s like to go through a snowstorm and be able to stay home,” Donna Hewes said.

The couple also said that they intend to stay in Goshen for the time being.