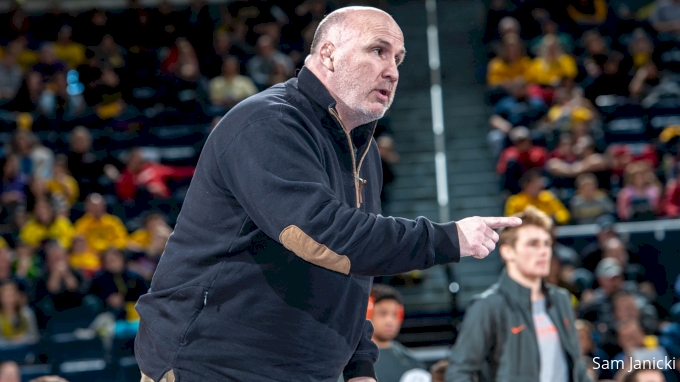 CHAMPAIGN, Ill. – Jim Heffernan, who helped lead the University of Illinois wrestling program to 13 Top-10 finishes at the NCAA Championships, announced his retirement today after 12 years as head coach and 29 years overall with the Illini wrestling program.

Considered one of the most prominent collegiate wrestling coaches in the nation, Heffernan coached 73 All-Americans, 215 NCAA qualifiers, 11 individual NCAA champions and 20 Big Ten Conference champions during his time at Illinois. He helped lead the Illini to Top-10 finishes at the NCAA Championships 13 times, and during his coaching career in Champaign, the Illini have had at least one All-American on the roster in 28-consecutive seasons.

“For nearly three decades, Jim Heffernan has dedicated his life to Illinois Wrestling,” said Director of Athletics Josh Whitman. “He represents our athletic program’s most closely held values: he cares deeply about his student-athletes and his colleagues, and he embodies toughness, competitiveness, and hard work. Through his actions and his words, he has been a leader, mentor, and friend to many. Our program will miss him. On behalf of Fighting Illini Athletics and the University of Illinois, I want to thank Jim and Rebecca for their long service to our university, and I wish them much happiness in retirement.”

Heffernan guided the Orange and Blue to numerous record-setting performances. In 2015, Heffernan coached Isaiah Martinez to the first undefeated season (35-0) by a freshman since Cael Sanderson did so in 1999 at Iowa State, and to a second NCAA title in 2016. Martinez was a four-time Big Ten champion. In 2014, Tony Dallago became the Illinois’ all-time leader in career pins (40), while Alex Tirapelle set the school record for career wins (128). He helped Jesse Delgado to consecutive NCAA titles in 2013 and 2014. As a team, the Illini set the school record for dual victories in a season with 16 in 2011.

“I am grateful to the University of Illinois, Josh Whitman and the entire Division of Intercollegiate Athletics for the opportunity to be a part of the Illini community for more than half my life,” Heffernan said. “For the past 29 years, Rebecca and I have lived, worked, and raised our children here, and it has truly become home. I am most appreciative of our current and former student-athletes who have been loyal, committed and dedicated to the Illinois program while giving us four or five years of their lives. The Illinois program has afforded me life changing memories, experiences and relationships. The decision to retire has been challenging to say the least, but I feel great about the current group and the future of the program. Forever grateful, appreciative and proud to have been a part of Illini Athletics. I-L-L!”

Heffernan began his coaching career as a graduate assistant at the University of Iowa before becoming an assistant coach at Lehigh University in 1988. He remained at Lehigh until moving to Oregon State in 1990, and he followed former Illini head coach Mark Johnson to Champaign-Urbana in 1992. As an assistant coach with the Illini, Heffernan earned NWCA Assistant Coach of the Year honors in 1995, 2001, and 2003, before taking over as head coach in 2009.

In 2005, Heffernan helped lead Illinois to its first Big Ten Championship since 1952, as Alex Tirapelle (157-pounds) and Pete Friedl (174) took home individual Big Ten titles out of five total finalists for the Illini. The team finished sixth at the NCAA championships in 2005 after qualifying nine wrestlers, while 125-pounder Kyle Ott made a repeat appearance in the finals. The team had five grapplers earn All-America honors for the second consecutive season.

Heffernan also has an international coaching background, as he led the Cadet Wrestling Team at the world championships in Istanbul, Turkey, in 1992, and the USA World Espoir Team in 1989.

Prior to entering the collegiate coaching ranks, Heffernan was an exceptional athlete and competitor on the mat. A 1987 graduate of the University of Iowa, Heffernan was a four-time All-American, compiling a career record of 131-18-2. As a member of the Iowa wrestling program from 1983-1987, Heffernan helped lead the Hawkeyes to three NCAA and four Big Ten championship titles. He was also a four-time Big Ten Conference individual champion while winning an NCAA title at 150-pounds in 1986. Heffernan was captain of the Hawkeyes as a senior, and earned Iowa’s Male Athlete-of-the-Year honor in 1987. He was inducted into the National Wrestling Hall of Fame in 2006 and the National Iowa Varsity Club Athletics Hall of Fame in 2015.

AFLAC Assistant Coach of the Year (2003)

Illinois By the Numbers During Heffernan Era

-28 straight seasons with at least one All-American