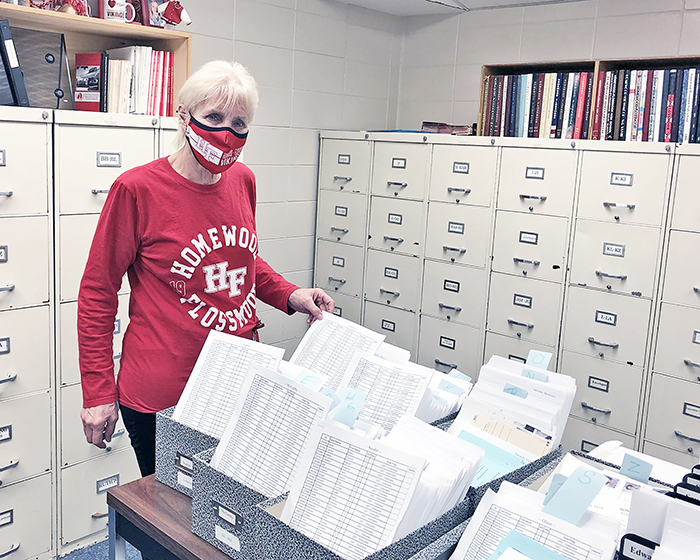 Editor’s note: This is the first story in a series featuring 2021 school retirees.

When Homewood-Flossmoor High School conducts its graduation ceremony for 715 seniors this month, Ruth Strugala will be there with her lists for the last time.

As the school’s registrar, it is one of Strugala’s jobs to make certain all eligible graduates are on the list with the correct spelling of their names on their diplomas. She’s also gone through each graduate’s paper file, and she will be surprising them with elementary school picture enclosures. The pictures were forwarded to H-F as part of the student’s permanent record.

Strugala is happy to retire in June after 21 years at H-F. Being the school’s registrar was her last job. Over the years, she’s moved to several departments serving as secretary to deans and department chairs. Her jobs have been to keep things organized and she says she’s always had lists.

“My experience is it’s a different list. Summer school, career fair, you’re keeping a list,” she said. “In the superintendent’s office and human resources it was contracts and hiring lists. It doesn’t really matter because all your lists need to be correct.”

Strugala has put together a binder of instructions for the next registrar. She’s set out timelines with important dates for graduation planning, how to make grade changes, verify transcripts and more. As much as she’s tried to be as complete as possible, Strugala admits there are “little things (about the job) in my head. How am I going to tell somebody that?”

“Summer is your busiest (time) when people are enrolling and withdrawing,” she said. “(For) students enrolling, you have to get transcripts and those withdrawing you’re sending (transcripts) to the other school. It’s just a lot of paperwork.”

When school starts, the registrar begins planning for the next graduation. In September she’s already starting her list of the graduating class. In November, she’s ordering the red diploma covers. In January, she’s entering the students graduating early and, in normal times, she would post the graduate lists in H-F hallways to give seniors the chance to check the spellings of their names. By March, she’s ordered the diplomas, got the envelopes ready and labeled.

The registrar is also adding grades every quarter for the nearly 3,000 student records. Strugala keeps both paper and electronic records. It’s a tedious job that requires her to make certain each grade is correctly classified for college prep, advanced placement or international baccalaureate status.

Mistakes happen. On average, she’ll be adjusting grades for 50 students, but when H-F first was dealing with COVID in spring 2020, final grades were being adjusted as well. Strugala said she had to record 600 changes.

Strugala’s office is also responsible for transcripts. Once she knows the student has paid all fees, she will print the transcript on official paper and imprint the registrar’s seal. The transcript goes into an envelope that also gets a special seal. If the seal is broken, the person receiving the transcript will know it’s been tampered with it.

Strugala admits she’ll miss being at H-F, but working from home during COVID has given her a chance to see what retirement will be like.