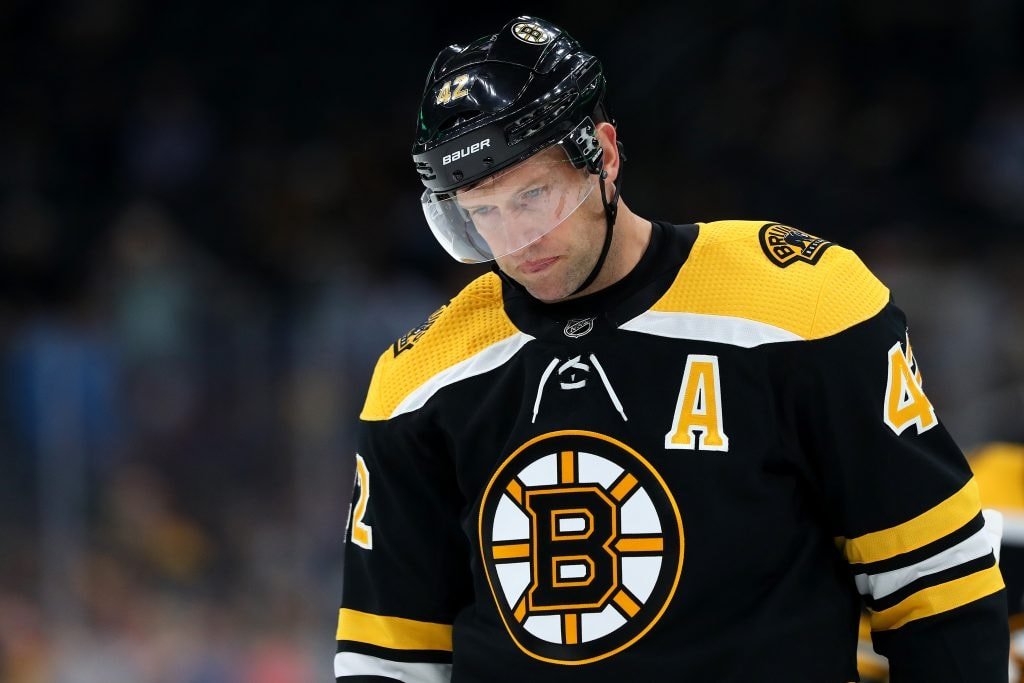 BOSTON, MASSACHUSETTS – SEPTEMBER 23: David Backes #42 of the Boston Bruins looks on during the first period of the preseason game between the Philadelphia Flyers and the Boston Bruins at TD Garden on September 23, 2019 in Boston, Massachusetts. (Photo by Maddie Meyer/Getty Images)

Still unsigned and with the NHL season just over a month away, former Bruins forward David Backes has officially called it a career and announced his retirement from the game of hockey.

The 37-year-old Backes, a 15-year NHL veteran with three franchises, made the announcement official Thursday by signing a one-day contract with the Blues to retire with the team he captained for five seasons.

In between his start with the Blues and ending with 21 games with the Ducks over the last two seasons, Backes was with the Bruins, where he totaled 39 goals and 94 points in 217 games over four seasons with the Bruins.

“My stretch in Boston is something I am so grateful for,” Backes wrote in his farewell to the NHL. “It was an amazing group of men that I was able to play with and grow alongside of. Arriving there and being a complementary piece to the great core that had been there since they won the Stanley Cup in 2011 was an incredible learning experience for me. I learned about leading from the rear and was able to pour into teammates in ways I had never been able to do before.”

A welcomed voice in the B’s room, Backes battled injuries throughout his time in Boston, and had some straight-up rotten luck throughout his tenure. From concussions to diverticulitis to a skate to the face, Backes had trouble staying on the ice and producing at the same level he did in St. Louis and at the expectations that came with his $30 million contract, tallying no more than 17 goals and 38 points (both in 2016-17) in any of his seasons in Boston.

The switch from Claude Julien to Bruce Cassidy did little to help Backes bounce back from an offensive standpoint, and he quickly turned to a roleplayer with the Bruins, even during their 2019 run to the Stanley Cup Final.

“Our remarkable march to the Stanley Cup Final in 2019 was filled with some of the highest highs and lowest lows I have experienced in the game, but I am appreciative of all of them,” Backes wrote. “I never thought I would so intimately live the words I said when leaving St Louis: ‘If the team I was playing on wasn’t going to win the Stanley Cup, I hoped it would be the Blues.’”

Refusing to quit, Backes worked with a figure skating coach, slimmed down, and tried to carve out a spot for himself in an enforcer-like role for the Bruins, which left some in the organization a little squeamish given Backes’ concussion history.

Waived and told not to report to the minors, the 6-foot-3 Backes was ultimately sent to the Ducks in a deal that allowed the Bruins to clear out all but $1.5 million of his $6 million cap hit through 2021, as the Bruins also parted with prospect Axel Andersson and a 2020 first-round pick to send Backes packing for Ondrej Kase.

The fresh start in SoCal didn’t change much about Backes’ future in the league, and the ex-Blue ultimately suited up for his final NHL game on May 5, 2021 — and in fitting fashion — in St. Louis and against the Blues.

A Minnesota native, Backes will retire having played the 60th-most games among American-born players in NHL history, with 965, and with one All-Star Game honor (2011) and a Selke Trophy finalist (2012) to his name.

Click here for 98.5 The Sports Hub’s complete coverage of the Bruins.

Ty Anderson is a writer and columnist for 985TheSportsHub.com. Any opinions expressed do not necessarily reflect those of 98.5 The Sports Hub, Beasley Media Group, or any subsidiaries. Yell at him on Twitter: @_TyAnderson.