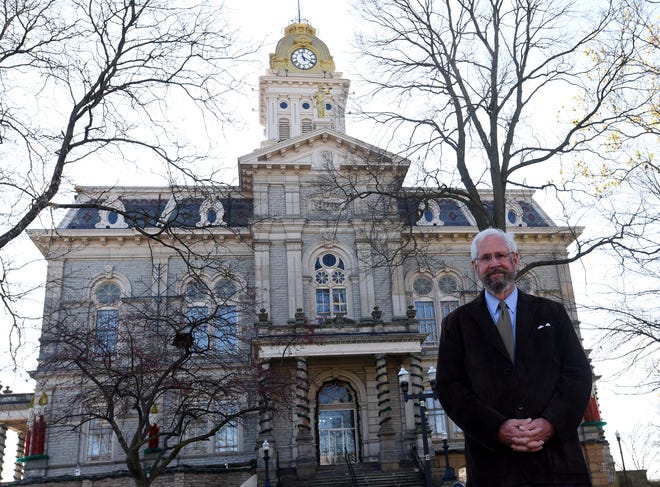 In a memo to his staff last week, Hoover announced he would be presiding over his last case on Jan. 22. His term ends in February as he retires, prohibited by age from re-election. Next month, Deborah Lang will take the helm.

Quoting Maya Angelou, Hoover told his staff that people will forget what one said or what they did, but will never forget how one made them feel. He said he thanks God for the opportunity to serve others.

During an interview with The Advocate, Hoover reflected over his career, where he started and the cases that changed him along the journey. As he steps into retirement, his commitment to the community is far from over as he plans to remain involved in organizations such as Friends of the Licking County Library and other groups.

With a history of public service in his blood dating at least as far back to a great-uncle who served as Licking County’s sheriff between 1928-1932, it’s no surprise Hoover’s life’s work has also been engrained in service to his community.

As a Franklin County high school student, Hoover said he found a love of government and in his first year of college, he’d decided he wanted to be a lawyer. He started working at Licking County Juvenile Court in 1976 under Judge Virginia Weiss then became an assistant county prosecutor working in the same court.

He was appointed to his current position by then Ohio Governor George Voinovich in 1996 after his predecessor died in office and in the late 1990’s was elected to the position he’s held ever since.

In his first year in office, Hoover and his team implemented many of the programs still used in juvenile court today.

Hoover went on to explain many of the youth that appeared before him had low self-esteem and sometimes have been told by a parent or others that they’re not good or stupid.

Early on, Hoover said they started the 40 developmental assets, teaching youth a series of questions that would help guide them toward making better decisions. They also started a truancy board in Licking County’s high schools, which spread to middle schools, and invested in distributing newspapers to area schools to improve students’ reading skills.

In addition to those programs, Hoover said he often speaks to students countywide through the Salvation Army’s summer camps and mock trials.

Among the thousands of cases Hoover has presided over in his tenure, the most challenging, but sometimes also the most rewarding cases have been those involving child abuse and neglect.

Hoover tearfully told the story of “Johnny,” a boy who at 9 or 10 had been removed from his home due to chronic neglect and abuse by his parents. The judge said the boy was placed into a foster home, and eventually under permanent custody of children’s services, where he saw several foster homes due to poor behavior.

“I hear adoptions on Tuesdays. And usually, the adoptions that I hear, you’ll have a mom and a dad, an attorney, maybe a grandma and grandpa, maybe a sibling,” Hoover recalled, his voice choking. “In this case, the courtroom was packed. Every single seat was taken and people had to stand.”

In the courtroom filled with family members, friends, loved ones and church members, Hoover said every person wore a Superman, Batman or Spiderman scarf. Clad in a dress shirt, coat and tie, Hoover said the child was smiling ear to ear as his attorney asked if the judge too would wear a scarf. As he told the story, Hoover had a Superman scarf hanging around his neck.

Hoover became teary-eyed again as he shared how the boy’s adoptive mother explained her son’s longtime superheroes – Superman, Batman and Spiderman – also happened to be adopted.

“It was a wonderful morning, a wonderful day. I granted the adoption,” Hoover said. “I’ve told this story to many people about this wonderful family who adopted this wonderful boy who never knew the love of a father or mother. And that’s what he found in this family – unconditional love.”

A couple years ago, Hoover said the story came full circle, when he told the story to the director of Ohio CASA (Court Appointed Special Advocates) who used that concept to develop posters with their public relations team.

Along with adoption cases, Hoover said one of the best parts about his job is when on occasion a young adult thanks him for the difference he made in their life.

For the Licking County officials he’s worked alongside, Hoover’s legacy is his love of the courthouse and the impact he’s had on youth over the years.

Licking County Common Pleas Court Judge Thomas Marcelain recalled meeting Hoover in the early 1980’s after he returned to Newark from law school. Both served on the board for Big Brothers Big Sisters during that time.

“He’s always been so great to work with, with so much knowledge about the courthouse and how things work,” Marcelain said. “He had a great love of the courthouse. You just couldn’t get him out of here, short of retirement – over his dead body is what he always said.”

Marcelain recalled the many times he’d be sitting in his office when he heard a noise in the courtroom only to find Hoover was giving a group of kids a tour.

“He was constantly doing that, always very proud of the courthouse and its history and wanted to explain that to the students, trying to motivate them I think, to grow up to be lawyers and judges,” Marcelain said. “I think mostly that’s the impact he’s had on kids in Licking County, is just trying to show them the opportunities that are available to them and encouraging them.”

According to Marcelain, Hoover was working with a previous juvenile court judge when they established many of the procedures that are still used in the courtroom, and he was instrumental in helping set up the current juvenile detention facility.

Of all the things Marcelain has learned from Hoover, he said it’s patience and that things come around if one works hard enough for them.

“I certainly saw that when he worked juvenile court for a long time, then ran for judge and (initially) was not successful,” he said. “Another opportunity for probate/juvenile judge came up, and he was successful the second time. That was always where his heart was, always where he wanted to be and what he wanted to do. He finally got a chance to do that as long as he could.”

Licking County Commissioner Tim Bubb, who was recently sworn into office for a fifth term by Hoover, described the judge as an “extremely dedicated public servant.”

Bubb said as he and Commissioner Duane Flowers departed from being sworn in from Hoover’s courtroom, they encountered a man looking for Hoover to thank him for turning his life around. Bubb became emotional recalling what he described as a powerful moment.

“People are so jaded about public service and the difference people can make. I told him that is exceptional he turned his life around and was coming to say thank you,” Bubb said. “That told me a lot about Judge Robert Hoover. People always think about the judge putting the hammer down on somebody … I think his legacy is that he likes people and he’s tried to make a difference as a judge and public official in people’s lives and serve.”

In addition to being an advocate of many intervention programs and innovative as a judge, Bubb said he believes Hoover has viewed himself as a tool for trying to do good during his tenure, which is an awesome legacy to have.

Looking toward retirement, Hoover said although he’s somewhat limited due to the pandemic currently, he plans to stay active.

“I’m going to continue to be very active with the Friends of the Licking County Library. I’ve been a volunteer at the Salvation Army, serving meals in the kitchen,” Hoover said. “I’ve had to take a leave of absence because of the coronavirus, but once that passes, I’m going to be back doing volunteer work at the Salvation Army, working in the kitchen and passing out meals.”

Hoover said he also hopes to become a volunteer with the Licking Park District and get involved in more activities at his church, St. Francis de Sales.

The judge encouraged community members to be active with the community’s youth, whether through programs like the Yes Club, Big Brothers Big Sisters, or other groups.