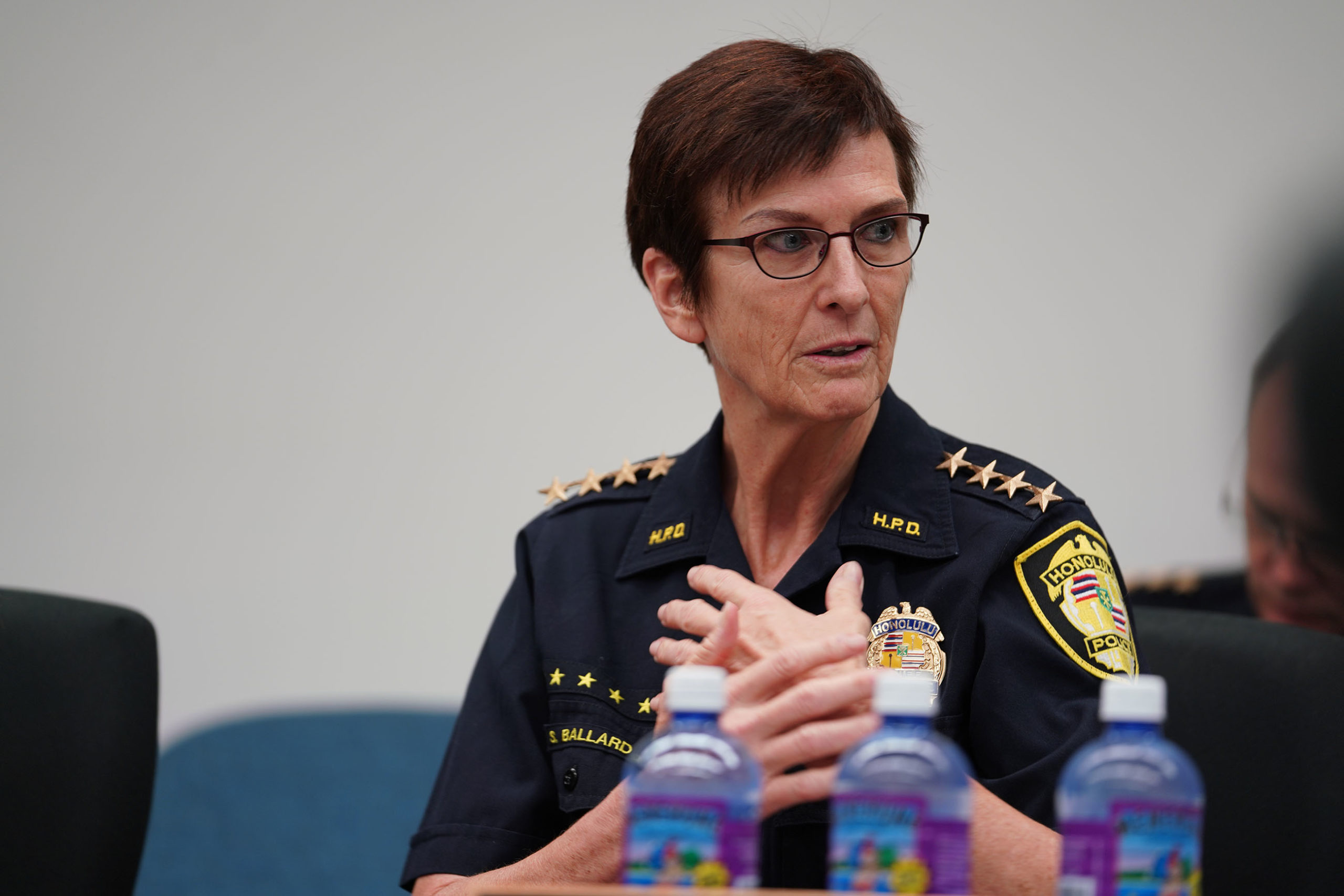 Honolulu Police Chief Susan Ballard announced in a video post on Friday afternoon that she will retire as of June 1.

The resignation follows scathing feedback this week from the Honolulu Police Commission which said it would put the chief on a stringent performance improvement plan.

Ballard appears to have taken that evaluation as a vote of no confidence.

“The Honolulu Police Commission has been taking a more active role in the running of the department, and it has become increasingly clear that I no longer have the trust and support of the police commission and the new mayoral administration,” she said in the video posted on the department’s YouTube page and also sent to HPD employees.

Ballard’s contract wasn’t set to expire until the end of 2022. She has served in the department for 36 years, which she called “a privilege.”

She thanked officers for their service and said she was proud to serve as chief.

“Mahalo to the community for its continued support of the Honolulu Police Department at a time when police departments across the country are faced with increasing challenges,” she said. “HPD is truly fortunate to serve and protect a community that cares for its officers as much as we care for you.”

On Wednesday, the commission delivered tough feedback on Ballard’s 2020 performance.

Members took issue with her ability to lead and manage the department. In particular, they concluded that the chief has failed to adequately communicate with her subordinates and the public and that she has fostered a “culture of blame” in which she evades accountability.

The review noted that morale has declined under Ballard’s leadership.

“At times, Chief Ballard did not accept constructive criticism and, within the Department, berated others in front of their peers,” the review states. “Some were happy, but many felt unfairly treated or retaliated upon.”

The commission put the chief on a 60-day performance improvement plan that required her to meet with her command staff, hold regular press conferences and take other steps to turn the department around.

The Honolulu Police Commission said in a statement on Friday that it had been looking forward to working with Ballard on the plan but will now shift its focus to a transition.

“We appreciate Chief Ballard’s many efforts, not only her more than 35 years in the department, but also three years as Honolulu’s Chief of Police where she spearheaded initiatives to assist the community with homelessness and COVID response programs,” the commission said in the statement sent from Chair Shannon Alivado.

“We thank Chief Ballard for her service and wish her the very best.”

In a press conference on Friday evening, Mayor Rick Blangiardi said he was disappointed to learn of Ballard’s retirement.

The mayor said he felt the commission’s evaluation was fair and accurate, but he disputed Ballard’s contention that his administration didn’t trust and support her.

“I did not lose confidence in the chief,” he said. “In fact, all of my conversations with her in private since becoming mayor, I believe, have been very supportive and encouraging towards her to lead and be the chief of police.”

Commissioners are appointed by the mayor. Blangiardi’s first nominee to the body, Benjamin Mahi, is currently awaiting confirmation by the Honolulu City Council.

Blangiardi said he wants to see a leader who is responsible for the performance of their department, is a good communicator and is “in touch with the times we are in.” He also noted that department morale is very important and that the chief must gain the confidence and trust of the officers they lead, as well as the community.

“From that standpoint, this job is extremely difficult so someone has to have a capacity to take on a lot,” he said.

In a statement, Honolulu Prosecuting Attorney Steve Alm thanked Ballard for her service and wished her well in retirement.

“We look forward to maintaining a good working relationship with HPD and its new chief when she or he is appointed,” he said.

Civil Beat reached out to Malcolm Lutu, the president of the police union, but did not get a response.

Steve Levinson, a former Honolulu police commissioner, interpreted the commission’s evaluation and improvement plan, as an ultimatum: Fall in line or leave.

“The qualities that she exhibited that caused us to select her as the best candidate back in 2017 are not necessarily the qualities that we need to see rising to the top at the moment,” Levinson said.

Ballard took over the department amid a corruption scandal involving her predecessor Louis Kealoha. She is HPD’s first female chief.

At the time of her appointment in October 2017, she pledged to restore trust and lead with accountability and transparency.

Over time, however, she became more and more withdrawn, insulating herself from questions and criticism from commissioners, the media and the Honolulu City Council.

In the last year, in particular, the department has been criticized for a litany of issues: a low crime-solving rate, ballooning overtime, dubious CARES Act purchases, racial disparities and more. In response, Ballard tended to dismiss criticism or ignore it.

HPD is likely to have an interim chief later this year as commissioners initiate a search for Ballard’s replacement, Levinson said. If this hiring process is anything like the last one, he said it could take a year or more to appoint a successor.

Sign up for our FREE morning newsletter and face each day more informed.