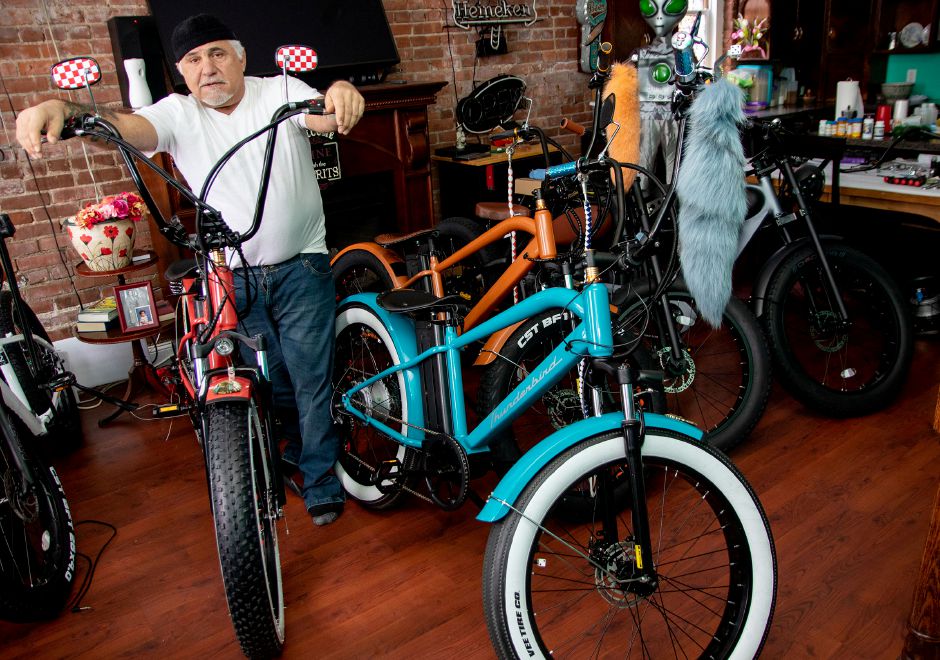 WALLINGFORD — After nine years of retirement, Joseph Derhovanesian, who likes to go by Joe Dee, decided to start a new venture after being disappointed by some of the electric bicycles on the market.

A couple years ago, Dee, 63, was in Venice Beach, California and was curious about electric bicycles. He decided to buy one, but found it “sluggish and lacked in style.”

That’s how Bad Boyz Electro Cycles got its start. Derhovanesian, who used to own a car dealership and auto body shop, had been in business for himself since he was 13 before retiring nine years ago. He started to think about what he wanted in an electric bike.

“I am custom painting them custom colors … with saddle seats, alligator skin, leather studded seats, white wall tires, these are like classic retro style,” he said. “… I put the high rise pink handle bars on them.”

Derhovanesian made a fleet of the bikes so people can stop by to see them, touch them and take them for a test ride by appointment.

His business is located at 4 Meadow St. Neighbor Kelly Hudson, owner of Posh Coiffure, said making the bikes “makes him so happy.”

“If I have time, he’ll be like, ‘Come over and look at them real quick’ and it’s amazing what he can do and how fast they go and everything,” Hudson said.

Because Derhovanesian is building a showroom and office in the back of his home, he said he is able to keep prices down. The bikes range from $600 to $3,200.

“It’s a dual-zoned building I have, commercial and residential,” he said.“I want everybody to be able to afford (an electric bike).”

After one month in business, Derhovanesian started selling globally from his website – https://www.badboyzelectrocycles.com/ . He now works with other manufacturers and sells some of their bikes.

“They’re not your average looking e-bikes,” he said. “They’re gorgeous, very unique and I am constantly developing new designs.”

Electric bikes  “are a perfect replacement for so many local car trips, and an even more powerful tool for change,” said Ken Martin, founder and CEO of California-based Mike’s Bikes. “We should be doing everything possible to help more people afford e-bikes, which will lead to more bicycle commuting, fewer car trips, less congestion, less carbon emissions and healthier lifestyles.”

Dee installs LED digital screens on the dashboard of the bikes. He also has a model that has a USB port for the rider’s phone.

In Connecticut, electric bikes do not have to be registered or insured. Dee has Class 2 and Class 3 bikes, with the Class 3 bikes a bit more powerful. Dee suggests people buy a Class 2 bike if they are just starting to ride an electric bike. His bikes can go between 20 and 50 mph. He also offers electric bike safety courses.

“I’m a risk taker, I’m an entrepreneur, I don’t work for people, I’ve never had,” Dee said. “I would not be able to work for anyone … This is my sixth business that I own.”