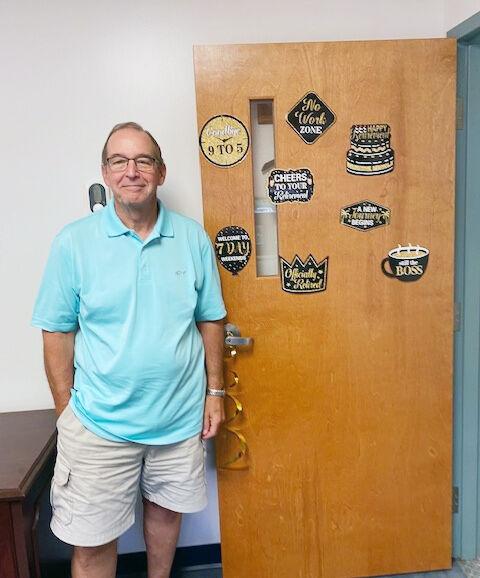 For Ron Davis, it’s one retirement down, one to go.

A little more than a week ago, Davis bade bon voyage to his 27 ½-year career at AccuTrex Products, maker of customized gaskets, shims and other products. He began working there in January 1994, 10 months after the company became the first tenant to open shop at the newly minted Southpointe business park. He left as the well-regarded director of inside sales.

Now he is planning another departure. Within two months, Davis intends to step down as chair of Washington County Manufacturer’s Association, a position he has maintained for 18 years with an organization to which he has belonged since 1977. His target for leaving is the association’s annual golf tournament Sept. 9.

“I told Steve McCarron, our vice chair (and an executive with Community Bank), that I was looking toward stepping down,” Davis said. “They (the WCMA board of trustees) probably thought that was never going to happen.”

He said the board is organizing a nominating committee to elect a successor.

“After the past year, with COVID and how things could change, I thought it was time,” he said during a telephone interview Tuesday. “My wife and I are healthy and want to enjoy life, and do a little traveling.”

In this family, apparently, retirement comes in pairs. Denise Davis retired a week earlier than her spouse, after 32 years with the Social Security Administration in Washington. She doesn’t, however, have a second position to leave. They are county natives and current county residents.

WCMA is the largest business association in the county, with 77 member companies or organizations located within its borders. The association was formed in 1972, with Dean Rogers elected as the first chair. W.T. Todd, an executive at Fairmont Supply, succeeded him in that position, serving from 1975 to 1992.

Davis, who joined the board in 1989, said the association “has changed a lot over time, as industry has changed.”

“In the 1980s, there was a shift from glass and steel industries in Washington and machine shops. We had to adjust a little in the ‘90s because of industry changes, and expanded to include more companies that support manufacturers. Banks, software companies and others joined.

“We really opened up our membership to keep us viable.”

Davis said industries “are more high-tech today, and companies have to keep up” with rapidly changing technology.

“Companies that remain healthy in Washington County are the ones that learn to adapt and reinvest in themselves,” he said.

Domestic manufacturing had declined in recent years, due largely to offshoring of jobs, but has picked up over the past year despite the pandemic. Jobs have been increasing nationwide, and especially in Pennsylvania, according to a recent post on military.com. It said the Keystone State was sixth among states in manufacturing jobs, with 14,211 – about 500 behind fifth-ranked Ohio.

“I agree that manufacturing is on the rise again,” Davis said. “As with everything, there are struggles. We lose some companies because of technology changes, and some go through cycles. But we see companies succeed because management changes with time.

“One great example is AccuTrex. Management has constantly adapted to changes in the industry. When the ‘80s started, the focus was on steel and mining. But we’ve been adapting to full-service fabricating. Now we service anything from coal mining to aerospace.

One of Davis’ hallmarks as WCMA chair has been the monthly industrial tours he has organized for members across the county. In recent years, they have featured walk-throughs at rose plastic, All-Clad, Channel Craft and Allegheny Technologies Inc., and included dinner at appealing locations. The tours usually attract large gatherings.

“I always want to learn something new about manufacturing, and so do others,” Davis said. “We have a wide scope of different industries in Washington County.”

His “second” job is an unpaid one, but it has been personally fulfilling for Davis – and provided benefits for WCMA members. That’s why he made a special effort to thank AccuTrex president and CEO Marty Beichner and his son, chief operating officer Mark Beichner, “for allowing me to be involved with (the WCMA). Marty and Mark have always been very supportive.”

They appreciate him back.

“Ron has been a great employer, mentor and friend,” Mark said. “He was the person who trained me when I came here in 1999. He provided a great wealth of knowledge at work, and was very instrumental in growing our fabrication division. He oversaw all estimating and order processing.”

Davis’ duties as an overseer have been formidable for a long time. Soon, he will oversee the pursuit of a more leisurely lifestyle.