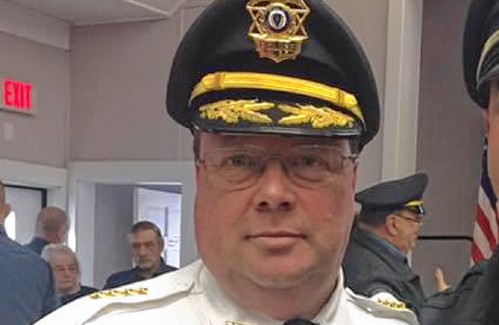 CHESTERFIELD – Edward Murray, who has been police chief since 2016, is retiring in June after a long career as a police officer.

“It’s definitely bittersweet,” said Murray. “I just knew the time was right to be on my way.”

Murray took over from Denise Wickland, who served as interim chief after her father Gary Wickland’s retirement from the post.

While serving as police chief in Chesterfield, Murray has continued to serve as a member of the Easthampton Police Department, where he has been an officer for nearly 29 years. Murray started his law enforcement career in Palmer at 18 years old as an auxiliary police officer. He went on to work as a firefighter and special police officer in Easthampton, before becoming a full-time police officer there in 1994.

Murray, 51, is retiring from both departments, as when he retires from one by law he has to retire from the other.

Easthampton Police Chief Robert Alberti said Murray’s retirement is well deserved. He said Murray is the department’s crash reconstructionist, does building security and firearms licensing, does radio communications for the department, and is Badge No. 2 on patrol.

“A lot of his experience in Easthampton really prepped him for the chief’s job in Chesterfield,” Alberti said.

Murray said that he did have an interest in staying on in Chesterfield, which would have been possible after a break in service, but the town wasn’t able to accommodate it.

He also said that he will miss his officers and the job he did there.

Murray, who lives in Westhampton, said he worried about being considered an outsider when he took the Chesterfield job. However, he said that was never case.

“I was accepted with open arms,” he said. “It was a worry of mine that never came to fruition.”

Murray’s last day in both jobs is June 21. However, he does intend to become a special police officer in Easthampton later.

He said that the lack of support for law enforcement in society contributed to his decision to retire, as did nearly maxing out his pension.

“The timing was right for me,” he said.

He said that he has some job offers outside of law enforcement, but he plans on taking the summer off and doing projects around the house.

Fuller said that the police chief position will first be posted internally and if a candidate is not found, it will be posted externally. He also said he believes there are people in the department qualified to take on the job.

Murray’s position in Chesterfield is a part-time one, and Fuller said that the chief’s job will continue to be part-time.